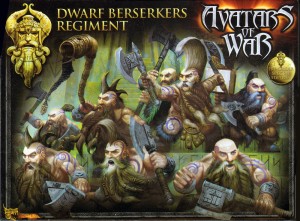 Avatars of War have been producing individual metal models for 4 years. The Dwarf Berserkers Regiment is both their first boxed set and their first plastic miniatures.

We are reviewing the pre-order special edition box that contains exclusive pieces for the command group.

On opening the box I was immediately impressed by the sheer number of components in this kit, the box contains 5 berserker sprues and 1 command sprue, all crammed full of components. It also seemed to me that a huge variety of different miniatures could be built from this kit due to the fact each model seems to be made from at least 7 parts.

Click a thumbnail to view a close up of each sprue:

You can see that the various components are very well detailed and that there are a number of accessories on the sprues, beer tankards, hands making rude gestures etc, allowing you to make each berserker your own. There are also some very nice details, rings on the fingers, piercings on torsos and scarring on exposed flesh.

Right, time to remove the various parts from the sprue… Ooookay… That was easier said than done. I only have an old pair of clippers on me at the moment, Games Workshop from about 3-4 years ago, the kind with the thick blades. Some of the parts are really tricky to get to using these, one head is only 1-2mm from the frame of the sprue and these clips struggle to get in there. Also one of the pairs of legs, the ones with the runes on the buckle, are attached to the sprue in such a way as to make them tricky to remove. I think this would not be the case with some good thin bladed clippers so if you don’t have any and are thinking of buying this kit it could be time to buy some new ones (Games Workshops new ones are good, as are the Army Painter Clippers).

Another thing that is worth highlighting at this point is that some of the extra details are insanely small, this may be the first time that nose to ear chains and piercing have been rendered individually into plastic. Now I applaud Avatars of War for including these in general but they are quite difficult to work with due to their small size. That said, the piercings are the worst to work with and as they add very little to the model (especially as these are rank and file troops) you may as well just not bother with them.

Next, cleaning up, I’m a little fanatical about removing mould lines, and other casting defects but I found these models to be pretty clean out of the box, some small areas didn’t even need mould lines removed at all (a very rare occurence in my experience). There was only one significant issue and that was one of the pairs of legs consistently seemed to be cast mis-aligned, this wasn’t too much of an is sue though as this pair of legs had trousers on, so it was just a matter of cutting way some of the plastic to make the fabric folds look natural.

OK, I’ve got a selection of cleaned up parts now, time to stick these things together. As these models comprise of at least 7 parts there are a huge variety of ways to build these guys and there is a near infinite range of poses that can be built using this kit. Your unit of berserkers (or Slayers in Warhammer) will not have a single model that looks the same as another. Stand out features are the seperate hands/axes, allowing individual positioning of the wrist joint and optional/switchable mohicans.  Top marks!

However… There was one part that looked great at first glance but didn’t quite work out, this was the 2-part hand that holds the haft of the double handed axe. Before I tried building the model, I thought “This is great, I can adjust the position of the hand on the haft meaning I can position the arms any way I like!!!” (yes that was 3 exclamation marks – I thought it was that great!). Sadly when you come to build the model you are so limited by having to get clearance from the models beard that there really is little variety that can be achieved.

My final comment on sculpt/design is that the banner in the pre-order special edition box is far too elaborate for my tastes and I toned the one I built down. If you build it as shown on the back of the box it would be about 4 bases wide… It is also a little flimsy as the banner pole comes in two parts, simply glued end on end, this will break apart for everyone at some point, no matter how careful you are.

I have just two more issues, both concerning the bases. For one they are slotted and the models don’t need slotted bases, meaning they will need to be filled, an un-necessary effort. Also, once I went to use the miniatures in a game I spotted the bases were lightly bigger than the normal 20mm Warhammer Dwarf base. I wanted to use one of my existing dwarf movement trays, as it configured the way I wanted, and the berserkers (or Slayers as I was playing Warhammer after all) wouldn’t fit in the tray, the bases are just under 1mm bigger which makes a big enough difference to cause a problem on a 7 wide frontage. Basically, you may wish to re-base on Warhammer bases.

With regard to  price these miniatures perform very well, £22 per box, that’s £1.10 per model, including full command. That is cheaper than Games Workshops Dwarf Warriors, less detailed, 3-4 pieces models that come in at £1.25 each, obviously Games Workshop Slayers are much more expensive as they are metal so a comparison would be unfair but the Avatars of War models obviously allows you to field a large squad of slayers for a fraction of the price.

Finally, a lot of people will be planning to use these Dwarf Berserkers as Warhammer Troll Slayers or Giant Slayers but do they look the part? Are they the right scale?. Well stylistically they are just about spot on, they have that warhammer look, as does most of the Avatars of War range. Scale-wise they are maybe 1mm taller, unhelmeted they are only slightly shorter than a Warhammer dwarf wearing a ridged helmet, see pic. Most of this height seems to come from the legs, see middle line in the picture, the waist line on the Berserker is almost chest hight on the Warhammer Dwarf Warrior. Personally I don’t find this to be too much of an issue as most Warhammer Dwarfs wear mail skirts, so you can’t see their legs and the difference isn’t immediately apparent.

The Avatars of War Dwarf Berserker Regiment box contains some great looking models with excellent detail and can be built in a huge variety of different ways.

There are some issues that make building them a little tricky. Cutting some of the parts away from the sprue is a little challenging and some parts are very small.

Another issue is that the bases supplied are a different size to Warhammer bases, not an issue if you are not playing Warhammer but if you are it might well mean you need to purchase extra bases.

These small issues don’t detract from the over all quality of the models and at just £1.10 each they represent fantastic value for money.

So the Avatars of War Dwarf Berserker Regiment scores…

Addition on request of Draco

Here is an image of the Avatars of War Berserker next to a Mantic & Warhammer Dwarf.

The various horizontal lines are set at the level of the Avatars of War Dwarf.