Grey Knight Terminators (GKT’s) are a mainstay of Grey Knights forces, they’re able to teleport straight into the thick of the action, or fire their heavy weapons whilst relentlessly moving forwards from their own lines. Whilst other Space Marine chapters may have a few score suits in total, the Grey Knights pretty much have a suit for every battle-brother, a privilege granted to them due to the dire threats they must face on a daily basis. This review concerns itself with the new plastic GKT kit released by Games Workshop, which allows you to build up to five Terminators or Paladins, including a Justicar or Apothecary.

One of the main benefits when an old army is remade is that the models get redesigned and remade in plastic; certainly, the Dark Eldar release benefited hugely from a complete redesign. But when the Grey Knights were announced, with new plastic kits to replace the metal sculpts, there was a good amount of trepidation amongst players. Most people liked the old models, and didn’t want to see them become invalidated either due to a completely new design for the models, or due to scale creep (the tendency for new releases to gradually get taller than older models over a number of years).

Happily, in this case the old and the new sit together very well, the style has been retained and they are at the same scale. That doesn’t mean that the plastic miniatures are basically the metals done in plastic; there are a number of subtle differences between the models.

The plastics have a hood-type affair now, but hopefully this doesn’t mean that they’ve now taken to hanging out over the balcony at your local shopping centre. The detailing on the armour plates has also been updated: the writing is now more clearly defined and all the edges are much sharper. The sharpness extends to the all the components: the helmets, weapons, and bling have good definition too. 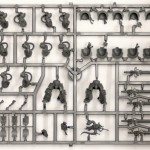 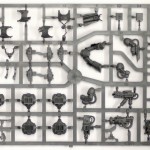 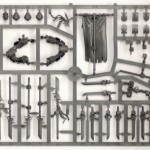 The components are packed closely together on the sprues, and many of the parts are fragile, or fiddly, so unclipping the components is a fairly fraught process. This is another kit where the parts are attached on the parts where you want things presented at their cleanest and smoothest, and this does take a bit of work to clean up. The review kit had a number of mould lines in inconvenient locations – these weren’t the worst examples seen – but it was another thing that needed some attention before the building process could begin.

It proved difficult to get a clean contact between the limbs and torso, real attention was needed to make sure that the parts were touching correctly and the parts needed to be held for longer than expected for a satisfactorily strong join to be established. I don’t usually bother with instructions, but with the number of options in the kit i thought I would have a look. Unfortunately, I think it left me more confused, as the explanations for building each type of miniature were a bit muddled. I think that having a basic diagram showing the core build of the marine, followed by sections showing the alternative builds would have worked better.

These problems are all quite minor though, as for all these quibbles the kit is pretty great. It is possible to make a great range of poses for anything from attacking terminators to a more heroically posed model. There are lots of small extras that you can use to add extra details to your marines. Little really does mean little though, when using the model some forceps would have been useful, as well as a scalpel, someone to wipe my brow and perhaps a full medical team in attendance too. I exaggerate of course, but I was worried about losing some of these smaller parts. There are also multiples of most of the weapons – certainly your bitz box will be fuller when you’ve finished. The notable exception being that there is only one Daemonhammer supplied, so expect to see the business press listing its trade price next to Gold and Platinum.

This kit has been made to a high standard, covers most, if not quite all, of the options you could possibly need, and will provide you with lots of extras for conversions in any other projects you might have (a Nemesis Falchion has already been press-ganged into a becoming a powersword for an Imperial Guard officer). This really is the kit that patient ex-Daemonhunter players have been waiting for (and, dare I say it, deserved), and it scores: