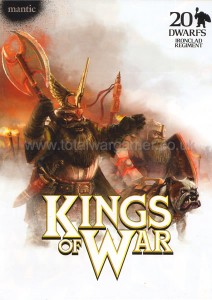 Dwarfs are the third range of miniatures from Mantic Games, and their first release is the Ironclad.

These are essentially classic Dwarf Infantry: heavily armoured; and armed with hammers and axes.

On opening the Ironclad Regiment box the first thing that strikes you is how much you get for your money. Now, Mantic are well known for the value for money represented by their models, but they seem to be hitting new heights here.

There are four models sprues (three regular Ironclad troopers and one command sprue), two sprues of bases & a poster/guide in here, the box is literally crammed packed with dwarfen goodness. Check out the sprues below: 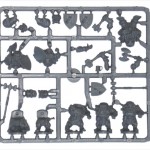 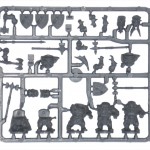 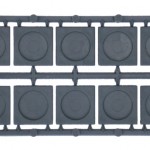 Firstly, as with all Mantic’s plastics, the Dwarf Ironclads are a pleasure to work with due to their simplicity, you can put a unit together in no time, what’s more you don’t feel that the simplicity detracts from the quality of the models.

To expand this, most come in 1 large piece comprising body, head, legs and one arm, these can then be customised with the addition of the a hand weapon & shield or a two-handed weapon. Mantic seem to be using a novel mix of techniques to introduce variety into units, rather than having the same pieces that are interchangeable on all models – some models have head swaps available,  some don’t, some models have swappable arms, other’s don’t and there are some models that come in just two pieces. Whether this mixture makes for more variety while maintaining simplicity I don’t know, but what I do know is that I like this approach.

There are a number of extras on each Ironclad troop sprue, you get a dwarf casualty, a tankard, a dwarf bulldog & an orc’s head (giving us all a preview about what the forthcoming Mantic Orcs will look like).

Onto the command sprue: the champion, banner bearer and musician are all nicely done, especially the banner bearer and champion. The champion in particular has substantially more customisation options than the rank and file, as it should be, making it easy to give each unit’s champion a unique look.

One thing that is slightly lacking though are weapons options. If you want to put together a unit equipped with hand weapons and shields you need to trim down some two-handed hammers to make hand weapons. This isn’t a huge issue but if you wish to equip a unit of 20 dwarfs with two-handed weapons you’d need to buy 2 Ironclad regiments as only 10 two-handed hammers are included. To my mind this is the biggest issue with the Ironclad sprues, it’s not the end of the world but it is slightly annoying.

Apart from this there was only really one other negative with this kit: the shields are slightly tricky to position on the arm. They are cast separate from most of the models, and on the unit that I built for the purpose of this review, I stuck them on so that they lay against the arm of each model, as you would imagine they would be used. This however means that the shield sticks out quite a lot and the unit doesn’t rank up very well. It won’t happen on my next unit (or your first hopefully if you’re reading this) and I can probably prise them off and reattach them at a better angle, once again just slightly annoying.

Anyway, I’m looking at a completed unit of Ironclads now and I have to say I’m impressed they really look the part of a unit of rock hard Dwarf infantry, fully armoured and ready for action…

…and at this point almost everyone out there is wondering if I’m going to mention Warhammer at all in this review, well I am actually, here we go. If you plan to use the Dwarf Ironclads as hammerers or dwarf warriors as part of an exisiting Warhammer dwarf army you are going to have problems, unless you give the unit the sobriquet “Lorin’s Long Shanks” or similar it might be hard to explain why they are a full head taller than every other dwarf on the battlefield.

That said, once Mantic have expanded their dwarfs range so that it is possible to field a full Mantic dwarf army there should be no such problems. As Games Workshops dwarfs are so short, Mantic Dwarfs are still shorter than human sized Games Workshop models and, as you would imagine, they shape up nicely against Mantics elves too,  see pic below:

So far the new Mantic Dwarfs have really impressed me; they look great and are a pleasure to build. There are some small issues with limited weapons options and getting units to rank depending on how you position shields but these don’t detract from the quality of these models.

Finally, as these are from Mantic, they are great value for money each model comes in at just £0.63 each.