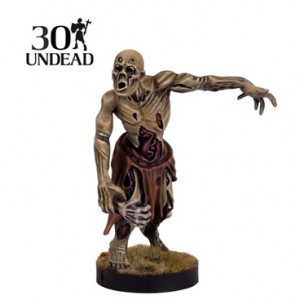 Zombies, the fleshy undead, hideous shambling perversions of nature, the restless… (they know what you are talking about – Ed). OK, well Mantic’s long awaited Zombies finally arrived last week and we’ve been having a bit of a play around with them…

After tearing off the cellophane and opening the box the first thing that hit me was that there is only 1 type of sprue, the Zombie Regiment contains 10 of these sprues and the Horde contains 20.

This was disappointing as each sprue basically contains 3 models (with some extras) and I was hoping for a little more variety.

Anyway, after the initial disappointment, it’s time to get stuck in.

The sprue contains 3 sets of legs & one ground-burster base. 3 torsos are included, one of which has two arms already attached and two that have one arm already attached. The sprue also includes 6 heads, 3 arms and a spinal column. This is a fair number of components for a small sprue, Mantic’s sprues are always about half the size of Games Workshops, and offers a respectable number of build options.  However, as many arms are supplied attached to torsos, pose-ability is limited to some extent and you can’t get away from the fact that you will be using the same torso, with one or more fixed arms, 10 times even with the smaller of the two Zombie boxed sets.

Looking at the sculpts themselves, the level of detail is impressive. The torsos in particular are superbly detailed as are the arms and hands, these are some of the nicest sculpts I’ve seen from Mantic, and are some of the best zombie sculpts I’ve ever seen. The only part of the models that I’m less than keen on is the way that the torsos attach to the legs. The join is pretty obvious and, although basically a ball and socket,  doesn’t allow for much variation in positioning.

One really great thing I spotted whilst building the zombies was  that there is actually scope to get 4 zombies out of each sprue (rather than 3) as long as you are happy to have a large number of “ground-bursters” and guys that have been severed at the spine (see pic below). This is brilliant as the two Mantic Zombie boxed sets already represented great value for money at 3 zombies per sprue. You will of course need extra bases but, as they come in at just £1RRP for 10, this is no problem at all, you can pick up Mantic Bases at Big Orbit Games.

The Mantic Zombies offer a respectable number of build options but suffer from limited pose-ability due to the fact that there are just 3 different torsos with either one or both arms already attached.

That said the sculpts are some of the finest zombie sculpts I’ve seen, definitely head and decaying shoulders above those produced by Games Workshop.

Finally, the Zombies are the best value miniatures Mantic has ever produced, this is quite a statement as Mantic miniatures always represent great value for money.

These Zombies definitely deserve a place in any undead army.