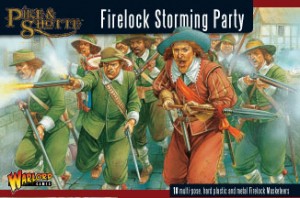 The Firelock Storming Party from Warlord Games is a boxed set containing 18 figures, 16 plastic and 2 metal.  The packaging is well designed, the front illustration and the information on the reverse both being particularly pleasing to the eye.

Inside, there are the metal figures, a running officer and drummer, as well as 16 identical sprues for the rest of the company.  There is also a printed sheet with further information on the period and troop type, as well as some colour scheme suggestions.  Like the box itself, this sheet is also produced to a high standard and shows that a lot of thought went into it’s production, elevating it from being a mere aside.

The two metal figures represent the captain and drummer of the company.  Both these figures are very well detailed and are very evocative of the desperately charging men they represent.  The only downside I can see is that if you plan to field multiple companies then you’ll need extra work converting these figures to minimise their repetition from unit to unit, having said that, they are amongst the best historical figures I’ve ever seen, so I think that down side can be forgiven.

As previously mentioned, the bulk of the company are all made from a single plastic sprue type, meaning that they use the same stock pose: with one leg slightly raised and tilting forward in a running pose.  Unfortunately, this means that there is very little in the way of out-of-the-box variation to be had from this set.  Each sprue contains two sets of firelock-wielding arms (gun raised and gun point forwards), as well as two hats, and that is all the variation that can be had.

This does mean that you are getting 16 spare firelocks, which can be sprinkled about other regiments to denote better equipped individuals (plus of course more hats). It would have been nice to see extra possibilities in the kit; a second pose or separate torso’s and heads being two ways of doing this.

The sole pose aside, the model is finely detailed and has a minimum of mould lines.  And although I spent the last paragraph complaining about the lack of variation in the pose, the fully assembled company does look quite good in a uniform “hustling” into position kind-of-way.  And it is possible to add a minor conversions to change the leg posture, as well as change the elevation of the gun to a certain extent.  With a few spares from other sets, it is also possible to do things like add some hat plumes, for instance, further enhancing the look of the unit.

All in all then, this is quite a pleasing set of figures at a very good price.  Not being able to get multiple poses out of the box is an issue for a lot of modellers and gamers however.  I feel as though Warlord missed a trick here – if there had been say: two torso’s, two heads and two sets of legs per sprue (and thus eight sprues per box) it would have easily rectified this problem.