Welcome back to our weekly Vanguard update! This week sees several new cards confirmed for G-Comic Booster 1: Vanguard and Deletor, while two new cards and the reprints for the new Booster Set (G-B05: The Dragon Fang That Glitters in the Moonlight) have been confirmed. Two new promo cards have been unveiled, while new keywords for Pale Moon, Gear Chronicle, Oracle Think Tank and Narukami have been discovered.

Before we examine the actual cards coming out, it’s worth looking at the keywords. As Harmony and Wave have shown, these look as though they will develop and clarify existing skills in the clans. So far, only the names and vague relations to their effects have been shown, but there is some sensible speculation about the particulars.

Magia: Pale Moon’s new keyword is Magia, which is speculated to be shorthand for placing a unit into the Soul, then calling a different unit out of the Soul. This keyword will be revealed in the upcoming Pale Moon trial deck, which also features reprints of Poison Juggler and Egg Juggler.

Time Leap: Gear Chronicle gain this keyword, which is speculated to be shorthand for changing the Grade of your own rear-guards, such as in the effects of Upstream Dragon; Interdimensional Dragon, Epoch-Maker Dragon; or Interdimensional Dragon, Faterider Dragon. Some think that this might refer to placing your opponent’s units on the bottom of the deck, but ‘leaping’ implies a positive action, making it likely that this is about upgrading units. This will be revealed in the upcoming new Gear Chronicle trial deck, which features a reprint of Chronojet Dragon.

Oracle: This is the Oracle Think Tank keyword, showing effects which activate when the user has five or more cards in hand.

Thunder Strike (x): Narukami’s new keyword shows effects which activate when the opponent has x amount of cards in their Bind Zone, implying that the Narukami released in G-BT05 will focus on retiring units to the Bind Zone, as opposed to the Drop Zone. 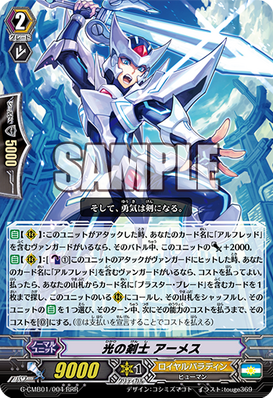 Four more of G Comic Booster’s Royal Paladins have been revealed, all of whom revolve around having a Vanguard with ‘Alfred’ in the name. As seen before on Swordsman of Light, Blaster Rapier Lola, this seems intended to be King of Knights, Alfred, who will almost certainly see a reprint in this set. Swordsman of Light, Ahmes (pictured) is Blaster Blade before he was granted his famous sword. When he attacks and you have an ‘Alfred’ Vanguard, he gains 2000 power; then, when he hits a Vanguard, you may Counter Blast 1 to Superior Call a card with ‘Blaster Blade‘ in its name from the deck over this card and make the cost for its effect 0. This is a really nice skill – it allows for one extra attack, a cheaper retire and, lore-wise, reflects his progression into Blaster Blade. Swordsman of Light, Blaster Axe Guerard is a  9000 power Grade 2 with a very useful ability.  Once per turn, when another unit is called as a rear-guard by an effect while you have an ‘Alfred’ Vanguard, it gains 5000 power, easily allowing it to form a 21000 column with a 7000 power booster. Swordsman of Light, Blaster Javelin Larousse seems to imply further ‘-gal’ support. He is a 9000 power Grade 2 with the ability to put two cards from your hand into the soul to call two <High Beast> units from your deck. The new set will likely feature good <High Beast> boosters, but, as Larousse does not specify grades, any Royal Paladin <High Beast> can be used. This allows units from the hand to be traded for more useful ones from the deck for free, but generates no inherent advantage. 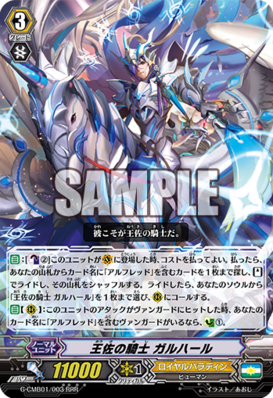 Knight of King’s Lieutenant, Galehalt (pictured) is designed to be the back-up Grade 3 for the new ‘Alfred’ decks. When he is placed on the vanguard circle, you may Counter Blast 2 to search your deck for up to one card with ‘Alfred’ its name and Ride it, then you can Call Galehalt from your soul as a rear-guard. Further, when his attack hits a vanguard and you have an ‘Alfred’ vanguard, you may Counter Charge 1. His first skill seems costly, but is not actually overpriced. Calling a single rear-guard is usually considered to be worth Counter Blast 1, so the other pays for ensuring you get the vanguard you need, with the cost further mitigated by his second skill. Galehalt looks set, therefore, to be a great unit for G Comic Booster Royal Paladins, and will see play in many decks. This set also sees Rain Elemental, Madew reprinted as a single R, certainly to benefit the 10000 power King of Knights, Alfred. 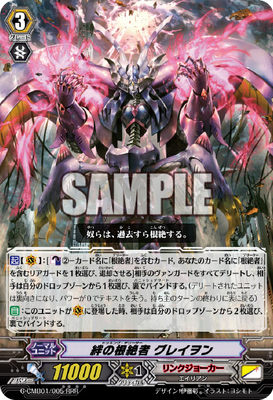 Docking Deletor, Greion also has been revealed from the G-Comic Booster, with a powerful new ability. When Greion is placed on the vanguard circle, your opponent chooses two cards from their Drop Zone and ‘Banish Deletes’ them. This seems to refer to binding them face-down permanently, preventing them from being used. However, it is his active effect which is best – by Counter Blasting 2 Deletors and retiring a Deletor, you can Delete your opponent’s vanguards and ‘Banish Delete’ a card of your opponent’s choice from their Drop Zone. This makes him strong against Legion decks, Granblue and other clans with the ability to return cards from the Drop Zone to the deck, such as Neo Nectar, Genesis, and Great Nature. An interesting pair of Grade 2 units have also been revealed in Hailing Deletor, Alba and Hailing Deletor, Elro. These units rely on being in the right and left columns respectively, which is visually depicted by each only having that one arm. Alba is an 8000 power unit which, when it is placed on rear-guard and your opponent’s vanguard is deleted, you can search your deck for a ‘Hailing Deletor, Elro’, call it to a rear-guard and shuffle your deck. Then, your opponent calls the top card of their deck to a rear-guard circle. This enables the effect of Elro, as, when an opponent’s unit is placed on a rear-guard by a card effect, you can Counter Charge 1 and force your opponent to Banish Delete a card from their Drop Zone. This can easily help to ensure multiple Deletes from your vanguard. Further, both units gain 3000 power when they attack a vanguard, provided both they and their counterpart are in the correct columns. The old forerunner, Acquire Deletor, Igor, also helps Greion a lot with his easy Counter Charge, alongside Alba. 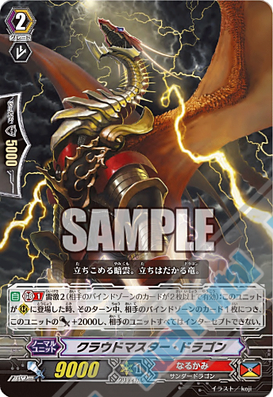 Cloudmaster Dragon is one of the first two units to be revealed from G-BT05: The Dragon Fang That Glitters in the Moonlight. At Generation Break 1 and Thunder Strike 2, when it is placed on a rear-guard circle, it gains 2000 power for each unit in your opponent’s bind zone and prevents all their units from intercepting. This is a really strong ability, but fortunately can only be used once without replacing the copy. This encourages Narukami to use this for a turn of powerful attacks, rather than constantly shutting down intercepts. Rigid Crane is the second card to have been revealed from the future set, and is an Oracle Think Tank Grade 2 with 9000 base power. At Generation Break 1 and Oracle, it gains 2000 power during your turn and Soul Charge 1 and Counter Charge 1 on hit. Both of these cards can only be used after Striding and under certain conditions, which limits their powerful effects somewhat. In other news about G-BT05, promotional material has been released which seems to depict upcoming  Magus, Star-Vader, Messiah and Nightmare Doll cards, while also showing reprints of two promotional cards in Lady Battler of the White Dwarf and Battle Sister, Taffy. 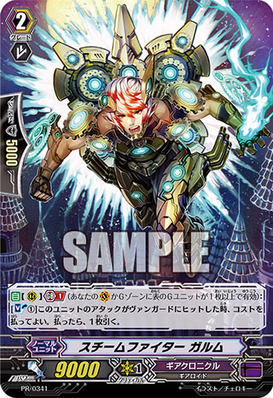 Finally, two new Promo cards have been revealed. Geisharaizer is a normal draw trigger for Nova Grapplers. Steam Fighter, Galm (pictured), meanwhile, appears to be a prize for participation in Bushiroad’s 2015 World Grand Prix. He is a 9000 power Grade 2 for Gear Chronicle, with the Generation Break 1 ability to draw a card when its attack hits a vanguard for the cost of one Soul Blast. This is cheap for drawing a card, but competes for a very limited resource in Gear Chronicle, who only have access to two or three Soul in a game. As such, players might prefer to continue using the Soul for cards such as Steam Fighter, Mesh-he, as their effects are far more reliable.