Welcome once again to the weekly Vanguard update! All the cards for G-CB02 have finally been revealed! Cards have also been shown from the next booster set, G-BT05, and the ace Grade 3 for G-TD07. 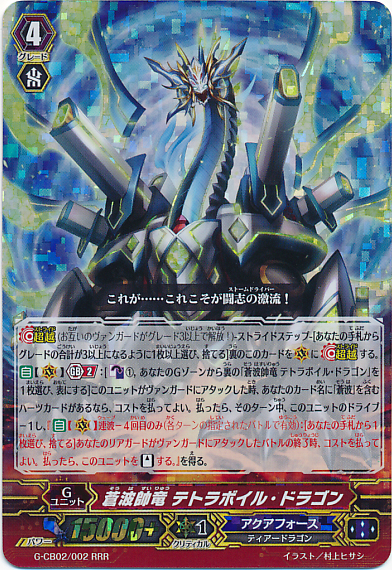 I think it’s only right to start with the last lot of Aqua Force and with a big splash! The G unit that everyone has wanted to see, Blue Wave Marshal Dragon, Tetra-boil Dragon,  is just as good as people imagined. When you attack you may Counter Blast 1 and G Persona Blast to -1 your drive check, then when one of your units attacks an opponent’s Vanguard on the forth turn you may drop a card to stand your Vanguard back up! Combine this card with Blue Wave Dragon, Anger-boil Dragon (Allowing you to stand 2 rear-guards and give the +3k on the second battle) makes for good, powerful combos as well as making the re-stand very consistent. You can’t have this kind of power with just any build though, you must have a heart card with “Blue Wave” in it’s name. This only leaves Blue Wave Dragon, Anger-boil Dragon and Blue Wave Dragon, Tetra-drive Dragon, but seeing as they are both very powerful units I don’t think many people will mind having to use them. This card may have been made due to the fact that he will be Leon’s new stride in the anime which gives a lot of hope for the cards that will be used by Miwa, Kai, Naoki, Aichi, and maybe even Emi in future G episodes. 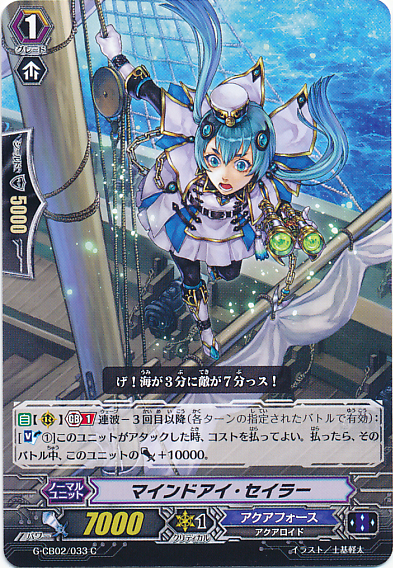 A clone of High Tide Sniper has been revealed as a Grade 1 counterpart. Mind Eye Sailor allows for a strong front row without Grade 2s or 3s. With the Soul Blast 1 giving her +10k power she gets to a handsome 17000 power without support. This is a great card to target with Storm Dominator, Commander Thavas‘s +5000 power skill, making her 22k power and being able to attack from the back row. Blue Wave Soldier, Brutal Trooper is a new critical trigger and a great addition to the beloved Blue Waves. By putting him on the top of the deck and shuffling you can give a rear-guard the ability to draw a card if it attacks a Vanguard on the second battle or more, so long as you have a “Blue Wave” Vanguard. This along with both Anger-boil Dragon’s skills and Blue Wave Marine General, Foivos can fill up your hand nicely and makes Tetra-boil’s -1 drive check more bearable. More triggers for Blue Storm will also be available with this new set. These triggers are Sea Otter Soldier of the Blue Storm Fleet (Draw trigger), Medical Officer of the Blue Storm Fleet (Heal trigger), and finally Blue Storm Battleship, “Poseidon” (Critical trigger). All these Blue Storm triggers don’t have any abilities but it’s always nice to see more triggers for subclans. 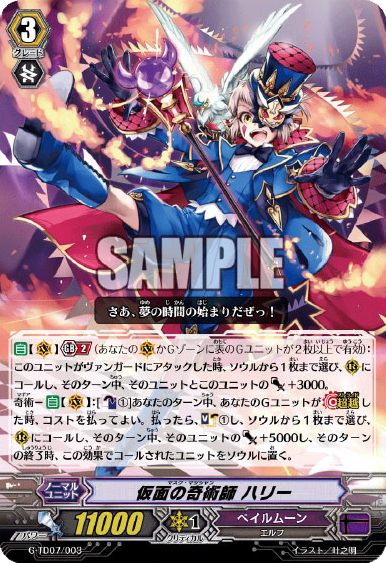 Following these excellent cards we will move on to the main event with the new Pale Moon units! Many people have been curious about a certain masked boy who has been shrouded in the mysterious depths of G-TD07 and now it’s time for him to show his true identity. Masked Magician, Harri, the new G era Grade 3 Pale Moon ace and the avatar of Luna Yumizuki, is just as playful with the soul as you’d expect from a Grade 3 from the Pale Moon circus. When you stride on top of him you can Counter Blast 1 to give him the newly named “Magia” effect to Soul Charge 1, choose one card from your soul and call it to a rear-guard circle with a suped-up +5k to it’s original power but at the end of that turn you must put the newly called unit back into your soul. This does have it’s benefits. By putting things back into the soul your opponent may get the same problem they would have against a clan like Murakumo, and that is they may need you to have rear-guards to use their skills properly but now they won’t have anything to retire, keeping all your important units huddled up safely in Harri’s (Rather large) soul. As a player of Megacolony and SP Witches I can tell you from personal experience, through fights with a certain Tom’s (Who also writes on this blog) Murakumo deck, just how frustrating this can be. Oh and of course Harri’s skills don’t stop there. With a Generation Break 2, when he attacks, you may choose one card from your soul and call it to a rear-guard circle with +3000 power. Unlike the previous skill, this unit stays on the field so you have options whether you want to maintain a big field or switch everything around each turn. This also allows you to change up your strategy depending on what deck you’re up against.

Silver Thorns come back in G-BT05 with the new Grade 2, Silver Thorn Magician, Clemens. Clemens specifically works with the lovely Luquier. If you have a Luquier Vanguard, Clemens gets +2k power and if her attack hits you can put her into the soul to call out a unit with a different name. This seems to be an improved version of the old Mirror Demon from BT03 but with the “Luquier” requirement. I feel like this card helps the Silver Thorns a lot, especially if she was going back into the soul anyway due to another of your units abilities. Looking at Clemens’s lore I think a lot of people will be happy to know that Silver Thorn are still keeping up their assassination business which makes them fit to be part of the demon-filled Dark Zone. 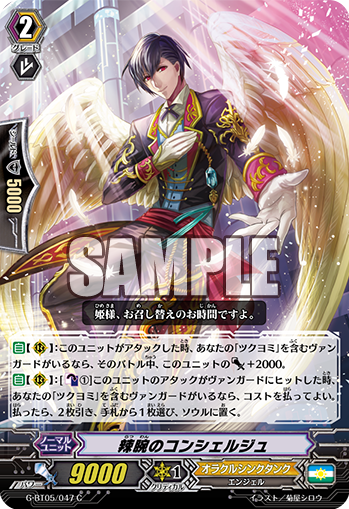 Another 11k Grade 2 working for an adored Vanguard maiden has appeared in G-BT05, this time for Tsukuyomi. As well as the +2k power, Shrewdness Concierge has the ability to Counter Blast 1 when his attack hits to draw two cards and put a card from the hand into the soul. Tsukuyomi has been extremely lucky with her support for fixing up the soul, I’m sure many people who hold on to their non-Tsukuyomi ride chains are very jealous but don’t take it out on the poor girl. Being able to use this card early on in the game really fixes most problems with ride chains and seeing as we have already been shown Handedly Housekeeper I believe this is the last we will be seeing of Tsukuyomi of this set unless she gets a new Grade 3 (Maybe even a break ride! But I doubt it sadly).

Now, big muscular dragons are nice and everything, but sometimes you gotta take things back in time a little, back to Narukami’s first subclan! Yes the Eradicators are back in action! So far we have only had two revealed to us but there is believed to be a few more in the future. For now though we have a Grade 2 by the name of Fiendish Sword Eradicator, Cho-Jun. People will remember the Fiendish Sword Eradicator, Cho-Ou helping out Eradicators a lot in the past and hopefully Cho-Jun can do the same. When Cho-Jun hits a Vanguard you can Counter Blast 1 “Eradicator” to retire one of your opponent’s rear-guards. So unlike Cho-Ou, Cho-Jun can carry on his onslaught of retiring. This also helps a lot for some good ol’ Steve the Destroyer (A.k.a “Eradicator, Sweep Command Dragon“) action! With Cho-Jun and Eradicator, First Thunder Dracokid you will easily be able to superior ride Steve the Barbarian part way through the turn.

The fun doesn’t stop with Steve the Butcher though, a young man from the same tribe as the famous Steel-blooded Eradicator, Shuki has shown up. The Grade 1 Machine Gun Eradicator, Kanto gives 2k power to himself and an ally if you Soul Blast 1 Eradicator when an enemy unit has been retired. This gives a similar effect to Knight of Reform, Pir, and by that I mean… high numbers everywhere! Some people may still prefer Dragon Dancer, Agatha but I feel that Kanto is far more flexible by being able to make any column gain the other 2k power allowing you to get all the front row units to give your opponent as much pressure as possible.

This concludes this weeks update! G-BT05 is looking like a very promising set and hopefully next week we’ll get to see more of the trial decks too. I would definitely like to see what all this “Time Leap” business is about. Thank you for joining us this week and don’t forget to join us again next week for the cards revealed in the next seven days.