Welcome once again to the weekly Vanguard update! We can all now take a break from the relentless spoils for Aqua Force and finally focus on the upcoming booster and trial decks. Multiple cards have been shown for Gear Chronicle, Link Joker, Narukami, and Pale Moon. 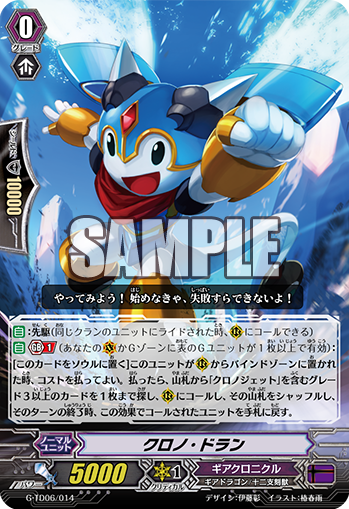 You may remember this little fella from an older update. Chrono Dran has been revealed to be in the next trial deck and not only had his skill shown but also the fact that he has two races (Gear Dragon and Zodiac Time Beast), though it is not yet clear if having two races will have any significance to the actual game. With a Generation Break 1, when Chrono Dran is put into the bind zone from a rear-guard circle you may instead put him into your soul to superior call a Grade 3 with “Chronojet” in it’s name from your deck. Then at the end of your turn you put the newly called unit into your hand. This allows for a strong column and something to ride or stride with next turn.

You may be wondering “If I’m not against Nubatama then how am I going to get Chrono Dran into the bind zone from rear-guard?” Well there’s no need to worry about that! Introducing the new Time Leap ability! We were first graced with the knowledge of this ability through the new stride unit from the next trial deck, Interdimensional Beast, Metallica Phoenix. By having a “Chronojet” heart and a G Persona Blast, the Time Leap comes into action. You may choose one of your rear-guards and put it into the bind zone. If you do, search your deck for a unit with a Grade that is greater than the unit you bound by one and call it to a rear-guard circle. At the end of the turn you must put the new unit to the bottom of your deck and call the bound unit back onto a rear-guard circle. This will work great for all sorts of on-call abilities and will allow for more cards to have on-bind abilities like Chrono Dran’s. 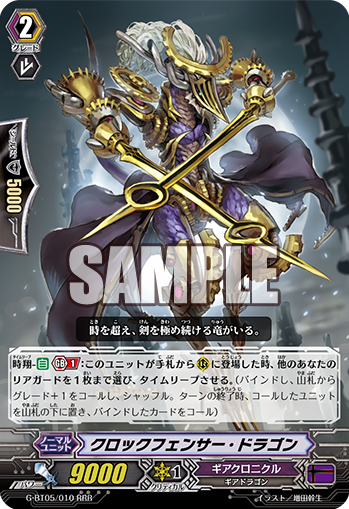 Speaking of on-call abilities, today Clock Fencer Dragon was revealed for G-BT05. He is the first Grade 2 RRR we’ve had in a main booster for quite some time and shares the Time Leap ability that Metallica Phoenix has. He has no cost for his ability but it will only take effect if you have Generation Break 1.  He is called from hand, so you can’t make uber Time Leap combos for now. Unlike Metallica Phoenix, Clock Fencer isn’t “Chronojet” specific, so if you’re someone who uses Gear Chronicle but not Chronojet, you can still pull off Time Leap.

There is also a Grade 1 version of Clock Fencer Dragon that comes in the new trial deck called Timebreak Dragon. These two cards also help with Steam Maiden, Melian-Na who also comes in the trial deck. She’s a 9k Grade 2 that, with a Generation Break 1 and when placed on the field, gains 4k power. With a 8k Grade 1 behind her, she can get up to 21k power which is nothing to sniff at. With the help of Time Leap you will be able to easily bring her out many times in a game and have her gain the extra power.

Another unit that benefits from Time Leap is the promo Steam Maiden, Lacina-Ber. When she is put into the bind zone from a rear-guard circle, you can put one of your opponent’s units at the bottom of their deck. This is great seeing as the ability itself costs nothing! Hopefully we can see this promo come in English very soon.

I’m glad to see Gear Chronicle getting Time Leap – to me it finally makes them unique. Before now I saw them as being very similar to Kagero, but I feel like they have now made their own place in the game, and I’m always happy to see more use of the bind zone. 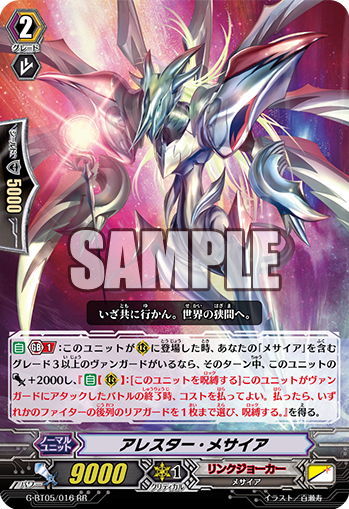 Excelics isn’t the only new Messiah on the block! We also get a new Grade 2 Messiah, Arrestor Messiah. When Arrestor is placed on a rear-guard circle, while you have a Generation Break 1, she gains +2k power and the ability to lock herself when she attacks to then lock a back-row unit on either yours or your opponent’s side of the field. This can really help Excelics to power up your whole field or retiring your opponents units by unlocking them. Another good choice would be to just leave your opponent’s rear-guards locked to limit their actions in the next turn, though if they have a small amount of cards in hand then retiring them can be equally as bad for them.

Lady Battler of the White Dwarf is getting a reprint in G-BT05 and will be able to unlock Arrestor for even more attacks. This card helps the new Messiah build a lot and can be used well with units like Neon Messiah and Awaking Messiah. If she unlocks a unit she becomes an 11k booster, so she could also boost Arrestor for an easy 22k column. 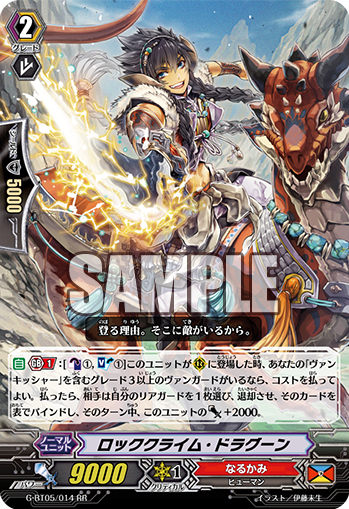 Dragonic Vanquisher has received some more support in this next set in the form of a Grade 1 and 2, both with a Generation Break 1. The first one I will talk about is the Grade 2, Rock Climb Dragoon. Rock Climb is a Glimmer Breath clone – when he’s placed on a rear-guard circle and you have a Vanguard with “Vanquisher” in its name, you may Counter Blast and Soul Blast 1 to have your opponent choose one of their rear-guards then retire and then bind that unit, after which Rock Climb will gain 2000 power. This card will definitely help with the Thunder Strike keyword to fill up the bind zone and if you’re using Rising Phoenix then this card will make up for lost power, though they may be fighting over who gets the soul.

The Grade 1 Vanquisher support, Chain Bolt Dragoon,  works really well with Rock Climb. Chain Bolt’s ability takes effect when one of your opponent’s rear-guards is retired due to the effect of one of your cards and if you have a “Vanquisher” Vanguard, once that’s happened your opponent must bind a card from their drop zone and you can choose one of your other rear-guards and give them +2k power. This only takes effect once per turn, but still, poor Granblue… Hopefully we will see Granblue get some bind zone abilities to make up for this abuse they have been given. 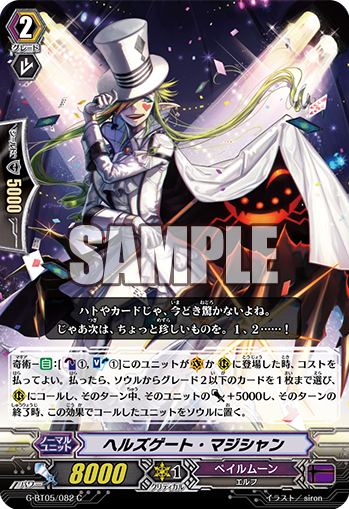 Lastly we get some more Pale Moon units from G-BT05. Hell’s Gate Magician is Pale Moon’s Starlight Violinist clone. When he is placed on Vanguard circle or rear-guard circle you can Counter Blast and Soul Blast 1 to choose a Grade 2 or less from your soul, move it to a rear-guard circle and give it +5k power. This is Magia so at the end of the turn you must put that unit back into your soul. This unit is a Grade 2 with only 8000 power but due to the lack of Generation Break, you can use him early on in the game and use him on the Vanguard circle. Being a Magia, you can get him on the rear-guard circle using cards like Moonlight Melody Tamer, Betty.

To bolster Hell’s Gate Magician’s power Fire Ring Wyvern is an 6k Grade 1 that can boost a Magia unit for 11k power, putting Hell’s Gate at 19000 power! This can also get Harri to 22k power and if they make a Magia 11k attacker or 12k attacker then you’re still going in for over 20k. Fire Ring Wyvern can easily allow for Pale Moon to gain some very strong columns. Fire Ring Wyvern also doesn’t have Generation Break, allowing you to hit your opponents hard and fast.

This concludes this weeks update! Although I do enjoy Clan Boosters I do prefer to see a nice mix of clans, and look! No United Sanctuary! You’ve changed, Bushiroad. Joking aside I do actually hope we see some United Sanctuary next week so we can get a good glimpse of the Magus cards. We should see some in this weeks episode so the chances are good that we’ll get some good skills spoiled. Thank you for joining us this week and don’t forget to join us again next week for the cards revealed in the next seven days.