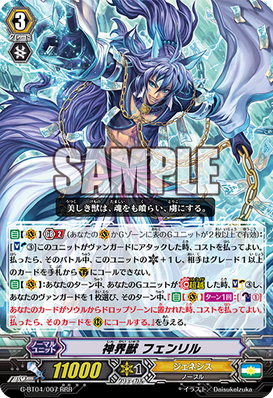 Genesis see some fantastic new G-Era support with Mythic Beast, Fenrir (pictured)! He is the new vanguard for dedicated Stride decks, and his effects are really strong. When your G-Unit Strides, you Soul Charge 3 and give your vanguard the ability to Counter Blast 1 to call units put into the Drop Zone from the soul. This essentially turns any unit into a Chamomile or Melissa while also helping to set up the soul for future turns. However, it is his Generation Break 2 ability which will excite Genesis players most. For a Soul Blast of 3, when Fenrir attacks a vanguard, he gains a critical and your opponent cannot call Grade 1 or greater units from hand to the Guardian Circle. This is very similar to CEO Yggdrasil’s ability, although the cost is half hers but it is also slightly slower with the Generation Break. However, given that he will not be attacking in Legion and so will have a lower power, the opponent will be more likely to be able to guard with their Grade 0 units – he therefore trades some power for the ability to use his effect more often. Divine World Beast, Skoll provides the standard Grade 1 Strider for Genesis, allowing Fenrir to be consistently searched. Fenrir should be a extremely consistent boss, and a welcome alternative to Regalia builds. 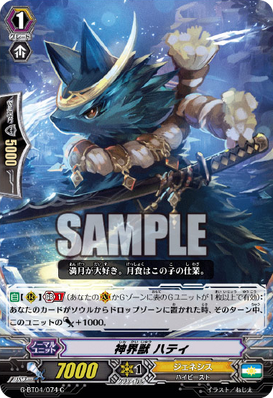 Divine World Beast, Hati (pictured) synergises very well with Fenrir, but will be valuable in many different builds. At Generation Break 1, he gains 1000 power whenever a card is put from the Soul into the Drop Zone. Boosting Fenrir creates a nice 21k column which cannot be Perfect Guarded, but the best combo is using him to boost CEO Yggdrasil. He becomes a 13k booster in this situation, allowing Yggdrasil to attack for 36000 with two damage even before triggers. This is a devastating combination, and will be a solid win-condition for Genesis. Goddess of Decline, Hel gives Genesis their un-flipping Perfect Guard, while Flying Kelly gives them a strong Soul-Charger. At Generation Break 1, she can Counter Blast 1 to Soul Charge 3, and then if a copy of her is in the Soul, you draw a card and Counter-Charge. This is a strong ability, but she is somewhat let down by her 8000 power. In an Yggdrasil deck, however, if she is boosted by Hati, she can form a strong 21000 power column. 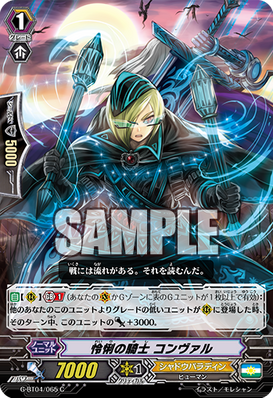 Shadow Paladins receive a couple of units with very similar skills in Cleverness Knight, Convalle (pictured) and Sturdy Knight, Grosne. These are a Grade 1 7000 power unit and a Grade 2 9000 power unit respectively, both with a Generation Break 1 ability to gain 3000 power when another of your units with a Grade less than them is placed on a Rear-Guard circle. These work nicely in Claret Sword Dragon decks, as using his on-Stride ability to call a Promising Knight, David can easily give them the power. However, simply normal Calling units can power these two up, granting a column formed with both of them 6000 power each time! As their art suggests (they each appear in the background of the other’s card), they work very well as a team, and are a great addition to Shadow Paladin decks. Claret Sword Dragon now gains a dedicated Critical trigger in Taboo Demonic Mage, Kafir. When your vanguard attacks (and it is called ‘Claret Sword Dragon’), you may put it into the Soul from a rear-guard circle, draw a card, and give your vanguard 5000 power. This is nicely flexible, replacing itself and granting a power boost, and will be well worth using in Claret Sword Dragon decks. 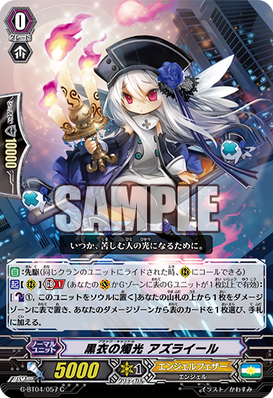 Angel Feather receive a new Forerunner in Black Candle, Azrael. At Generation Break 1, she can Counter Blast 1, move into the Soul and put the top card of your deck face-up into the Damage Zone, then choose a face up card from the Damage Zone and add it to your hand. This is really good for the deck, allowing units like Thousand Ray Pegasus to power up, while also allowing the user to tutor a card they need. They also receive Dream Light Unicorn, an 8000 power Grade 2 with the ability to heal. For Counter Blast 1, when it is placed on a rear-guard circle, you can choose a face up card in your damage zone and heal it, but when it leaves the field, you must look at the top two cards of your deck, choose one of them, and put it face-up into the Damage Zone. This second effect can cause you to lose the game, and it does not activate trigger effects. Dream Light Unicorn does have Resist, which makes it significantly less risky to use, but it can still be attacked while also being unable to be used to intercept without taking the damage again. Essentially, the heal involves you paying a Counter Blast and losing a rear-guard circle, making the usefulness of this card somewhat debatable. 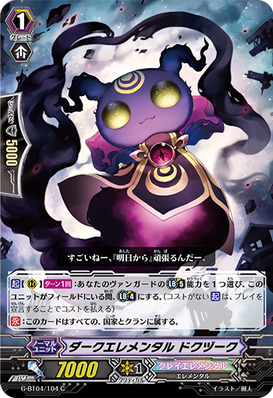 Dark Elemental, Dozudark (pictured) further develops the theme of Cray Elementals aiding older decks. As an active ability, Dozudark can turn your Vanguard’s Limit Break 5 into a Limit Break 4, which in turn can be removed by Limit Break 4 enablers. This is great for older bosses like Star-Vader, Omega Glendios or Blue Storm Supreme Dragon, Glory Maelstrom, allowing them to use their signature abilities even early in the game. The one side effect is that you do need a combination of two specific rear-guards to enable their effects, so it is not always entirely reliable. In other news, Gear Chronicle receive a great Grade 3 backup for Chronojet Dragon in Steam Fighter, Balif. As an active ability on the vanguard circle, it can pay Counter Blast 1 to search the deck for up to one card named ‘Chronojet Dragon’ and put it in Heart state, then return itself from Heart state to the bottom of the deck. This allows Chronojet Dragon to be ridden even more consistently, while recycling a Grade 3 to use for Stride. However, it also has a good rear-guard effect: at Generation Break 1, when it hits a vanguard, you may pay Counter Blast 1 to choose an opponent’s rear-guard in the front row and place it on the bottom of the deck. This will not always go off, but can be useful, and so Balif looks to be a flexible back-up Grade 3 for Gear Chronicle decks. Finally, Knight of Reform, Pier is a Grade 1 for Royal Paladin Altmile decks. At a base of 7000 power, his Generation Break 1 ability is to give two units in his own column 2000 power when a Grade 2 unit is called to a rear-guard circle. This means he can effectively serve as an 11k booster, and synergises well with the G-era Royal Paladin’s reliance on Grade 2 units. Again, his skill can be used multiple times in the same turn and works even with Normal Calls, meaning his skill is very reliable. Royal Paladin decks will certainly benefit from the power which he can provide!