Welcome back to our weekly Vanguard update! This week sees almost all of Soul Strike Against the Supreme revealed, as well as some cards from the new Aqua Force Clan Booster – Commander of the Consecutive Wave. 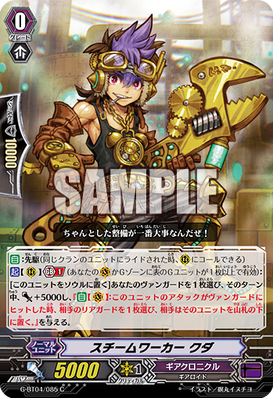 Gear Chronicle receive three new cards this week, including a new Forerunner in Steam Worker, Kuda. At Generation Break 1, he can move into the Soul to grant your vanguard 5000 power and the ability to return an opponent’s unit to the bottom of the deck on-hit. This effect can be really good if used at the right time, but suffers greatly from needing to hit. As such, it is most useful when combined with the Generation Break 2 ability of Chronojet Dragon, easily making it hit 21000 power whilst not being able to be blocked by Grade 1 units. However, most players will still prefer to use Brass-Winged Gear Hawk for its consistent power boost, rather than risk losing a card to no avail. The second card revealed is a simple Critical trigger in Steam Fighter, Rugal-Banda, which will give players more options in their trigger line-up. However, the most exciting card for Gear Chronicle users is Chronodragon Nextage! This is the ‘evolved’ form of Chronojet Dragon, and has the potential to be a really strong finisher. It is a G-Unit with a Generation Break 2 ability with a hefty cost. By Counter Blasting 1, G-Persona Blasting 1 and discarding three cards at the end of the battle where it attacked the vanguard, Chronodragon Nextage can return to the G-Zone and stand your vanguard if it is called Chronojet Dragon. This allows you to make five Drive Checks a turn, while also following up with an attack which cannot be nullified. However, as this is not a true re-standing Vanguard, any trigger effects given to the Vanguard do not carry over to the second attack, meaning that this unit is strongest with a powerful rear-guard column to which to donate its triggers. This is a really strong unit for an already strong clan, so expect to see this in high demand. 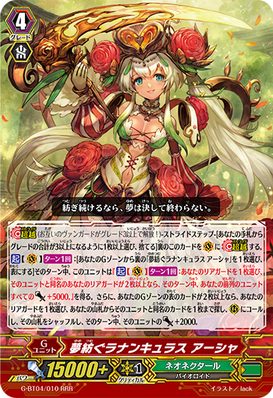 Neo Nectar have also had their next-generation boss revealed in Dream-weaving Ranunculus, Ahsha. Her effect is a little complicated, as it is an ACT ability which gives her an ACT ability. At the cheap cost of a G-Persona Blast, her first ACT unlocks her second ability and then, if you have two or more face-up cards in your G-Zone, allows her to clone a unit and give it 2000 power. Her second ACT allows her to choose a rear-guard, then if you have two or more units with the same name as that unit, to grant the entire front row 5000 power. This does not require Ranunculus Flower Maiden, Ahsha as the heart, but works exceptionally well with an Ahsha heart, essentially cloning two units and granting both of them 2000 power. Dream-weaving Ranunculus, Ahsha might not have the flashiest ability, but she is both strong and reliable and so will certainly be a staple. A good target for cloning in this way would be the new 3 Apple Sisters. They are a 6000 power Grade 1 unit who can grant the unit they boost an extra 2000 power for each other copy of themselves. This means that they can become a 12000 booster when combined with the skill of the Ranunculi units, allowing them to form 21000 power columns with most grade 2s. When combined with Dream-Weaving Ranunculus, Ahsha’s second ACT, this means that Neo Nectar can create two 26000 power rear-guard columns, even without triggers. Their final unit this week is the Grade 3 Crystal Wing Dragon. When she is placed on the vanguard circle, you may Counter Blast 1 and Soul Blast 1 to clone a Grade 2 or less rear-guard. Her Generation Break 1 active ability is to Counter Blast 1 and choose one rear-guard, then to give up to four units with the same name as that unit 3000 power. This can give a total of 12000 power across the board, ideally granting both rear-guard columns 6000. However, even in Neo Nectar, calling four of the same unit is difficult, so I would expect to see this as a back-up Grade 3 for Ahsha. 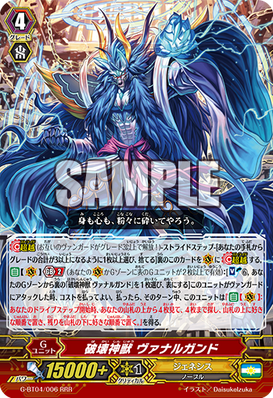 Genesis have had their new G-Unit, Destruction Deity Beast, Vanargand, revealed. His Generation Break 2 ability requires a Soul Blast of 6 and a G-Persona Blast. In return for this, when he attacks a vanguard (at the start of the Drive Step, but before making Drive Checks), you can look at the top four cards of your deck and put up to four of them back on top of the deck in any order – the others go to the bottom of the deck. This allows you to stack triggers and respond to your opponent’s guarding. If your opponent nullifies your attack, you can simply set up your deck to draw cards you need, or arrange triggers to give to rear-guards. This ability is really strong, but does require a heavy Soul cost – using him in conjunction with Dreaming Dragon would be a sensible idea. As the Soul Blasts occur mid-battle phase, you can call units such as Witch of Ravens, Camomile back from the Drop Zone for further attacks, allowing him to be a very aggressive unit. The other newly revealed unit is the 9000 power Grade 2, Mythic Serpent, Jormungand. At Generation Break 1, he gains 1000 power every time a unit is put in the Drop Zone from the Soul, making him the Grade 2 version of Mythic Beast, Hati. Virtually any Soul Blast effect will let him threaten the vanguard on his own, but he works best when combined with Hati. When Vanargand uses his skill, their column gains 12000, making them attack for 28000 combined. This means that any triggers donated by Vanargand are going to enhance an already strong column, possibly forcing a Perfect Guard. 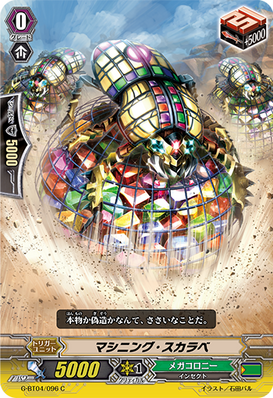 Machining players will be happy to see a new trigger in the form of Machining Scarab, even if it has no effects. Pure Machining decks always suffered from having only four different trigger units, essentially forcing them to run four stand triggers. With the addition of this trigger, Machining finally have more choice in their trigger line-up, and the ability to draw cards without sacrificing their consistency. Scissor Finger is a 7000 Grade 1 who can, at Generation Break 1, increase the power of the unit it boosts by 2000, provided all the opponent’s units are at rest. When this is combined with the Grade 2 Buster Mantis (who gains 3000 power when all the opponent’s units are rested) you can create an easy 21000 power column. This can easily help to deplete the opponent’s resources and leave them unable to guard when combined with effects that paralyse the vanguard. 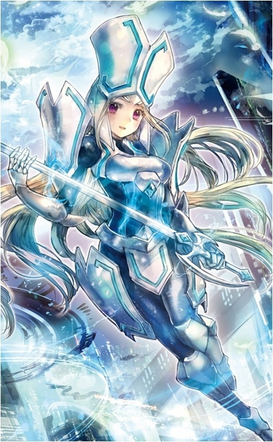 Swordsman of Light, Blaster Rapier Lola’s effect has finally been revealed! She is a 7000 power Grade 1 with Resist and the ability to grant all your copies of King of Knights, Alfred in the same column as her a permanent 1000 power. This is a little odd – the existing King of Knights, Alfred cannot be boosted, so there is some speculation that a new version might be released with a different effect (such as what happened with Phantom Blaster Dragon’s Break Ride form). In other news, information on a couple of cards from the upcoming Aqua Force clan booster has been released. Battle Siren, Melania features the new keyword ‘Wave’, which refers to the standard Aqua Force limitation on abilities depending on which attack of the turn it is. At Generation Break 1 and Wave 3 (so, the third or higher battle), she can Counter Blast 1 to draw a card and gain 5000 power, provided you have a Thavas vanguard. She also features resist, meaning that Aqua Force’s reliance on rear-guards is now less risky. Further, a new ‘revival Legion’ for Thundering Ripple, Genovious has been shown – Breaking Ripple, Miltiades. When Miltiades is placed on the vanguard circle, you may Counter Blast 1 to look at the top three cards of your deck, add one card with ‘Ripple’ in its name to your hand, and send the rest to the Drop Zone. This helps to set up Genovious’ Persona Blast and to fill the Drop Zone for Legion. His ability in Legion activates on attack – if the number of rested units in your front row is three or more (your Legion vanguard counts as two), you may choose one of your rear-guards and stand it, then Counter Charge 1. Then, if the number of rested units in your back row is three or more, you may draw a card. This ability is really good in the clan, helping to reset the costs of switching units’ positions and to draw cards. This can also help to set up further Genovious abilities by allowing you to draw into his copies and helping to ensure you have enough Counter Blasts to pay. Either way, this is very good support for an older card.