Though their origins are shrouded in mystery, there is one thing all Dark Eldar are in agreement about: Mandrakes are to be feared by all. Part Dark Eldar, part something much, much worse, Mandrakes are creatures of darkness. Darting from shadow to shadow they feed upon the suffering of others, utilizing the harnessed, raw power to freeze the unsuspecting with blasts of shilling energy.

With dark, rune-carved skin, while wielding wicked, saw-edged blades and wearing the flayed skin of those who betrayed them, the Mandrakes stalk the battlefield appearing out of nowhere, channelling their chilling auras to reduce their victims to shattered heap of frozen flesh and armour.

Mandrakess are an Elites choice for the Dark Eldar, competing with such units as Incubi, Grotesques, Wracks, Harlequins, Kabalite Trueborn and the Hekatrix Bloodbrides.

There is no denying that people got really, really exciting when the first Mandrake preview popped up on the Games Workshop site. For those in doubt about the Asian influence in the Dark Eldar design, it became quite clear when looking at the excellent design of these miniatures. 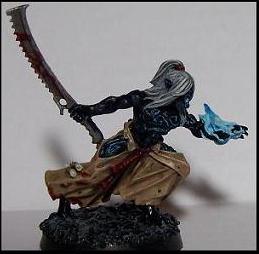 The Dark Eldar Mandrakes boxed set contains 5, multi-part, metal miniatures, and costs 18 pounds (or 14,56 if you buy it from Big Orbit games!). Thus making the set equally expensive as the five men strong Incubi boxed set. Though the box is certainly not cheap, this is to be expected given we are dealing with metal miniatures.

Upon opening the box we are met by five metal miniatures, though sadly there are only three different poses in there. I can’t help but feel that it wouldn’t have taken GW a lot of extra effort to add two more poses. Each Mandrake comes in two parts: the body and their flaming left arm. In principle, each arm is modelled to fit one, specific body. So, without investing some extra time and effort, this does mean that you will end up with only three, differently posed Mandrakes.

Naturally I wanted to make my Mandrakes a bit different than the usual, straight out of the box unit. As a result all Mandrakes you can see in the pictures have been subtly converted. Two additional tools were used to accomplish this, a pinvice and green stuff modelling putty:

TIP – To add some easy variation to your Mandrakes you can exchange some of their weapons by gently cutting them off at the wrist. Next use a pinvice with a small drill to carefully drill holes in both the loose hand and sword, as well as the arms. It is a good idea to first use a sharp modelling knife to drill a starting hole in both the hand and

the arm, as this will prevent nasty slips with the pinvice. Once you’re done drilling, cut a paperclip up and use the newly acquire metal rod to securely attach the hand to its new arm. Sure this takes some extra work, but the pin will prevent silly breaking accidents. For those wanting to add even more special touches to their Mandrakes I’d suggest having a go a using Green Stuff modelling putty to, for example, cover up a rune or two, make their Balefire larger, add extra hair or even to adjust the shapes of the skirts worn by the Mandrakes. 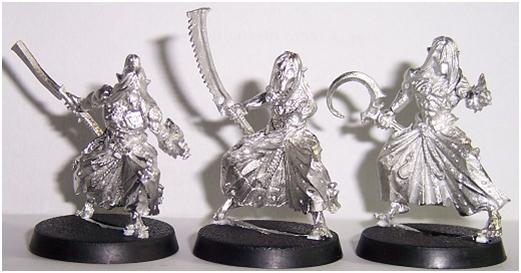 Mandrakes are able to appear out of nowhere and move about rather fast due to their Fleet, Infiltrate, Move Through Cover and Stealth rules. Much like most Dark Eldar, they are fairly fragile being only Toughness 3 and having a 5+ Invulnerable Save. Mandrakes will really benefit from getting a Pain Token, as this will give them the Feel No Pain bonus available to most Dark Eldar. Not only will the Pain Token make them more durable, it will also activate their ranged Balefire shooting attack.

Sadly I fear that Mandrakes will have way too much competition from the other Elites choices available in the Dark Eldar codex. They require even more finesse and planning to use effectively than other units. And as a result there will not be many competitive gamers, especially those attending tournaments, that will include this stunning looking unit in their army.

Regardless Mandrakes are fantastic for gamers putting together themed armies, painters will have a blast with the many different textures and let’s just face it, they really look fantastic! I am even tempted to use them as count as Ur-Ghuls (tough fighting pets that can be included in an Archon’s Court).

Let me be frank here, Mandrakes are a serious challenge. The runes on their skin are quite small, their dark skin takes time and painting fire isn’t always the easiest thing. Nonetheless I absolutely love these miniatures! In the past I have dealt with tough minis taking me less time than the Mandrakes, but that almost drove me insane nonetheless. The Mandrakes, challenging as they may be, are a delight to paint up. With every new element you add paint to they really start coming alive.

TIP – Dealing with the Mandrake runes can be a tricky thing, this is mainly because you are working with an inverted colour scheme. Normally the deeper areas are darker, however the Mandrake runes glow with eldritch energies. I would advice starting from a white, or light, undercoat. After all it is no problem to paint the dark skin of a Mandrake over a white undercoat. The runes and their Balefire arms as well as the flayed skin skirts, on the other hand, will greatly benefit from the lighter undercoat.

Secondly, there is the matter of Balefire. 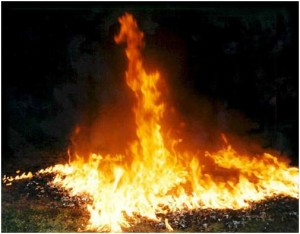 Personally I like to paint fire in a realistic manner, meaning that the combustion source (in this case the Mandrake’s arm) is the place where the most energy is released. As a result this spot is the lightest part of the flame, the further away from the combustion source the greater the chance of other colours showing up in the flame.

The Mandrakes boxed set contains enough metal parts to make five Mandrakes, in three basic poses. Without some conversion work you are unfortunately stuck with these distinct poses, something that does impact my final evaluation of this product.

If you do decide to invest the extra time to do some converting you can fairly easily make your unit unique. Even if you decide not to convert your Mandrakes you will be spending quite a bit of time to make their paintjob look good. On the one hand I have a hard time justifying spending so much time on a unit that, at its maximum, is 90 points, On the other hand though they are fantastic to paint up, the minis really come alive as you come closer and closer to their completion. 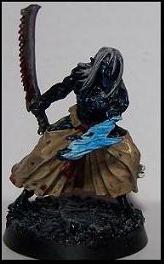 Gamewise the Mandrakes are certainly not a bad choice, they are quite good at what they do. However, I can’t help but feel that we will only rarely see them used in the more competitive armybuilds. Given that you can only buy the boxed set you are basically forced to take Mandrakes in multiples of five, something that is sadly also true for the new Incubi.

In conclusion, I personally love the Mandrakes, but given their limited poses and the significant amount of time you have to invest to make them look have decent, particularly if you are a starting painter, I can only give this boxed set seven stars.