Wyches are Dark Eldar who have devoted their entire existence to the mastery of gladiatorial fighting. In the arenas of Commorragh they battle each other, slaves and captured beasts all for the amusement of the depraved spectators coming from all levels of Dark Eldar society. Whenever the Kabals gather force to raid real space the Archons will go to great lengths to enlist the support of the Succubi and their Wyche Cults.

Wyches are a Troops choice for the Dark Eldar, though this kit can also be used to build a Succubus HQ model or even the Elite Hekatrix Bloodbrides.

I have always been a fan of the Dark Eldar, heck I even enjoyed the old models, especially the Wyches. However the test of time wasn’t very kind to them, luckily GW finally revisited the Dark Eldar this year. The Wyches may be my favourites models in the new range, they just looks so dynamic and agile.

The Dark Elder Wyches boxed set contains enough parts for 10 Wyches on two plastic sprues and costs 15 pounds (or 12,30 if you buy them from Big Orbit games).

The box gives you a whopping 92 pieces to put together 10 Wyches in a large variety of ways. Each Wyche comes in a minimum of seven pieces; 2 chest pieces, a set of arm, a set of legs and a head. Wyches are described as being pre-dominantly female and the box gives part for six female and four males, interesting to note though is that nearly all men have partially obscured faces. So the focus is definitely on the ladies in this kit. 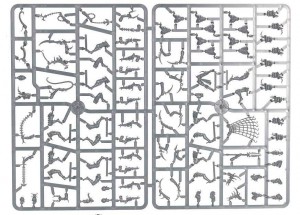 All the legs have been labelled to make assembly more straightforward, although with a bit of cutting and conversion work you will be able to put legs together that normally won’t fit. Though this will require more work it will enable you to add even more poses to a large Wyche Cult army.

In addition to enough bits to arm all your Wyches with their basic kit you also get the necessary materials to put together a Hekatrix leader, as well as a set of all the special Wyche weapons. The Hekatrix comes with all the available options, save for a Venom Blade and the Phantasm Grenade Launcher. The first is easily solved as a quick green wash over a metal blade will make it look rather venomous. The Launcher is more challenging to solve, though you can of course borrow one from a Kabalite Warriors box.

The only downside of the kit is that you only get one of each special Wyche weapon while a standard Wyche unit will be able to upgrade one mini per five with a special weapon (Hekatrix Bloodbrides can even upgrade one per three mini). So if you want to add two of the same weapons you will need to get a second box or get a little creative.

TIP: Want to add more of the same weapon, but don’t have the bits or extra cash? Then take a hint from the Imperial Guard and field those special weapons in weapon teams. Simply give one Wyche the Impaler and another the Shardnet, the same goes for the Razorflails and the Hydra Gauntlets. Don’t forget to remove the splinter pistol or close combat weapon from the other hand, this as the special weapon is meant to replace both of these.

The special Wyche Weapons also look great and even come with some extras. The Shardnet and Impaler are not much more than a net and spear, but this isn’t true for the other weapons. The Razorflails are weapons that can be fielded as both swords and whips and you actually get two weapons, one in each form. I thought it is also rather cool that you get a special, ritually-scarred head to go with the set. And finally we have the Hydra Gauntlets, whose wielders have a fully armoured helmet that will offer the needed extra protection when wielding these sharp and shattering weapons.

Wyches are superb close combat fighters but they definitely need an effective delivery device in order to get the most out of them. If left to walk across the battlefield they won’t last long, possessing on a 6+ save. You basically have three different methods of getting them into close combat, mount them on a Raider, a Venom (only suited for small units up to 5 models) or let them arrive through a Webway Portal. 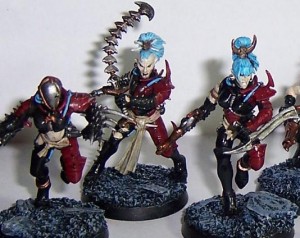 Once they get stuck in though things get very interesting as they are both able to assault into cover and have a healthy 4+ save once in close combat. Add in a Hekatrix and a few weapons and you have a very formidable fighting force that will rack up a pain token very fast giving them Feel No Pain as a bonus.

The special Wyche weapons are also rather interesting. The Impaler and Shardnet will allow you to take away attacks, which can be very effective again strong and high attack opponents. Razorflails, on the other hand, will allow the wielder to re-roll failed to hit and to wound rolls. And, finally, Hydra Gauntlet will give you +D6 rather than the normal +1 attacks, making this an ideal weapon when wielded against large masses of weaker opponents.

The Elites version of the Wyches, the Hekatrix Bloodbrides, quite simply do the same as Wyches just better and with more special weapons. Furthermore you can also make a HQ Succubus mini with this kit. Being the cheapest HQ choice and adding them to a Wyche squad will often ensure they make it into close combat to do quite a bit of damage.

Like pretty much all the new Dark Eldar toys Wyches require a bit of time and work to look decent. With the many different layers (skin, Wyche suit, Wyche armour, trophies etc) and segmented armour it is easy to mess things up. My main advice would be to take your time with each mini as it will really show once they’re all done.

For conversion opportunities you could look at the unhelmeted heads from the Kabalites kit, leftovers from the Hellions and there are even a few ideal bits on the Raider sprue to make your own Impaler and Shardnet! The pictures of painted Wyches in this article make use of these simple, yet quite effective bitswaps to add even more variety to the unit.

You could also use a combination of Wyche and Hellion bits to make a custom Beastmaster. Finally, if we are to believe the rumors, Games Workshop will be releasing a plastic Venom kit in a few months which is supposed to come with some Wyche crew hanging off it. Those bits are bound to add even more cool bits to make your Wyches even more dynamic and deadly! Given that Wyches are quite affordable it may even be worth to buy an extra box to replace the Raider and Ravager crews, which would look great in a full Wyche Cult-themed force.

The Wyches plastic kit comes with enough bit to make 10 Wyches with nearly all of the options available to them in the codex. The models are very dynamic and versatile, being interchangeable with most other Dark Eldar and even Eldar plastic kits.

The minis are easy to put together, requiring minimal preparation work, which is a good thing as the paintjob can be challenging at times. There is no arguing with the end result though, they really do look the part of sci-fi gladiators!

Furthermore the kit is quite affordable, so those amongst us who have been dreaming of fielding a full Wyche Cult army can finally have a go at them. Heck the only flaw I can find with this kit is that you only get a single set of each of the special Wyche weapons

So the final verdict is 9 out of ten stars!