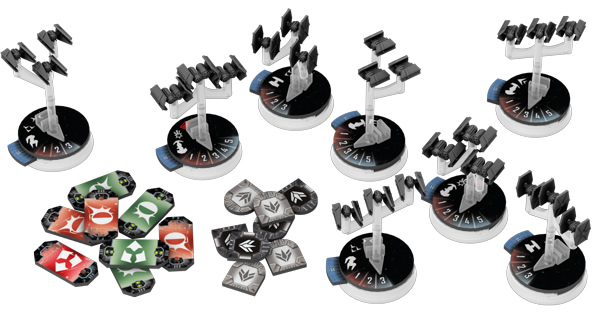 Escorts, swarms, cannon fodder, the Imperial starfighters have many different terms but what you can’t deny is their effectiveness in their roles. The Imperial Fighter Squadrons Expansion pack brings with it four types of starfighter, three of them new entries to Armada:

TIE Advanced: Commonly known as Darth Vader’s personal fighter, the TIE Advanced, on paper, looks like a simple upgrade from the classic TIE fighter. Keeping the same movement and anti-squadron fire power, they boast an improved hull, a black dice vs ships and they’ve traded Swarm for the Escort ability. For the small 4 point increase, the Advanced brings a bit more to the field over a regular TIE. Utilising the Escort ability will be their primary role, flying alongside Bombers to keep them from harm. As I mentioned, Advanceds are known because Darth Vader piloted one in A New Hope and he appears here as the character pilot. With double Brace, 3 blue dice, 1 black anti-squadron die and 1 black anti-ship die you get a lot more punch from him, while his pseudo-Bomber ability means that his critical icons add 1 damage to the total. This means  that, against squadrons, he could potentially deal five damage in one shot, which is enough to insta-kill any squadron. However, this comes at a cost of 21 points, which is a bit steep for a sole anti-squadron ship. I can’t see the Advanced being used a huge amount, the same fate they’ve had in Star Wars X-Wing, as their all-round stats just don’t compare to the more specialised squadrons in most scenarios.

TIE Bomber: On to the squadrons they might be escorting, the TIE Bombers. A single black dice for both of its attacks looks lacklustre, but it has its namesake ability “Bomber” so against ships it can deal critical damage. They also have the Heavy rule, meaning that they don’t cause enemy squadrons to be engaged, which, when you add in their single black die, you can clearly see these squadrons should not be anywhere near opposing squadrons. At just 9 points they’re cheap and a swarm of these lumbering in late game could finish off ships easily. With a speed of 4, the Bomber is quite fast, faster then the Rebel Y-Wings and B-Wings who fill a similar role, and when you mix Major Rhymer’s character squadron into a swarm you get the added ability of being able to attack at close-medium range too. This dovetails beautifully in with escorting squadrons; the escorts move in to tie-up any surrounding flights, while the Bombers hang back and freely unload their bombs against the enemy ship.

TIE Interceptor: After all this talk of escorts and bombing, what about offence? That’s where the TIE Interceptors come in. At 11 points they’re only a small bump up from a TIE Fighter and they bring a deadly stat line to your fleet: they have a speed of 5, 4 blue dice against squadrons, the Swarm ability which grants them a reroll and, if that’s not enough, they also have Counter 2. When a squadron attacks them, even if the Interceptors are destroyed, you get to roll 2 blue dice back against the enemy. These fighters are a threat to any squadron and if left unchecked they could quickly ruin an opponent’s bombing run. Soontir Fel, the character pilot, adds a nasty ability to these already vicious fighters. If a squadron attacks someone else whilst engaged with Soontir, then they suffer a damage for not attacking him. Your opponent’s plans to deny you your Swarm rerolls or to take out the Bombers will need to be reconsidered if Soontir is in play flying as a wingman because that damage will soon add up. Additionally, weilding a Brace and Scatter defense token he won’t be easy to take out even if he is targeted. All this for just 18 points is fantastic and I will be happily fielding Soontir with accompanying Interceptors in the future.

Unlike the Rebel Fighters, the synergy between these squadrons outside of the usual escorting roles doesn’t seem apparent, but there is something to be said about joining Soontir up with “Mauler” Mithel, the TIE Fighter character pilot. He has the same stats as a normal TIE Fighter, but its his ability that the 15 points pay for. After he moves, each squadron engaged with him automatically suffers one damage. That’s painful. Stick him to the side of Soontir, fly them in to an opposing swarm and watch your opponent try to prioritise who to take out first. Again, as seems to be standard for Imperial characters, Mithel has a Brace and a Scatter token to keep himself alive.

I won’t cover the iconic TIE Fighters because we learnt all about them from the Core Set and this expansion doesn’t add much to them, other then enabling you to fly an even larger swarm. Comparing this expansion to the Rebel Fighters, I feel that the Imperials come off marginally worse because the variant TIEs don’t add huge amounts over the original Fighters, but they are all still inexpensive which is the Imperial way. Mass-produced, cheaply made and thrown at the enemy en-mass is the classic strategy and that rings true in Star Wars Armada.

Big Orbit are a hobby games retailer that specialises in the sale of individual trading cards and game components – Big Orbit also runs a Gaming venue in Evesham, Worcs, UK.