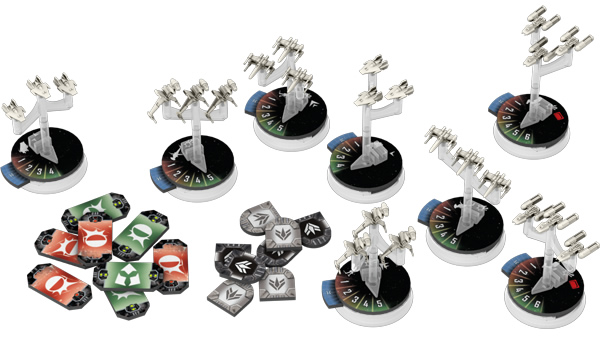 X-Wing: The X-Wings were already included in the Core Se,t but we get a new character squadron, Wedge Antilles, so I’ll start there. Coming in at a fair few points more than a normal X-Wing squadron, Wedge thankfully brings a lot for this extra cost. He keeps the Bomber and Escort rule and gains the ability of adding 2 blue dice to his attack pool against activated squadrons. Rolling 6 dice against other squadrons is deadly, even in the mirror, and he could easily take out other character squadrons in one salvo by denying the use of defense tokens with accuracy results. A nice little bit of synergy is with the Y-Wing character, “Dutch” Vander, whose ability causes a squadron to be switched to activated (more on him later). So use a Squadron dial, activate Wedge & Dutch, and pop an opposing character squadron in one turn. With double Brace tokens he has a good chance of survival, but combine him with his wingman and Wedge will be your sniping squadron.

A-Wing: A-Wings introduce us to the the new Counter ability. After being attacked, the squadron can shoot back (even if destroyed), making engaging squadrons beneficial in most situations. A single black dice against ships looks nice, until you remember that criticals don’t apply to them, so you really don’t want to be engaging ships with A-Wings (even if you want to try to recreate a certain infamous scene). They are however an exceptionally fast squadron at speed 5 and, with 3 blue dice against other squadrons, they fill the role of an interceptor perfectly. Tycho Celchu is the character pilot and he is allowed to move even if engaged, which fits in with how manoeuvrable the A-Wing is and will let him flee unfavourable engagements.

B-Wing: Now for the B-Wing, my personal favourite fighter. With 5 hull, blue and black anti-ship dice and Bomber, this squadron is designed for tackling the big boys, but the squadron is definitely a hybrid fighter-bomber as it can perform well in either role. A pair of these can easily put the hurt on ships late game and when you look at Keyan Farlander, who allows you to reroll any of your dice when attacking a ship, this squadron can do some serious damage in one turn. However this comes at the high cost of 20 points, which is steep for a single squadron with only double Brace and a slow speed of just 2. Combining Keyan with the new Nebulon-B title Yavaris, which allows him to attack twice in one turn, will be downright brutal and a ship-killing move. Right now with only X-Wings and TIE Fighters, squadrons have not been much of a hinderance to large ships, but now it has all changed with the B-Wings.

Y-Wing: Speaking of damaging ships, the last ship in this pack is the Y-Wing. In the stories, the B-Wing replaces the ageing Y-Wing in its role of anti-ship combat and this rings true in Armada. Having only 1 black dice against ships, still with Bomber, but now carrying the Heavy rule (They don’t prevent squadrons from disengaging), their damage potential isn’t as high as the B-Wing, especially their anti-squadron fire power which is a mere 2 blue dice. They do however come in 4 points cheaper and have an increased speed and hull so they can manoeuvre more easily with a bit more survivability. In the character slot we find “Dutch” Vander who brings an ability that sounds just like an ion cannon shot. When he damages a squadron they toggle to being activated, and if they already had activated they instead take 1 damage. A punishing ability if the opponent has flown in to tie you up, but otherwise its only a minor ability when used on its own, reflected by him only being 2 more points then a normal Y-Wing. However, as I wrote above, if you add Wedge in to the mix this becomes a nasty attack pattern.

Speaking from a fluff perspective the Rebel Fighters really shine with their ethos of using small snubfighters to tackle the larger ships of the Imperial, as they simply didn’t have the resources to produce massive vessels. When you look through the stats of each squadron you see that they all threaten to damage any ship, including the A-Wing, who, even with just a single black dice, still has a 75% chance to inflict one damage. Over the course of a game, this begins to add up and chipping away at an opponent’s shields will take its toll.

Each expansion pack has 2 of each squadron so it’s enough to supplement your fleet, but I can already see the need to buy additional expansion packs. Having only two A-Wings seems a little low as it would be good to fly them in a larger group where they can bring their number to bear on unsuspecting squadrons, and Y-Wings need to be supported by further squadrons if you want them to survive contact with the enemy. I feel this pack will bring a much desired aspect to the game, squadrons will become much more important now and will have a much bigger influence on the game as a whole. Wave 1 is going to make a big impact on Star Wars Armada.

Big Orbit are a hobby games retailer that specialises in the sale of individual trading cards and game components – Big Orbit also runs a Gaming venue in Evesham, Worcs, UK.