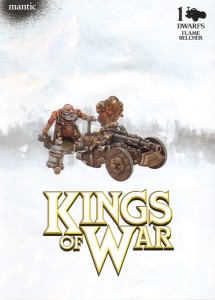 The Dwarf Flamebelcher blasts great bouts of fire from it’s nozzle, it envelopes enemy regiments in such intense heat as to burn flesh and melt armour.

These rare warmachines are held in great reverence in a Dwarf army for no other weapon creates such fear in an enemy – those who oppose the dwarfs will do well to stay away from this fearsome weapon’s great maw.

After tearing off the cellophane and opening the box the first thing that occurred to me was that you get three models for the price of one here. You get the normal artillery sprue from the Leadbelcher kit as well as metal parts for the Flamebelcher and performing a weapon swap looks like it would be simplicity itself.

The box includes 2 sprues and a selection of metal components:

The Flamebelcher kit is basically a Leadbelcher kit with extra metal components.

As with the Leadbelcher kit there are 2 plastic sprues. The artillery sprue contains all the parts required to build a Leadbelcher cannon or organ gun as well as an ammo chest. The troop sprue contains parts for 2 crew, a dwarf with a selection of arms and heads that looks like he’s in charge (we’ll call him an engineer) and a loader. Also included on this sprue is a pair of “misfire” boots and a spare warhammer. This sprue is heavily based on the Ironwatch troop sprue, the half with the legs on it being identical, the other half of the sprue contains the unique engineer and loader parts.

The artillery piece is very nice and as expected it is easy to swap the weapon that is mounted on the gun carriage, the various weapons either rest on the carriage or can be wedged in place. The Flamebelcher cannon is nicely detailed and I like the fact that thought has been given to how the weapon could work, the sculpt includes both a pump and firing mechanism.

The engineer is a great little  model that is very characterful and in the build that I did for this review I just had to give him a pipe. Sadly the loader is much less impressive, with a poorly detailed area right on the front of the model next to the shell he is holding, this could have been avoided through more intelligent sculpting and/or sprue layout. Another issue with the loader model is that he is holding a shell, this is a flame cannon so it doesn’t really fit, I would probably replace him with another Mantic Dwarf model kitted out with the engineers left over arms.

The kit was very easy to build, the plastics were cut from their sprues, cleaned up and glued together in minutes. The metal components were also easy to prepare, as mentioned in our Ironguard review the alloyed used by Mantic is much easy to work with than that used by many other manufacturers.

Finally, value for money, as usual Mantic scores here. While you only get one artillery piece for the same £12.50 RRP which could buy you two Leadbelchers if you bought the Leadbelcher Battery kit, you do of course get the extra metal components and the model can be made up as any of three different artillery pieces. Also the Flamebelcher is significantly cheaper than the Games Workshop Flame Cannon (£20), although the GW kit is all metal, all in all I feel it represents good value for money.

The Dwarf Flamebelcher is a nice little kit and it’s great that you essentially get three different artillery kits in one box.

The engineer is one of the best plastic dwarfs we have seen from Mantic and it’s a shame he has to share a sprue with the rather poor loader model.

As usual, this being Mantic, the model represents good value for money.