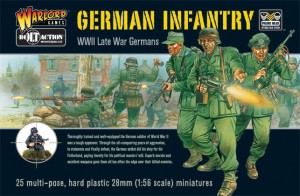 At Big Orbit games we were very excited when we first heard about the new Bolt Action late war WWII German infantry from Warlord Games. This is the first plastic kit from the Bolt Action range, in fact this is the world’s first 28mm hard plastic multi-pose World War II infantry.

So, it was with a great deal of anticipation that we received our samples of the new German infantry sprues from Warlord Games…

The first thing I noticed after opening the package was the impressive level of detail on the seperate weapons sprue, also the large number of weapons available. The standard issue Kar98K rifle is present in large numbers along with a host of automatic weapons, a pistol and Panzerfaust, along with a large range of accessories.

The body sprue also looked promising with 5 soldiers per sprues and with more than enough heads and arms to add lots of variety to your troops.

Close-ups of the spures can be found by clicking the thumbnails below:

Each body sprue contains 5 infantrymen, 3 single part torsos & legs and 2 with 1 seperate leg, this has been done to ensure good moulding rather than additional build options. So my initial impression of a large number of build options might have been misplaced as there will be quite a bit of repetition in general body form across a box of these miniatures, with 5 of each torso/legs combination in each box.

That said, the body sprue includes five interchangeable backpacks, eight different heads and  eight sets of arms, so by swapping these it is possible to add sufficient variety that your troops won’t look too samey. Of the heads available we have six with helmets, one with a field cap and an officers head, additionally the heads are interchangeable with metal heads from the existing Bolt Action range.

The number of different weapons available on the weapons sprue is impressive; the standard issue Kar98K rifle is present in large numbers, including  variants with a bayonets and sniper scopes attached. Also included is a range of automatic weapons; a MP40 sub-machine gun, a StG44 assault rifle, a MG34, a MG42 and a semi-automatic GW43. In addition to this you’ll find stick grenades, a Panzerfaust, field glasses, Walther P38 pistol,  and ammo packs for the MP40.

The StG44, MG42 and Panzerfaust mark these troops as late war period (as subtitled on the box), the ankle boots and gaiters worn by these models also place them firmly in the later half of the war.

The sculpts are of very high quality with both the soldiers and weapons being very well detailed, and there are few areas where detail has been compromised to facilitate casting, note mention of separate legs to ensure good moulding above. Renedra casts Warlord Games’ plastics and their experience along with intelligent sculpting has delivered some great results.

I have seen some criticism of the body sculpts due to the fact that rifle ammo pouches are sculpted onto the models by default, to me this isn’t a huge issue. These being plastic models they can be easily removed to be replaced by MG40 ammo pouches (included on the weapons sprue), this isn’t too much of a chore as the majority of your models should be toting rifles anyway.

The sprues we were sent had little in the way of mould lines and were relatively easy to put together. Although I did feel I could have done with an extra pair of hands occasionally when getting the arms and weapons to fit together while gluing them but I have this problem with many plastic kits, it’s probably just me. All in all, these miniatures were a pleasure to work with and I’m looking forward to adding more to my collection.

Finally on to price, RRP of the boxed set is £20, that equates to £0.80 per model, this is a respectable price point. Metal WWII German Infantry are typically priced between £1.00 – £1.30 and these miniatures will typically come supplied with less options than Warlords’ plastic Germans and being metal will be harder to convert (if required).

The Bolt Action Germany Infantry boxed set is an exceptionally well sculpted plastic kit with plenty of head and arm options and a large number of different weapons to choose from.

They represent good value for money, at £0.80 per model, and I would recommend them to anyone who collects WWII Germans.

These miniatures were a pleasure to work with, being reasonably easy to build and I’m looking forward to adding more to my collection.

The only reason this kit isn’t getting a full 10/10 is due to fact that there are fundamentally only 5 core poses, if they were articulated at the waist or something similar I wouldn’t hesitate in giving this boxed set full marks but as it is it gets…