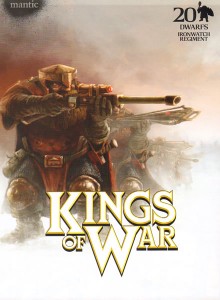 Standing back and shooting up the enemy before the hand to hand combat begins has always been a trick of a good dwarf army. Under the cover of a withering bombardment of shot, the Dwarfs advance slowly, those ranks with charged weapons filtering through those who have discharged theirs, giving them time to reload and repeat the process. By the time enemy arrives, there are usually precious few of them left to offer resistance to the Dwarfs’ stout warhammers.

The first thing I noticed when I got my hands on the Dwarf Ironwatch Regiment box was that it is much thicker (deeper) than other Mantic Regiment boxes, being basically the size of one of their Detachment boxes.

Does this mean there are even more goodies than usual in the box? Is this a case of quantity over quality? To find out read on…

After breaking through the cellophane wrapping and opening the box I was presented with 10 sprues, each identical to the one pictured below, the box also includes 20 bases as well as the usual Mantic poster guide and foam.

I’m a little disappointed to see just one type of sprue in here, the Ironwatch Troop sprue, a dedicated Ironwatch command sprue would have been a nice addition, that said Ironclad command or Ironguard can be used as Ironwatch command.

Onto the contents of each sprue, we have components enough to build 2 Ironwatch, with separate legs, bodies, heads and weapons, along with spares in the form of a double handed hammer and a stock for a rifle or crossbow, so that these weapons can be built unheld.

Taking a closer look, the two swappable heads look very familiar… Wait a minute, they are the same as the swappable heads on the Ironclad Troop sprues, also both sets of legs are the same as those from the Ironclad kit. This is a disappointing as it would have been nice to have the option to swap parts between the two kits, it also means that half the dwarfs in your whole army are going to have the same couple of heads. Some sort of dwarf cloning experiment clearly…

Within the kit itself the level of customisation is pretty respectable, with 4 leg and body combinations, add head swaps and you have got 6, finally weapon swaps makes 12 different model builds possible. However bearing in mind that a unit is going to contain only one weapon type (unless Mantics new games system says otherwise) then a single unit can potentially contain 6 differently built models, this isn’t bad as most missile units will be smaller than melee units anyway.

As for the models themselves, they are incredibly easy to put together and I have to say that they are very nice to look at. They are as characterful as the previous dwarfs we have reviewed and I particularly like the rifle that these guys can be equipped with.

Finally, value for money, well they are from Mantic, need I say more… What? I do have to say more? Oh, OK… As we would expect these miniatures represent great value for money coming it at just £0.63 each, bargain! Right, everyone happy? Great!

After the reviewing the previous 2 Mantic Dwarf releases I must admit to feeling slightly underwhelmed with the Dwarf Ironwatch.

Not that there is anything wrong with the kit as such, I just feel there is a lack of ambition being displayed here and it’s just fallen short of the dizzyingly high standards I have come to expect from Mantic.

However, having got that off my chest, the Ironwatch are a pleasure to work with, represent great value for money and look great when built. They will definitely be forming a part of my own growing Mantic dwarf army.

So overall the Mantic Games Dwarf Ironwatch get…