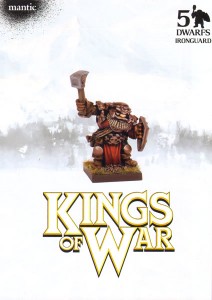 Dwarfs are the third range of miniatures from Mantic Games, and the first metal miniatures for this army are the Ironguard.

The Dwarf Ironguard are veterans of wars fought long ago, impassive and grim. Leading from the front, Ironguard often take up the leadership of other Dwarf Regiments, showing their kin how to wage war in a “proper manner.”

Ironguard carry a mix of weapons into battle, heavy hammers, sharp pickaxes and iron shields, fully prepared for any enemy that should confront them. As solid as the mountain realms themselves, Ironguard are a revered part of a Dwarf army.

The first thing that struck me on getting my hands on the Ironguard box was how heavy it was and after tearing the cellophane off I did indeed find 5 hefty little guys in there. In appearance they are essentially slightly more ornate Ironclads, which is not a bad thing as the Ironclads scored well in our recent Dwarf Ironclad review. The box contents are pictured below.

The Dwarf Ironguard sculpts are very characterful, with bristling beards and a look of grim determination on their faces. The models are in keeping with the first Mantic Dwarf releases, the Ironclads, which is a good thing as they can be used to add variety to Ironclad units and to can be used a command group in a unit of Ironclads to denote veteran status.

The quality of the sculpts is superior to the plastic Ironclads with a good degree of detail on all five models, the detail on the bodies with the interchangeable heads is particularly fine.

The only downside to this boxed set is that there are minimal customisation options available, with just two  models offering the possibility of head swaps or adjustable arm positions out of the box. That said, due to the fact that these guys are elites most collections will include no more than one or two boxes of these models so this isn’t a huge issue.

OK, time to put these guys together. This is the first box of metal Mantic miniatures I personally have reviewed and I was impressed with how easy they were to clean up, not that there was a lot of flash or mould lines that needed removing. The alloy used to cast these miniatures seemed significantly easier to work with than many other miniatures that are available. Additionally, the miniatures were very easy to build as the thick Dwarven necks & limbs provide a broad area of contact for super glue to grab hold of.

My first impressions regarding the amount of metal you get in this boxed set were confirmed when comparing the weight of 5 Games Workshop Hammerers, the Ironguard weighed in at two thirds heavier and at £2.50 RRP less per box they represent great value for money.

The Dwarf Ironguard are a worthy addition to Mantic’s growing Dwarf range.

The sculpts are characterful and of high quality and are in keeping with the Dwarf Ironclads that it is likely they will be used to lead on the battlefield.

They are a pleasure to work with being easy to clean up and build and they also represent great value for money.

So overall the Mantic Games Dwarf Ironguard get…