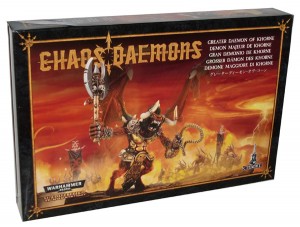 The release of “The Realms of Chaos” in 1989 was a true landmark event for the hobby, and to my mind marked a coming of age for Games Workshop. It was at this point where they found their voice and really fleshed out the dark side of their universe(s).

Of course, with the realisation of the story side came the fulfillment of the physical side, in the form of a plethora of models. As a kid at the time I was unable to afford many of them (and as a married man today it might be argued that I’m not much better off now), but one model I saved up for was the Bloodthirster. It was the dogs, erm, head.

After a 15-year hobby gap, one of the first things I did was to check what vintage gold I still had stuck in my parent’s attic, and yes, you guessed it, it was finding the old Bloodthirster that I was most pleased about. It had lost none of its charm over the intervening years.

So, when the guys at TW suggested that I reviewed the latest incarnation of the Bloodthirster in order to celebrate the release of the new chaos daemons in August I narrowed my eyes and sharpened my pen. I’d seen this Bloodthirster interloper on the GW website and I was not keen on the aesthetic at all; I was preparing to tell the world why GW should never have messed about with a design classic.

Having reviewed a number of Mantic products recently, I have been somewhat spoiled by the way they package their models.  I’m not saying that I fully trust those boxes to work as proper carry cases (though many on the internet seem happy), but certainly the way GW pack their models seems poor by comparison.  The flimsy cardboard box doesn’t seem as good and the way the components rattle about in their plastic compartments is begging for a bit of foam padding.

The box is heavy and this is because GW have seen fit to give you not one, but two torso’s: one for each of the heads supplied.  I wasn’t really keen on either design (my prejudices to the old design immediately showing themselves), but of the two, I slightly preferred the head without the horns already attached.

The model is rich with detail, mainly of the skull kind, this being Khorne’s (and GW’s) thing.  This detail is well rendered, as you’d expect from one of their metal kits.  There is obviously quite a bit of flash to be cleaned with this kit, what with their being so many components, lots of spikes, generally pointiness and such-like.

The models is assembled in quite a static pose out of the box, but the components are so heavy that some major pinning is going to be needed in order for this thing to stay together.  The one good thing about having to pin this model together is that at least it is an invitation to alter the pose with the judicious application of green stuff, but with the release of the plastic daemon prince kit, it can only be hoped that there are plans for the greater daemons to follow.

Compared to my original model, this Bloodthirster stands much taller and has a much more fluid pose, indicating movement in a much better way; I may prefer the old model’s head, but the new model wins in every other area.  It seems that my initial thought on them improving on perfection were based on a flawed interpretation of what was perfect.