Trolls are large, hideous creatures with rolex replica watches long limbs and cold damp hides. Their most notable characteristic is their ability to regenerate when damaged.

I couldn’t help but be impressed when I first saw the new River Troll models in White Dwarf. I was particularly taken by the first rendition in plastic of projectile vomit, as I think was everyone else.

On opening the box the first thing that struck me was how little plastic it contained, I’d just reviewed the Orc  Boar Boyz boxed set, which is nearly half the price, and it contained the same number of sprues.

The box contains contains 3 sprues and are pictured below.

So first impression is that this kit, for all that the models look cool, may not represent good value for money. 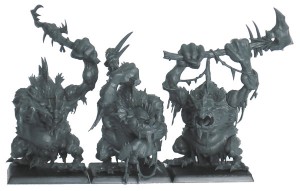 As for the models themselves, there are a good number of options, with 3 bodies, 5 head and 5 sets of arms, that’s 75 different builds right there, more once you start mixing up arm combinations. This is more than adequate as no army is going to field more that a handful of these miniatures.

One intriguing feature of these models is the way the heads fit together, I assume this is done in order to mould the highly characterful sculpts, whatever the reason most of the heads come in three parts and all look great.

Too be honest there aren’t a vast number of positives with this kit, not that there is anything massively wrong with it, it just does what it says on the tin and does it well. 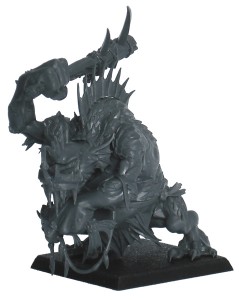 There’s are a few negatives however.

Firstly, the bodies were very difficult to fit together, especially troll B (unless ours was dodgy), this brings back memories of the Tau Crisis Battlesuit whose multi-part body also refused to join together neatly.

The solution is to use rubber bands to hold the parts tight while the plastic glue dries, also a little trimming can help if the parts serious don’t want to join together.

Although this issue can be worked around it is annoying especially if not forewarned and you don’t have any rubber bands to hand. In this case you’ll find yourself having to hold the parts together for 5-10 minutes at a time while the glue dries.

Secondly, these models seem quite expensive to me. As mentioned at the start of this post the Boar Boyz we reviewed a couple of days ago come it at just over half the price of this kit and both come with 3 sprues.

I suppose in some ways it would be fairer to compare this kit with the Killa Kans kit reviewed a few months ago as both contain 3 medium size models and both come in at the same price point. However, the Killa Kan Kit was far more intricate, came with about twice as many parts and the sprues were much more densely populated, the River Trolls lose again…

So however you look at it the River Trolls kit is expensive.

Finally, and controversially, after thinking about it, I don’t like the projectile vomit…

This is a nice kit, the models look great and is easy to work with bar issues with gluing the body together. However it is expensive and that has to bring a possible 8 out of 10 down to a…