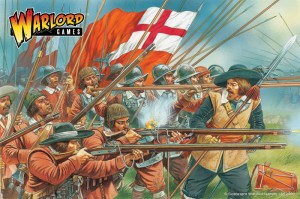 Warlord Games are busily releasing a number of historical sets for various time frames, from Romans in Testudo formation to German SS troopers, they are slowly building up a catalogue of miniatures that any historical gamer should be looking upon greedily.

With the publication of their Black Powder rulebook just over a year ago they have provided an entertaining and well-crafted set of rules with which to use their (and other manufacturers) models in a wide ranging wargames settings, and having announced earlier in the year that they are working on a number of supplements to detail various periods in history, it really seems like there has never been such an exciting time to get into period wargaming.

The English Civil War is one of the periods in history that I am most interested in, and when Warlord started releasing the Pike and Shotte range of models I started gathering them just as a collector and painter.  Having been lured in with such dainties as the King Charles I model, and with the wealth of options available for historic wargaming, it seems to be the right time to take the plunge and build an army ready to march across the British countryside.

From just reading about the box the signs seemed good. 40 models for an RRP of just £18 ?  A few years ago that alone would have caused me to dismiss them out of hand as being of definite poor quality; but having seen what Mantic are doing these days, it is no longer as far-fetched to believe that plastic models can be both well-priced and well-crafted.

The package exterior filled me with hope, with the period-style artwork, and lots of well thought out information on the period and models.  If they put that much thought into the box then surely they wouldn’t cut any corners with the actual models ?

Inside the box, along with the sprues and the bases, was a nice leaflet with yet more detail.  Containing information on the period, paint schemes, unit organisation as well as some banners ready to cut out and use, this small leaflet was a great little bonus, and shows a really well thought out approach from Warlord Games. As the contents are similar (and sometimes the same) for all of Warlords Pike and Shotte basic regiments it’s worth getting one of each box just for the packaging and extras.

Getting onto the sprues themselves, it could immediately be seen that the sculpting and casting quality is at a high standard. The were some minor gripes, such as the lack of variety and a couple of minor aesthetics issues, but these were well mitigated by the cost of the product itself.  Having counted 42 bodies over the 4 sprues (as opposed the the 40 advertised), I checked to see whether it was possible to build some extra men, and it seems that the command sprue does indeed provide enough extras for you to produce an extra officer, sergeant or musician.

Looks-wise I had a problem with the tiny heads on the soldiers, but the reason for this became apparent when I started clipping the components of the sprue, each head is designed to carry one of the many hats provided.  This in turn resolved my other minor gripe, those hats provide a way of giving instant variation to the unit.

So a cheap box with no negative aspects, and with ‘2’ bonus models included, it has to be: