A veritable behemoth that builds it’s lair in the deepest darkest depths of the forest, where nothing is safe from it’s rapacious appetite from careless Beastmen herds to the mighty Cygor. Canny and cunning as ever, the shamen of Forest Goblin tribes have developed methods of cajoling or coercing the services of these gargantuan beasts. Bedecking their enormous carapaces with comic-looking howdahs, weapon platforms or shrines, enables even the least threatening greenskin to command ultimate respect as they power forth crushing all in their path…..

The Arachnarok is a rare troop choice from the Orc & Goblin army book, but may also be taken as a shrine mount for a Goblin Great Shaman or carry an upgrade ‘flinger’ that is a unique war-machine.

Like a child fed on E-numbers for a week (I’m a dyed in the wool Greenskin at heart!), I was almost unable to control my excitement at being given the opportunity to assemble and review this creation. When I finally got my clammy mitts on the goodies I was blown away! I must admit to being a little intimidated as reality hit home, could I do justice to the sheer level of detail portrayed over such a huge kit? Only time would tell…….

The 95 part kit was, as expected, up to the usual phenomenal standard one would come to expect from GW’s current plastic output. The individual details are portrayed perfectly in every aspect of the kit, from the humour of the goblins to the utter horror & revulsion created by a spider the size of a large two-storey building. Warning! Staring at the components can cause delay in assembly.

I’m an experienced model maker (with 30 years experience), but was under no illusion, having perused the instructions, that I would not be calling on ALL those years experience. The build got under-way at a flying start. The assembly of the actual spider proper (up to and including part 41), was a cinch. The parts were expertly designed to ‘click’ reassuringly into place during dry-fitting and each overlapped subtly to hide prominent seams.

My  relationship with this kit began to show signs of strain as the instruction manual entered phases 6 & 7. At this point you are going to be putting some terra-firma under your not-so-wee beasty (basing). The manual will have you believe that your base is square (which it clearly isn’t!). 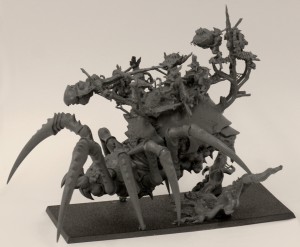 TOP- TIP 1. Remember your spider needs to face one of the short sides of your RECTANGULAR base! ( I nearly didn’t!).
From part 8 of the instruction manual we were heading for marriage guidance! The assembly & attachment of your howdah, (prior to deciding your final choice of build), requires a steady hand, persistance & an inexhaustible patience!

TOP-TIP 2. When the instructions advise a dry-fit assembly, heed the advice!

On fitting the howdah, it’s decision time. For our review model, I took the decision to build the one choice that would use the most parts! So, we were going to end up proud owners of a ‘flinger’ (an impressive mobile artillery platform).

It was from here on in that the kit became a little ‘testing’.

The various howdah options all required some seriously fiddly work, and it was at this point that my one and only gripe arose. I found the instruction manual to be not only inaccurate, but the diagrams were often misleading or at best unclear. Fortunately, the kit was so good it didn’t detract too much from my enjoyment of the overall experience.

As a basic model with no upgrades your Arachnarok will weigh in at a hefty 290 points. So if you’re playing 2400 point games why not take two?! The flinger upgrade is only 30 points and the Catchweb Spidershrine only 40.

The bog-standard 290 pointer hits home with 16 attacks on a 100mm frontage. Eight of those are poisoned & strength 5!

For 320 points your added ‘flinger’ will enable you to shoot as a stone thrower with strength 1 (3) (even on the move!) from 12-48 inches, deluging your target in sticky webs that cause them to ‘Always Strike Last’ next turn (not so great against High Elvsies, but will put a damper on just about everyone else!)

For just 10 more points, the added shrine will give your Great Shaman the ‘Loremaster’ special rule.

If you consider that the upgrades are in addition to the basic attacks and then add the thunderstomp as a final flourish you can rest assured that the Orc & Goblin Army has just joined the big league…..quite literally!

Without doubt a high scoring delivery from GW with an overall web-tastic 9 stars! Only (maybe harshly) reduced from the maximum by the problems arising from a poor set of instructions.