Welcome back to our weekly Vanguard update! This week reveals many cards from Vanguard and Deletor (including several reprints) along with the name of a new Aqua Force Stride from Commander of the Incessant Waves, Marine General of Heavenly Silk, Aristoteles!

As Vanguard and Deletor’s Royal Paladins all revolve around the classic unit, King of Knights, Alfred, it should come as no surprise that his reprint has now been confirmed! He will be printed as a single rare in the set, allowing easy access to the deck’s most important unit. The theme of the Comic Royal Paladins is that their abilities only work when you have an ‘Alfred’ vanguard, so both experienced and new players alike will surely welcome this reprint! The Revival Legion unit, King of Knights’ Vanguard, Ezzell, is also reprinted as a single rare in this set, enabling easy access to a full Legion line-up. Further, as they had previously only been printed as a revival legion, this set will introduce their matching legion art for the first time! Meanwhile, Flash Shield, Iseult is also receiving a Rare reprint in this set, enabling easy access to the old-style Perfect Guards. The final reprint this week for Royal Paladins is the draw trigger, Margal. One of the goals of Vanguard and Deletor is to be able to be used to create a full deck, and the easy accessibility of the main Grade 3 and the Perfect Guard will surely make this an attractive budget choice. 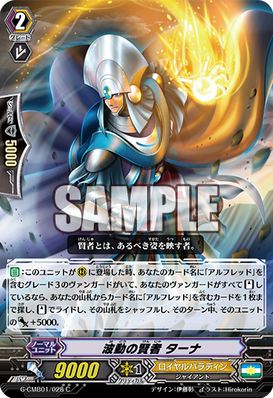 There are three new Royal Paladin units which have been revealed, and the first is Wave Sage, Thana (pictured). His ability is that, when he is placed as a rear-guard, if you have a Grade 3 vanguard with ‘Alfred’ in its name and all your vanguards are at stand, you can search your deck for up to one card with ‘Alfred’ in its card name, ride it, and grant it 5000 power for the turn. This ability seems rather odd at first – the deck seems best when it uses Alfred in Legion, yet Thana undoes that. However, Thana shines when he is used against the Deletor units that also come in this booster, being able to undo Delete for free. As a reminder, Delete turns your vanguard face down, removing its power and effects, but does not change its name or Grade – Thana therefore seems to mainly be useful in the context of this pack, but as a new Alfred unit is still a possibility, it is hard to be certain. Blaster Dark’s original form is released in this pack as Swordsman of Light, Yunos. He is a 7000 power Grade 1 who gains 5000 power when another unit is called through the effect of one of your cards, provided that your vanguard is an ‘Alfred’ unit. This enables him to serve as a 12000 attacker on the front row or to boost any 9000 unit to hit 21000 power. If he is combined with Swordsman of Light, Blaster Axe Guerard, they can hit 26000 combined, which is a very powerful column. It seems to me that Yunos will see a fair amount of play for his flexibility of use, making him a valuable addition to the deck. The final unit is Knight of Gale, Hudibras, a 6000 power Grade 1 with a pseudo-Intercept ability. At the beginning of the guard step of the battle that your vanguard with ‘Alfred’ in its name was attacked, you may discard a card from your hand to move him to the guardian circle at Rest, then give him an extra 10000 shield value. This can be a very useful skill, as you do not lose any shield value by calling him to boost – he even is able to avoid some ‘guard denying’ abilities, as he does not get called to the guardian circle, but rather moved there by an ability! He might not see the most play of the Grade 1s in this set, but players will certainly welcome having him as an option. 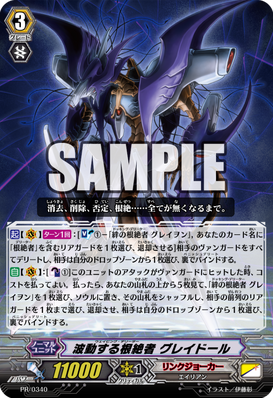 Waving Deletor, Greidoll (pictured) is designed to be the back-up Grade 3 to Docking Deletor, Greion, with a powerful skill. While Greion’s ability is strong, its hefty Counter Blast cost somewhat limits its late game – Greidoll can be used to mitigate this. Once per turn, you can Soul Blast a card named ‘Docking Deletor, Greion’ and retire a ‘Deletor’ rear-guard to Delete your opponent’s vanguards and force your opponent to Banish Delete a card from their Drop Zone. This is a very low cost for Deleting, and can be a viable alternative to Striding later on in the game. The second effect of Greidoll is that, when its attack hits a vanguard, you may Counter Blast 1 to search the top five cards of the deck for a ‘Docking Deletor, Greion’, put it into the soul, retire an opponent’s rear-guard in the front row, and force the opponent to Banish Delete a unit in their Drop Zone. This is a very strong ability, and provides a huge amount of pressure if their vanguard is Deleted. Counter Blast 1 is already good value to remove an opponent’s rear-guard, and the potential (however infrequent) to set up a future Delete of an opponent’s Vanguard is strong. Greidoll seems to be a great support unit for Greion, being both stronger and weaker in some regards, and so will certainly be sought after. 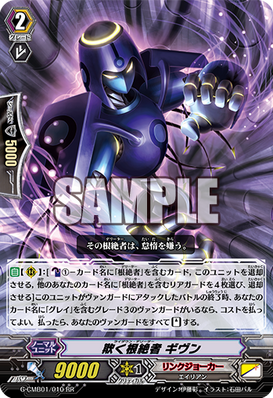 Liedown Deletor, Givun (pictured) is another hotly-anticipated card, although very situational in its use. At the end of the battle where it attacked a Vanguard, if you have a Grade 3 Vanguard with ‘Grei’ in its card name, you can stand all your Vanguards at the hefty cost of Counter Blasting 1 Deletor and retiring itself, along with four other Deletor rear-guards. This is not an ability which can be used often, as Deletors are already somewhat retire heavy, but can serve as a powerful finishing move. The strength of Givun is that all of the columns can attack before being retired, so, if the opponent’s Vanguard is Deleted, even relatively weak columns can force the opponent to spend large amounts of their resources guarding. Most players who run this card will only use two copies – it has a strong effect, but it is too situational to be useful for the majority of the game. Instill Deletor, Ender is the G Perfect Guard for the set, and it’s very impressive. Its bonus skill is not to Counter Charge, but rather to Delete an opponent’s vanguard at the end of the turn if their vanguard was deleted when it was used. This is a boost that Deletors definitely needed, granting them the ability to keep their opponent shut down merely by defending. Ender’s skill cannot be used against Stride units, but is still extremely useful – it punishes players who cannot Stride on the turn they were deleted, and is also a Deletor Perfect Guard, allowing it to be used for Counter Blasts when taken as damage.

Sprout Deletor, Luchi offers the deck a new Forerunner, with an ability which activates when it is retired as a cost for a Deletor vanguard’s ability. It may lock an opponent’s back-row rear-guard and force them to Banish Delete a card from their Drop Zone. This works really well with the ‘Grei’ cards, although many players will still value the ability to draw and Counter-Charge that Acquire Deletor, Igor offers. In addition, Ferment Deletor, Gaian offers ‘Grei’ more support. It is a Grade 1 with 7000 power that can, when an opponent’s vanguard becomes Deleted, Soul Blast 1 to gain 3000 power and Banish Delete a card of your opponent’s choice. This lets it easily boost for 10000, and works very well with the new Swift Deletor, Giari. Giari is a Grade 2 with 9000 power which, when it is placed on the vanguard circle or a rear-guard circle,  can retire a Deletor rear-guard to retire an opponent’s front row rear-guard, Banish Delete an opponent’s card from their Drop Zone and gain 2000 power until the end of the turn. This is an exchange with slightly favours you, and so will be used in quite a few decks.

Finally, Illfate Deletor, Dorohn has been revealed. It is a 7000 power Grade 1 with a useful cycling ability – at the end of the battle it boosted a Deletor vanguard, you can discard a card and move it into the soul in order to draw two cards and force the opponent to Banish Delete a card from their Drop Zone. This can be very helpful to add consistency to the deck, and so will see a fair amount of play. 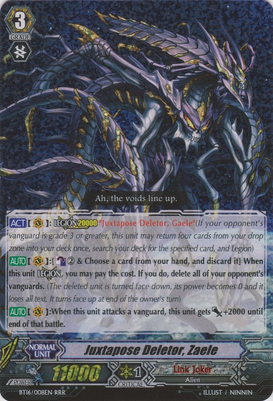 Deletor receive a fair few reprints in this set. Juxtapose Deletor, Zaele (pictured) is being re-released along with its mate, Juxtapose Deletor, Gaele. Of these, it seems Gaele will be the most sought after, considering that it can lock an opponent’s front row unit for free if their vanguard is Deleted. Clipping Deletor, Evo was previously exclusively a promo card, and is re-released in this set. At Counter Blast 2, it can call any Deletor from the deck, provided the opponent’s vanguard is Deleted. This is somewhat expensive and competes for the valuable resource of Counter Blast; however, given that Deletors retire their own units for their costs, Evo can be very useful to continue fuelling these skills. Greedy Deletor, Jail will be welcomed for its ability to Counter Charge on hit, helping to mitigate the heavy costs in the deck. Meanwhile, Looting Deletor, Gunec offers a sensible retire-target as, when it is placed on a rear-guard circle, you can Soul Blast 2 to draw a card. Idolizing Deletor, Guim offers a strong dedicated booster, being able to lock front-row units when the attack it boosted hits, while Penetrate Deletor, Iggy offers the same sort of skill as a dedicated Grade 3 rear-guard. Overall, the Deletor reprints are somewhat of a mixed bag – some will certainly be found very useful, while others seem to have been reprinted simply because they were promo cards.