Welcome back to our weekly Vanguard update! This week sees five new cards for Royal Paladins released, including a new Stride unit, while two new Deletors have been revealed. Further, a new card has been released which hints that the upcoming Blue Storm Dragon, Maelstrom might be a Breakride, while the first card in Fighter’s Collection 2015 Winter has been revealed! 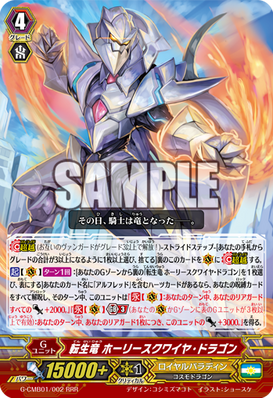 Reincarnation Dragon, Holy Squire Dragon (pictured) is the new Stride for Alfred’s Royal Paladins. Holy Squire Dragon requires an Alfred heart card, but is very useful in the context of the Vanguard and Deletor set. By G-Persona Blasting a copy of himself, you unlock all of your locked cards, then gain two continuous skills: the first grants all your rear-guards 2000 power, while the second skill is available at Generation Break 3, granting Holy Squire 3000 power for every rear-guard you control. This means that, if he is used as your second Stride of the game, you will be able to use all of his effects. The unlocking skill is only useful in Link Joker matches, and the need for an Alfred heart means that this cannot be used as a tech choice for other decks. The second skill is primarily useful for unboosted Grade 2s, making 9000 power units 11000 without overly much effort. This skill grants 4000 power to columns, but it does not really help most columns reach 21000 without the use of 10000 power or 8000 power units, or units which can gain at least 1000 power with their skills (such as Knight of Fragment). The third skill allows it to gain power in a similar way to Holy Dragon, Saint Blow Dragon, although it does not gain an extra critical – this is balanced out by the increased pressure it grants to rear-guard columns, although most players will prefer Saint Blow as it can be used in many more decks than this. Two more Alfred-specific cards have been revealed: Signpost Sage, Eluron and Spinning Sage, Berck. Eluron is a new forerunner whose skill can be used when you have an ‘Alfred’ Vanguard. By Counter Blasting 1 and moving him into the Soul, you can search your deck for any Grade 2 or less unit and call it. This is a very useful and flexible effect, allowing you to call units such as Knight of Twin Sword to gain more rear-guards, or Blaster Blade, Blaster Blade Spirit, or Blaster Blade Seeker (If using Alfred Exiv) to remove your opponent’s vital units. Spinning Sage, Berck, on the other hand, is more restricted in its use. For a Soul Blast and a Counter Blast, if you have an ‘Alfred’ vanguard, you may unlock up to two of your units, then give up to two of your units 2000 power. Berck had the potential to be excellent, but sadly is too restricted to see much play. Outside of the Link Joker match-up, there are no targets to be unlocked – the Alfred restriction limits it from being used in Broken Heart Jewel Knight, Ashlei ‘Яeverse’ decks, where it would be more useful. As such, the only reliable use for the skill is to grant 2000 power to up to two units, but this is not worth the cost. As such, Berck will probably only be used in the context of Vanguard and Deletor matches. 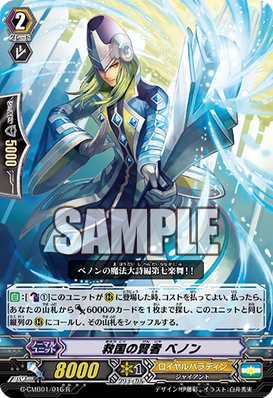 Salvation Sage, Benon (pictured) is also released in Vanguard and Deletor, but he is not restricted to Alfred decks. His skill costs Counter Blast 1 and allows you to call a 6000 power unit from your deck, so players might like to call Hidden Sage, Miron or Sword of Hope, Richard to draw a card. The drawback, of course, is the low power units which you are forced to use, substantially lowering your offensive presence unless skills are used to increase their strength. In other news, Jewel Knights receive a new forerunner in Jewel Knight, Raisegal. This 5000 power unit can give a unit called from the deck (once per turn) 3000 power, provided that you have three or more other rear-guards with ‘Jewel Knight’ in their names. This is less restricted than it seems, requiring only two other Jewel Knights at the time of call. Raisegal works very well in conjunction with Banding Jewel Knight, Miranda when used in an Ashlei deck, allowing Miranda to hit 21000 (with a 7000 power boost) when called from the deck. You can also use it with Fellowship Jewel Knight, Tracie if you are not using an Ashlei build. 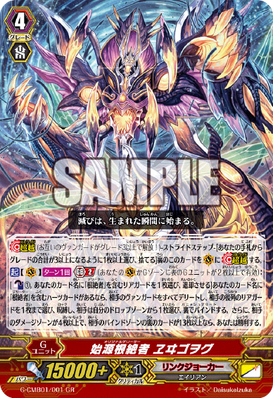 Original Deletor, Eigorg (pictured) is the new Deletor Stride, and offers Link Joker their second unique alternate win condition. At Generation Break 2, if you have a ‘Deletor’ Heart, you can Counter Blast 1 and retire a Deletor to Delete all of your opponent’s vanguards, lock up to one card in their back row, then force your opponent to Banish Delete a card. Then, if the number of cards in your opponent’s Damage Zone is four or more and the number of cards face-down in their Bind Zone is 13 or more, you win the game. This is a very strong card: its first effect is great value, as retiring a unit and Counter Blast 1 for a Delete and a Lock is cheap. The win-condition effect serves as a nice bonus – it seems feasible to pull off in a game, but equally does require work to actually use, as most cards can only Banish Delete a single card each use. As such, Eigorg is useful throughout the whole game – he can delete efficiently throughout the game, and keeping a copy in reserve for late game in case you can fulfil the alternate win condition is a good idea. Biting Deletor, Girba is a new critical trigger which, after boosting and if your opponent’s vanguard is Deleted, can return to the top of the deck to Counter Charge 1 and force your opponent to Banish Delete a card. This can help to push for winning through Eigorg’s effect, or simply to provide more resources so that you can Delete more often. Losing 10000 shield is somewhat bad, but considering that Deleting reduces the opponent’s offensive capabilities, it is not overly costly. 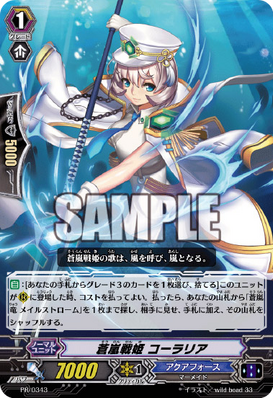 Blue Storm Battle Princess, Choralia (pictured) is a new promo card for Aqua Force. When she is placed on a rear-guard circle, you can discard a Grade 3 card to search your deck for up to one card named ‘Blue Storm Dragon, Maelstrom‘ and add it to your hand. As this effect is similar to Eternal Bringer Griffin (who searches for Dragonic Overlord, later given a Break Ride), people have inferred by analogy that Blue Storm Dragon, Maelstom will be reprinted with a new Break Ride effect, especially given their upcoming Clan Booster. If so, Choralia will make it significantly easier for Maelstrom decks to set up the Cross Ride, while also potentially enabling the Break Ride to be combined with it (provided that the speculation is true). Another promo card has been revealed for Pale Moon in Daydream Tone, Arny, a 9000 power Grade 2 with the Generation Break 1 skill to Counter Charge 2 on hitting a vanguard. Pale Moon have long been one of the heaviest users of Counter Blasts, so this will be a very welcome addition to the clan! In other news, Fighter’s Collection 2015 Winter has had some information revealed about it. The first card confirmed is a reprint of Twinkle Happiness☆Pacifica, a Japanese Promo. This version will come with different art, and also has led some people to suspect that the set will once more be Stride-focussed. There are going to be 48 cards in the set, possibly showing that each clan will receive two new cards: a banner seems to depict a Seal Dragon, an Angel Feather similar to Nociel, a new form of Interdimensional Dragon, Chronoscommand Dragon, Lord of the Seven Seas, Nightmist and Beast Deity, Ethics Buster. This focus on existing Grade 3 units does hint that they might become G-units, especially considering that Beast Deity, Ethics Buster already has three Grade 3 forms. Though the fact that Nightmist’s only grade 3 form is a break ride there is a chance that this new form could be a cross ride for him.Finally, it seems that in the new series of Cardfight!! Vanguard G: GIRS Crisis, members from the original cast will return, so we should expect to see Leon Soryu, Naoki, Miwa, Ren and Kai. The new series will focus on a quest called “G Quest” where Chrono will strive to become a Clan Leader. The season also introduces the idol group Rummy Labyrinth. This is a duo of Luna Yumizuki (a Pale Moon user who will be featured on the Trial Deck) and Am Chouno (a Granblue user whose Trial Deck will also soon be released). This implies that we might see a lot more of those two clans in booster packs when the next series airs.