Welcome back to our weekly Vanguard update! This week mostly consists of cards for the upcoming Clan Booster 2: Commander of the Incessant Waves so we will be seeing a lot of new Aqua Force units. 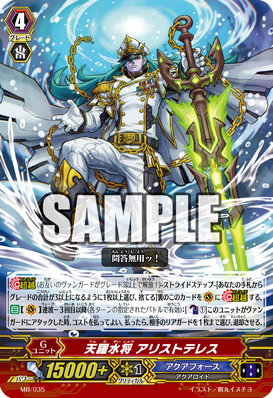 One card that we have heard about before is Marine General of Heavenly Silk, Aristoteles, and now the skill has finally been revealed! If it is the third battle or more of that turn, you can Counter Blast 1 to retire one of your opponent’s rear-guards. This is a really useful G-unit to snipe your opponent’s best rear-guards on your first Stride, and the attack doesn’t have to hit unlike Marine General of the Heavenly Scales, Tidal Bore Dragon. I’m sure people will find the true worth of this card when they are up against units like Commander Laurel and Doreen the Thruster. We also get a new Forerunner for the Clan that works with Thavas. Kelpie Rider, Mitolos gives you an extra attack by going into the soul when your grade 3 or greater Vanguard with “Thavas” in it’s name attacks on the third turn or more. You can then search your deck for a grade 3 with “Thavas” in it’s name, and call it to a rear-guard circle. At the end of that turn you may put the card you called into your hand, this will allow you to be able to stride next turn. Also if you stride with the new Thavas G-unit (Skill yet to be revealed) then you will be able to ride Thavas next turn if you didn’t have him as your Vanguard, but of course this will only be really helpful if the Thavas Stride does not require a Thavas Heart for its skill.

Wave Hunt Sailor is a new card that will help you refresh the Damage Zone and Soul, many Clans have had a similar card to this but this card isn’t restricted by a Generation Break. When her attack hits, if it is the third battle or more, you may Counter Charge 1 and Soul Charge 1. Aqua Force don’t Counter Blast overly much apart from Blue Wave Dragon, Tetra-drive Dragon, but the Soul Charge would help a lot for High Tide Sniper to dish out those +10k attacks. Another card the Soul Charge might help with is Mission Messenger Gull Soldier who has two useful abilities. Gull Soldier helps in both attack and defence, with a Generation Break 1 if it’s the forth battle or more that he boosted you may put him back into your hand to help you prepare for your opponent’s next turn. His second ability allows you to Soul Blast 1 when he is placed on a rear-guard circle to give another unit +3k. This small boost can go a long way for Aqua Force. For example, it can give Storm Rider, Basil the advantage by letting him attack for 12k which could make him more viable than Storm Rider, Diamantes so you don’t have to use up valuable Grade 3 space. Battle Siren, Mallika and Wave Hunt Sailor are going to help Gull Soldier a lot by keeping the Soul topped up. 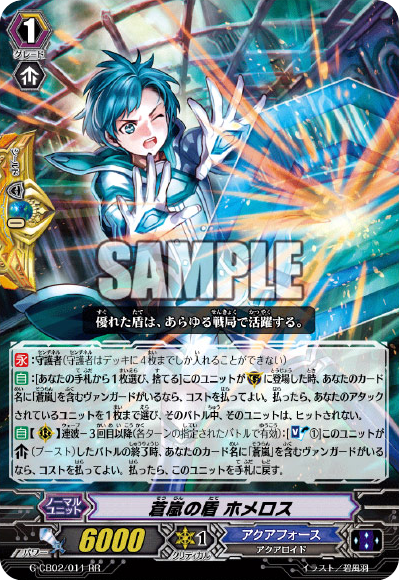 One card that a lot of people are excited about is the new Perfect Guard for Aqua Force’s Blue Storm subclan. Blue Storm Shield, Homeros‘ first skill works a lot like the old Perfect Guards by not being able to Counter Charge but allowing you to guard any unit, but Homeros will only be able to Perfect Guard if you have a “Blue Storm” Vanguard. To make up for this limitation he has a second ability which works on the rear-guard circle. If it is the third battle or more that this unit boosted, you may Soul Blast 1 and return this unit to your hand as long as you have a “Blue Storm” Vanguard. This will allow you to dish out boosted attacks while still having a Perfect Guard in your hand at the end of the turn. Yet another unit that will be using the Soul is Marine General of the Sound Speed, Nectarios. With a Soul Blast of 1 on the first or second battle, this unit gets +2k and then you can search the top four cards of your deck for a unit with the “Wave” ability, call it on top of this card, and then put Nectarios to the bottom of the deck. Some people may use this instead of Couple Dagger Sailor for it’s slightly more flexible ability, though you could use both in the same column to have that column attack three times! Great if your Vanguard is Blue Storm Dragon, Maelstrom or Blue Storm Karma Dragon, Maelstrom “Яeverse”. 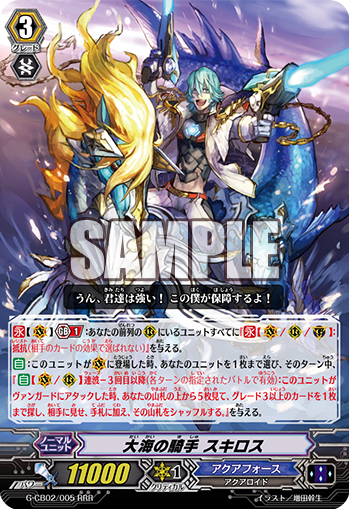 Two new Grade 3s for Aqua Force have been revealed for this set. One being Ocean Horseman, Skiros, the first RRR to be shown for this set. This card has a Generation Break 1 that gives the whole front row the “Resist” ability (Meaning that they can’t be chosen by your opponent’s effects) when he is on the vanguard circle. This ability will cause Clans like Kagero and Narukami to have trouble taking out your strong front row units. His second ability works on the vanguard and rear-guard circles, when he attacks a Vanguard he allows you to check the top five cards of your deck for a Grade 3 or greater and add it to your hand. The second ability needs to be the third turn or more but does not require any Generation Break so you can use it early on to prepare for Stride or, if your main Grade 3 is another unit, to have a better chance of finding the Grade 3 you want. I’m sure many Thavas users will be happy to have this as their backup Grade 3. The second Grade 3 is Titan of the Trench Patrol and is a Grade 3 version of Nectarios by allowing you to Soul Blast 1 to gain 2k and at the end of battle, look at the top  four cards of the deck, search for one with the “Wave” ability, call it over this unit and put this unit to the bottom of your deck. This unit will at least allow you to hit Cross Ride units without a boost but nowadays not many people will be using Cross Ride units. 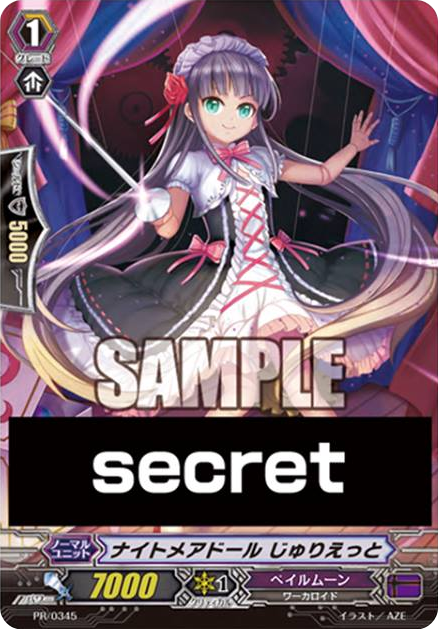 On a less Aqua Force-y note, an image for a Pale Moon promo has been revealed. Nightmare Doll, Julieta’s skill is currently a mystery but it will be great to see more of the Nightmare Dolls that have been around since Pale Moon started. This is also the first Nightmare Doll to be shown that isn’t a Grade 3. I feel there is a good chance that this could follow Nightmare Doll, Catherine’s footsteps in supporting the old Nightmare Doll, Alice.