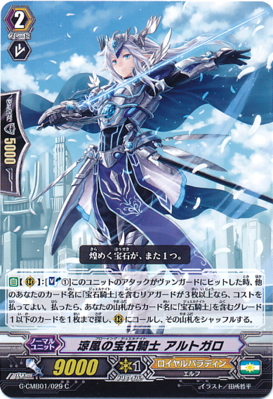 Flowing Jewel Knight, Altgallo (pictured) offers Jewel Knights an alternative unit to Jewel Knight, Swordmy. When its attack hits a vanguard while the number of your other rear-guards with ‘Jewel Knight’ in their names is three or more, you can Soul Blast 1 to call one Grade 1 or less Jewel Knight from your deck. This is a low cost to gain a unit, but is unreliable in the fact that it can only call your fifth unit and, further, that it needs to hit to do so. While this adds a strong on-hit pressure, and most likely will force guards, it seems unlikely to contest the niche that Swordmy occupies; the ability to Counter Blast 1 on-call to call a Grade 1 Jewel Knight from the deck is both reliable and powerful, to the extent that it is even used outside of the sub-clan. It is hard to see Altgallo see much play except as a budget replacement or if Swordmy becomes banned or restricted – Altgallo is by no means a bad card, but Swordmy does the same job better. Meanwhile, Packgal is a new Grade 1 unit with 5000 power, with the ability to Soul Blast 2 to Counter Charge 2. This effect has been seen in many other clans, and is always a nice option to have, especially for Sanctuary Guard decks and those which have heavy Counter Blast costs. As a High Beast, Packgal can be called by the effect of Swordsman of Light, Blaster Javelin Larousse (released in the same set), who also happens to place two cards into the Soul for the cost for his effect. Packgal certainly won’t find a place in every deck, but will be a card worth considering if Counter Charging is needed. Finally, they receive three new ‘vanilla’ triggers in Player of the Flash, Niviana (heal), Hot Sand Knight, Rudford (stand) and Pirrolo (critical). 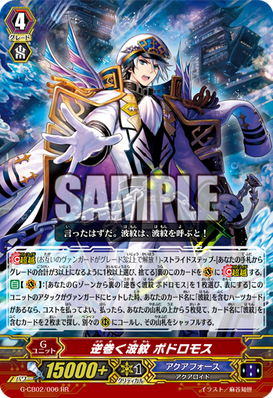 Aqua Force’s ‘Ripple’ sub-clan receives more support this week, gaining three new units. Torrential Ripple, Podromos (pictured) can G-Persona Blast when he hits a vanguard (while having a Heart card with ‘Ripple’ in the name) to look at five cards from the top of the deck, search for up to two cards with ‘Ripple’ in their name from amongst them and call them to separate rear-guard circles. The ability to gain two more cards with no real cost is very good, even if the attack does need to hit for the ability to work. With the new Legion pair of Breaking Ripple , Militiades and Thundering Ripple, Genovious, having ‘Ripple’ heart cards is easy to achieve too, and Podromos offers a good Stride unit while waiting to fulfil Genovious’ Persona Blast. This is helped by the new critical trigger, Demise Ripple, Orest. At the end of the battle that it boosted, if the number of other rested units with ‘Ripple’ in the name is two or more, you can look at five cards from the top of the deck, search for one ‘Ripple’ from among them, reveal it to your opponent and add it to your hand. This is intended to help set up the Persona Blast of Genovious, but adds a great amount of consistency to the deck besides. If Ripples receive their own Perfect Guard, this card will be one of the greatest consistency tools in their arsenal. The final ‘Ripple’ revealed is Turbulent Ripple, Lavisse, a 9000 power Grade 2 who can gain 3000 power when he attacks if the number of rested units with ‘Ripple’ in their names are two or more. This effect is good, if not exciting, but as there are only two Grade 2 ‘Ripple’ units at the moment, he will surely see much play in the deck. 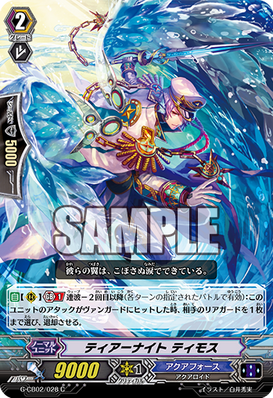 Tear Knight, Timos (pictured) adds a new control aspect to the clan: at Generation Break 1 and Wave 2, when his attack hits a vanguard, you may choose up to one of your opponent’s rear-guards and retire it. This is a newer version of Tear Knight, Valeria, who has a similar ability, albeit at what we would now call ‘Wave 4’. The benefit of Timos is that his effect is a lot easier to activate than Valeria’s, however it is limited to much later in the game – Valeria can activate on the vanguard circle and, with a good start, retire an opponent’s rear-guard on the player’s second turn. These effects are good, but they struggle to find a home in Aqua Force. Aqua Force rely on their Grade 2 units to activate their higher Wave abilities, using cards like Magnum Assault, Tidal Assault or Couple Dagger Sailor to chain multiple attacks, or units such as High Tide Sniper to guarantee that they can threaten the vanguard even when un-boosted. As such, the Grade 2 space is often quite tight in the deck, so, even if this skill is nice, there simply won’t be room for it in the majority of decks. Cobalt Neon Dragon, an 11000 power Grade 3, is the last card revealed for Aqua Force this week. His skill activates as either the vanguard or the rear-guard at Wave 2, granting him 2000 power when your other unit attacks. This can be nice when brought out from the back row (potentially by the effect of Couple Dagger Sailor), but ultimately there are better options for back-up Grade 3s. 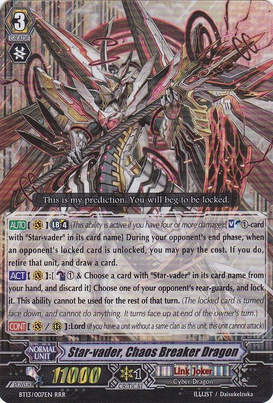 Star-vader, Chaos Breaker Dragon (pictured) receives some new support in G-BT05. Confusion Star-vader, Zinc is a 7000 power Grade 1 with a very useful ability. If you have a vanguard with ‘Chaos’ in its name and your opponent has a locked card, you can put her into your soul to Counter Charge 2 and Soul Charge 2. This helps to fund all of his skills, while also providing for rear-guards which can lock. He receives further support in what is presumed to be a Stride unit Death Star-vader, Chaos Universe, whose effects are yet to be revealed. Gear Chronicle have had two new units revealed  – Steam Maiden, Dah-nish and Metalglider Dragon. Dah-nish is a 7000 power Grade 1 that will come in the next Gear Chronicle Trial Deck with a Generation Break 1 skill. When she is placed on a rear-guard circle, you choose one of your opponent’s rear-guards, return it to the deck, then your opponent may choose to call a unit from the deck which is a single Grade less than that unit, and shuffle the deck. As this is free, it is an easy piece of disruption that can serve as a retire (on Grade 0s or Grade 1s, provided your opponent does not which to call a unit) or strip the deck of triggers (with Grade 1s). It can also power up units like Brass-Winged Gear Hawk, and so can be quite useful. Metalglider Dragon is an 11000 power Grade 3 also with a Generation Break 1 ability. When it is placed on either a vanguard or rear-guard circle, you can Counter Blast 1 to place an opponent’s Grade 1 or less unit on the bottom of the deck. This is a simple retire effect, and works well with units such as Interdimensional Dragon, Faterider Dragon. However, as Gear Chronicle like to use Grade 3s which are either Chronojet Dragon or can search for Chronojet Dragon, he might struggle to find a home in most decks. 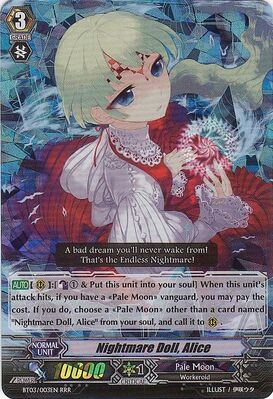 In other news, Pale Moon have had two new units revealed. The first, Moonlight Melody Tamer, Betty, is a 7000 power Grade 1 released in the upcoming Trial Deck. At Generation Break 1, you can Counter Blast 1 at the end of the battle she boosted a rear-guard to put the boosted unit into the Soul and call one card with the Magia ability out of the Soul. This is going to be a very reliable way for Pale Moon to gain more attacks, and also signals that Magia is most likely the keyword for being called from the Soul. Nightmare Doll, Catherine is a Grade 3 with 11000 power which is designed to make Nightmare Doll, Alice (pictured) more relevant in the current game. The ability to gain multiple attacks and to trigger Pale Moon effects is very useful, yet she is limited by her 10000 power, which is what Catherine fixes! Her CONT skill is to give all rear-guard Alices 1000 power and an ability which activates at the end of a battle that they attacked, but did not hit. For Counter Blast 1, they are then able to call a ‘Nightmare Doll, Alice’ from the Soul, then move themselves into the Soul. Owing to the current wording, this cannot be the same Alice as just attacked, meaning that players will need to run multiple copies to get the most out of Catherine’s effect. Catherine’s second effect activates when she is placed on the vanguard circle, allowing her to search her deck for a card, put it into the Soul, then shuffle the deck – this allows her to easily get copies of Alice where they are most useful. Cards like Purple Trapezist and Miracle of Luna Square, Clifford can help to recycle Alices who have moved into the Soul, allowing access to further attacks.

Oracle Think Tank gain new Tsukuyomi support in Handedly Housekeeper, a 7000 power Grade 1. Her ability allows her to pay Counter Blast 1 when placed on a rear-guard circle to search the top five cards of the deck for a ‘Tsukuyomi’ card from amongst them and add it to your hand, then to put the rest on the bottom of the deck in any order. This helps to ensure that the Ride-chain goes smoothly, while also contributing to the stack at the bottom of the deck.

Narukami receive a new 10000 power Grade 3 in Djinn of Twofold Striking. His ability activates on either the vanguard or rearguard circles, at Generation Break 1 and Thunder Strike 2. For a Soul Blast, he gains 2000 power and, when he attacks, you may choose an opponent’s vanguard and a rear-guard and battle both of them at once. This does not specify that you have to choose a front-row rear-guard, so it can attack the back row as well! Assuming that he receives a 7000 power boost, he forces 10000 shield against the vanguard and (if they have a 9000 power Grade 2, for example) 15000 for the rear-guard. However, as Narukami struggle with Soul Charging, it is likely that his skill will only be able to be used a couple of times per game, though it will be very powerful when it is used.

Finally, a few more potential Stride units have been revealed. We have already touched on Death Star-vader, Chaos Universe, but there also appears to be one for Narukami in Conquering Supreme Dragon, Dragonic Vanquisher ”VOLTAGE”, one for Pale Moon in Masked Divine Dragon Tamer, Harry and a new Susanoo called Dragon-defeating Battle Deity, Kamu Susanoo. All these units, along with Nightmare Doll, Catherine have been shown to be receiving sleeves in the next set.