Hello! I’m Simon and I will be today’s guest writer! You will usually find me lurking around the store, prodding customers and shouting table numbers out. So while James is busy swashbuckling pirates on the English Channel or calculating the trajectory ready for his personal voyage to Mars (He’s a part time rocket scientist ya know), I’ll take you through this week’s latest Cardfight Vanguard spoilers and syphon off some of my incredible knowledge for you to gleam. And by incredible knowledge I mean my complete lack of understanding of any Clan other than Link Joker. So, onwards, to the cards! 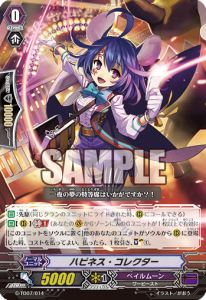 about Happiness Collector, the new Forerunner from Pale Moon’s first ever Trial Deck, G-TD07 Illusionist of the Crescent Moon (I started with a Forerunner, get it?). Her ability, with a GB1 condition, is to place her into the soul when another unit enters RG and in return you Soul Charge 1 and draw a card. Now that is good value from a Forerunner. Happiness Collector could potentially be a recurring source of draw by doing some Soul juggling (See what I did there?) and because there’s no CB/SB cost involved, it’s practically free! Hopefully the next Pale Moon card that pulls units out of the soul won’t be too Magia keyword specific but only time will tell there.

The Pale Moon TD also brings a beautiful delight in the form of a new Stride unit, Ardor Dragon Master, Amanda. Her sole ability (I’ll stop now) is an on-hit, Soul Charge 1, bounce any unit out of the Soul, give it +2k power and then return it whence it came at the end of 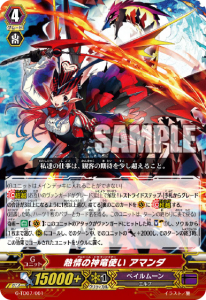 turn. Immediately I’m drawing a comparison to Miracle of Luna Square, Clifford which was the PM Stride from FC2015. Both units have a very similar ability but with enough differences to justify either inclusion in a deck. Amanda has the unique ‘Magia’ keyword which until we see more units utilising it will be difficult to judge so we’ll have to compare the rest of the ablity for now. She Soul Charges 1, Clifford doesn’t, and indiscriminate charging can be mixed in a PM deck. You can then call any unit, Clifford can only call G2 or lower, so she wins there. Then the unit has to be returned, whilst Clifford lets it stay out and play. Again this is a mixed point because some units want to stay on the field, others would benefit from being called out repeatedly. With all that in mind, I’m in favour of Amanda over Clifford but it really does depend on the deck’s construction and your preferences.

Let’s leave the Dark Zone to its tricks though and cast our eyes out over calm seas to Magallanica. Too calm. I sense a storm is approaching! Yes that was a torturous introduction to the new G-CB02 Commander of the Incessant Waves spoilers but we got there in the end. 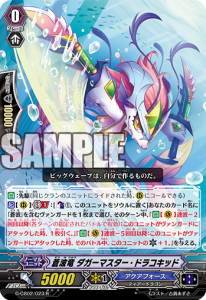 First unit that comes in to view is Blue Wave Dragon, Dagger Master Dracokid, a new Forerunner for that makes anyone planning on playing Blue Waves go weak at the knees. Rather then reiterate, I’ll drop the rules text in and let you revel in the majesty. [ACT](RC) Generation Break 1:[Counter Blast (1) & Put this unit into your soul] Choose one of your vanguards with “Blue Wave” in its card name, until end of turn, it gets “[AUTO](VC)Wave-2nd time or more:When this unit attacks a vanguard, draw a card.” and “[AUTO](VC)Wave-5th time or more:When this unit attacks a vanguard, this unit gets [Critical]+1 until end of that battle.”.

“I heard you like restanding your Vanguard, oh, but you want to be rewarded for restanding them? Well sure, draw a card and then next time have an extra Crit, its on the house!” Ok so I may be bigging Mr Dagger Master up a little but he is a great supporter for a blowout turn, not only netting you cards but also forcing your opponent to seriously consider which attacks to guard or not. Some players will argue the +1 Crit at the end is redundant, but is it? This could cause your opponent to actually let early swings through, as Crit Triggers are not guaranteed, in order to keep PG’s lined up for that 5th swing. Either way I think this little Tear Dragon is something to watch out for and snipe away if you can.

Surfing up the Grades brings us to Battle Siren, Chloris, a G1 with an interesting pair of 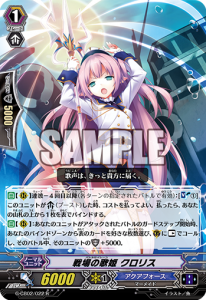 abilities. Her first one is on Wave-4th or more, Soul Blast 1 if she’s boosting to bind the top card of your deck face up. This is where it gets very interesting. At the beginning of a guard step where you’re attacked you can cast an inquisitive glance at the cards you’ve binded, maybe pensively touch a finger to your lips, venting over the tough predicament you’re in, then SNATCH THOSE BINDED CARDS UP AND SLAM THEM DOWN IN THE GC WITH +5K SHIELD! OH YES YOU CAN! Ahem. Sorry for that outburst. It’s just really awesome to see an alternative hand of sorts, something you can use to guard in a Clan known primarily for its aggression. Whilst your opponent will have total awareness of what’s happening and could potentially remove Chloris, causing you to lose those cards, the opportunity for that extra guarding is an intriguing one.

Following on from this, and its a tough few acts to follow, we have Blue Wave Soldier, Bright Shooter who is a simple supporter for Striding. His Wave-4th ability means after boosting, if you have a Blue Wave VG, choose a G3 from drop zone and slip it back in to hand. As I said, a simple supporter. This lets you get back anything you dropped for a Stride cost and at 7000 Power… Wait… He’s RR rarity? Oh. Ok. Let’s move on to the next card shall we? 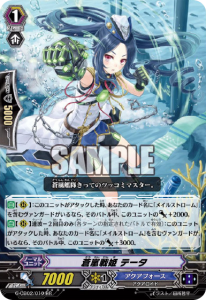 m Battle Princess, Theta, who is also a RR, is a G1 that with the proper setup can swing in with a hefty punch. So long as you have a Maelstrom VG she gets +2k in battle and then if Wave-2nd she gains another +3k, making her in total a 12k G1 hitter if you have Mael. Which isn’t terrible and combined with switchers and other various AqF shenanigans she could prove herself useful.

Let’s be honest though, those cards were just warm-up acts, they’re the bread to your sandwich, necessary parts of the whole but they’re not the reason you’re making an Aqua Force sandwich. Oh no. You’re here for the spreads, the main meat, the delicious filling that overpowers everything else. And we have an classing filling revealed this week but with a twist. I present to you… Blue Storm Dragon, Maelstrom (Break Ride)! Yes, he’s back, and this time he’s ready to be ridden! 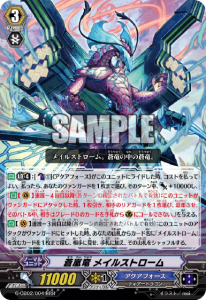 Drawn out analogies and terrible puns aside, the new Break Ride version of Maelstrom is making waves already (I couldn’t resist that one). My interpretation of his two abilities won’t do him just so I’ll copy them out below and you can devise delirious devastating turns in your own mind.

[AUTO] Limit Break 4:[Counter Blast (1)] When an <<Aqua Force>> rides this unit, you may pay the cost. If you do, choose one of your vanguards, until end of turn, that unit gets [Power]+10000, and “[AUTO](VC)Wave-4th time or more (This ability is active during the specified battles of each turn):When this unit attacks a vanguard, draw a card, choose one of your opponent’s rear-guards, retire it, and until end of that battle, your opponent cannot call grade 0 cards from hand to (GC).”

[AUTO](VC)Wave-3rd time or more (This ability is active during the specified battles of each turn):When this unit’s attack hits a vanguard, search your deck for up to one card with “Maelstrom” in its card name, reveal it to your opponent, put it into your hand, and shuffle your deck.

The end result of combining the new Break Ride with the Crossride is not only your opponent’s complete and utter inability to guard against your valorous attack, but they also lose a RG and you get to tutor out of your deck fodder ready for a Stride or to set up the same scenario again. That is just brutal. Do I need to say more?

Out there, on the horizon, that are other Grade 3’s then just the maj 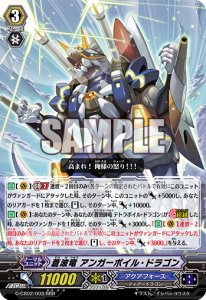 estic Maelstrom and GCB02 also brings AqF players Blue Wave Dragon, Anger-boil Dragon. Twin abilities show you his true aim, that of restanding your RG’s, primarily with the aid of striding a Tetra-boil Dragon (Yet to be revealed sadly, but he’ll be magnificent I’m sure). On GB2, Wave-2nd, if Anger-boil attacks a VG he gets a +5k boost then Stands a RG granting it a +10k power boost! That’s an amazing pump for no cost, although it will be a few turns in to the game at this point. Secondly if the afore mentioned Tetra-boil Strides, then a +3k boost is passed on and Wave-2nd allows two RG’s to Stand, albeit with just +3k boosts this time. A good ability but we really could do with seeing Tetra-boil before we pass too much judgement.

And with that my short time with you is at an end. This has been an enlightening experience for me, as my main protagonist is a lover of all things Aqua-ery and this I hope you’re enjoyed reading through my rant and you will be returned to your regular James-san broadcast next week!