Welcome back to this multi-part weekly card update for this week. In this part we will be talking about the Oracle Think Tank and Pale Moon units shown for G-BT05 as well as a special Fighter’s Collection card. 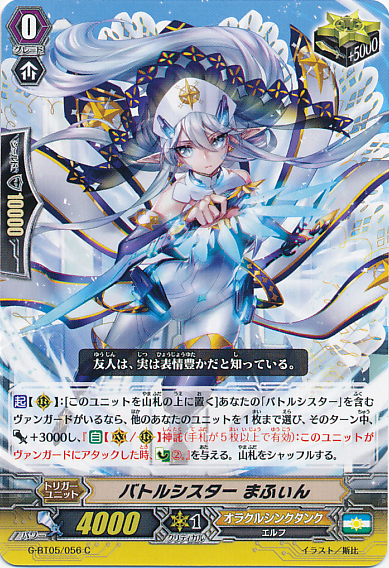 Battle Sister, Muffin is a new Critical Trigger that can be put back on top of the deck. If you do put her on the top of the deck and you have a Vanguard with “Battle Sister” in it’s name you can give another rear-guard +3000 and if you have five or more cards in your hand when the attack hits you can Counter Charge 2 which is really handy for Battle Sisters and their excessive Counter Blasting. Seeing as you only need a Battle Sister Vanguard you can give this ability to cards like Silent Tom to give you a better chance of hitting.

Susanoo has been given a little bit of support with the Critical Trigger, Divine Sword, Kusanagi. Kusanagi is a Heart Thump Worker clone where if your Vanguard with “Susanoo” in it’s name attacks you can put him into the soul to draw a card and give your Vanguard +5000 power. The power helps but the one draw isn’t amazing for OTT seeing as they draw a lot with their other skills anyway. Tankman Mode Interrupt  is another card that allows you to draw two cards when he is placed on a rear-guard circle by Counter Blasting 1. If you do you can either discard two cards from your hand or discard one card with the Oracle keyword. With only having 7k power and being a Grade 2 he doesn’t seem very good but he doesn’t have a Generation Break either so at least you can use him early on. 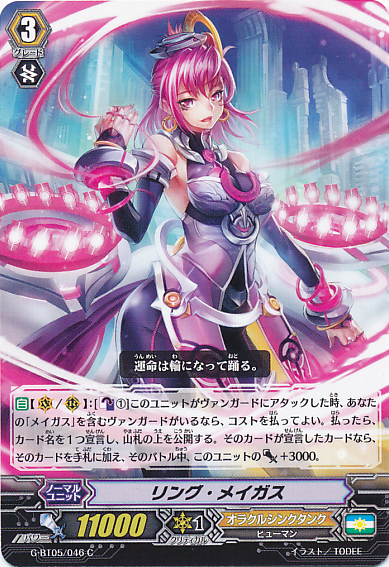 On to the Magus cards we have a new Grade 3, Ring Magus. When Ring Magus attacks a Vanguard you may Counter Blast 1 and predict a card, reveal the top card of your deck and if the card has the same name as you predicted then you put that card into your hand and Ring Magus gains +3000 power. Another Magus that helps with draws is the new forerunner, Semilunar Magus. You may predict the top card of your deck, if your prediction was correct you put her into the soul and draw two. As you may be able to tell the new Globe Magus stride works fantastically with these cards by being able to look at the top card whenever you wish.

Rhombus Magus with a simple 7k Grade 1 can make for some very strong columns. When she attacks and you have a Magus Vanguard you can do your usual Magus predictions and if you predicted correctly she gains +5000 power becoming a 14k Grade 2.

In the event that you run out of Counter Blasts, Cone Magus has you covered. When she is placed on rear-guard you can make a prediction and if it’s correct you can Counter Charge 2. This will help for the Counter Blasts that Ring Magus and Stellar Magus will be constantly using so it may be wise to run 3-4 of Cone Magus. 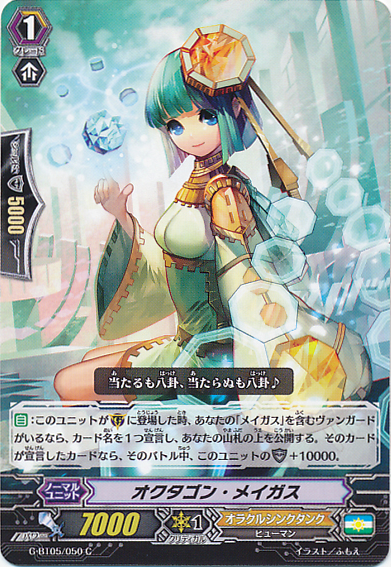 Magus also have defensive options with the help of Octagon Magus and the new vanilla draw trigger Triangle Magus. When Octagon Magus is placed on the guardian circle you can predict a card and if it was correct she gains +10000 shield. It’s nice to see a strong guard still with 7k power to make her more flexible with either attack or defence.

As far as Magus go I think they are really cool. When they first came out they didn’t have much to go by and they used up their Counter Blasts very quickly but with the help of these units and Globe Magus I think they will be used a lot more and will prove to be a very good sub clan.

Some more Legion hate comes in the form of the Cray Elemental, Earth Elemental, Dogats. He has a CONT on the rear-guard where it changes the cost of Legion-ing to make it so if you want to Legion you can only put Grade 2s or higher back into your deck, preventing you or you opponent from putting Triggers and Perfect Guards back into the deck. You’ll obviously be wanting to use this in a non-Legion deck and hope that you can screw up your opponent’s plans with it, plus he has 9000 power so he can still do some decent damage if your opponent isn’t using Legion. 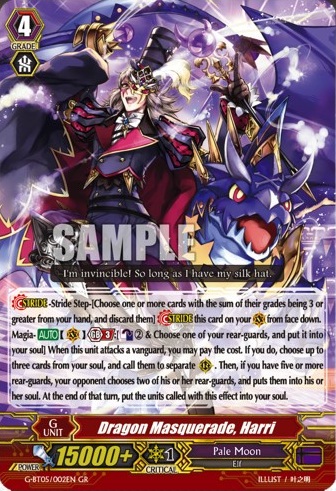 The new Harri stride for Pale Moon has made it’s grand entrance and is the second GR in this set. Dragon Masquerade, Harri has a GB3 though his skill is definitely worth it. When he attacks a Vanguard you may Counter Blast 2 and put one of your rear-guards into your soul, if you do you can choose three units in your soul to put onto the field and if you have five or more rear-guards then your opponent has to put two of their rear-guards into their soul, then at the end of the turn you must put the newly called units back into your soul. Putting two rear-guards into your opponents soul may give them some Soul Blast fuel (or if they’re Dark Irregulars, some extra power) but I think it’s well worth it in order to thin out their field. Darkside Princess would be a great card to bring out due to her power and she’s going to go back into the soul anyway so you may as well make it worth it. Flying Peryton would also be a good option to bring out if you still have an empty circle so you can use Harri to his full extent.

Masquerade Bunny is the stride fodder for Harri so when she’s placed on the rear-guard circle you may reveal a Grade 3 to search your deck for a Grade 3 Harri to put into you hand and then drop a card. Her other ability is when you discard her for stride she counts as a Grade 3. It’s a shame she’ll be used to be thrown away all the time, especially as she indicates that she will die if she feels lonely… 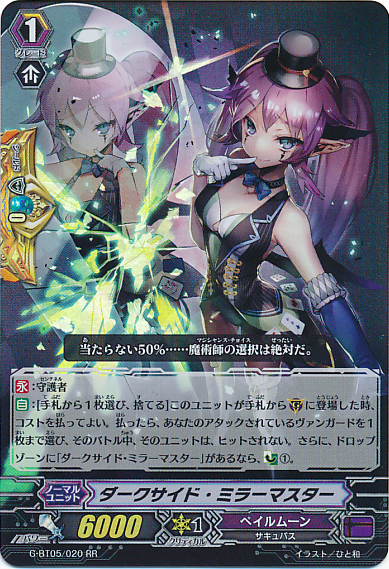 Harri also gets a very beautiful Perfect Guard G, Darkside Mirror Master, to unflip some of those Counter Blasts and a Heart Thump Worker clone, Darkside Sword Master, to go into the soul to give some extra power and a draw.

A nice little back-up Grade 3 for Harri is Beauteous Beast Tamer, Alexis. When Alexis’s attack hits a Vanguard you may Counter Blast 1 to Soul Charge 1 and choose a Grade 2 or less from your soul and call it to rear-guard. This does need a GB1 but the unit called doesn’t go back into the soul. This is also good as a last resort from trying to fill up your field for Dragon Masquerade, Harri but you would also be risking a lot relying on this card for that purpose.

Speaking of good back-up Grade 3s we also have Foolsmile Wyvern, a Grade 3 that works both on the Vanguard circle and rear-guard circle and doesn’t have a Generation Break. As an ACT you may Counter Blast 1 to use the Magia effect of bringing a card from the soul onto the field and then putting it back afterwards. This is a far more reliable option than Alexis but Foolsmile’s new unit will only be around for one turn. 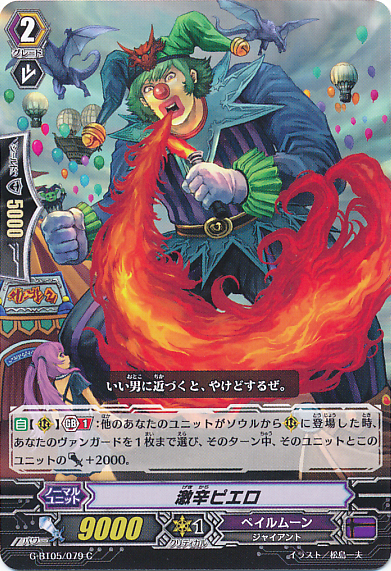 The clowns are back  with Spicy Clown and Intensely Sweet Clown but with GB1 abilities. When a unit is called from the soul onto a rear-guard circle Spicy Clown gives +2000 power to the Vanguard and himself. This is very similar to the ability shown by Nurse of Broken Heart from the previous set and can boost up your front row really well, especially if you have two Spicy Clowns. Intensely Sweet Clown gains +5000 power when placed on a rear-guard circle from the soul. I’m sure you can see how well these two units work together and how devastating each column could seem to your opponent.

A great Stand Trigger has been shown for Pale Moon. Mischievous Girl of the Mirrorland can be put on top of the deck when she would be put into the soul. If you do put her into the deck then you can search your deck for a card not named Mischievous Girl of the Mirrorland and put it into the soul. This can be good for a load of cards, especially  Darkside Princess, Upright Lion, and even Nightmare Doll, Alice.

Dreaming Bicorn is the new Forerunner for Pale Moon. When a unit is put into the soul you may also put this into the soul to give +3000 power to three rear-guards. Some people may decide to run this as their starter instead of Happiness Collector but I think they have their own place in different decks. For Dreaming Bicorn it may suit a Nightmare Doll deck better than a Harri deck to give those Alices a nice boost in power. 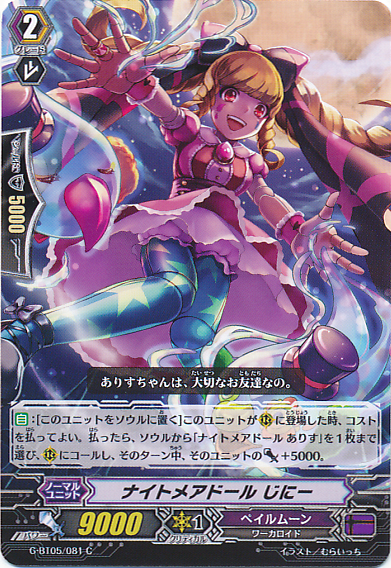 Speaking of Nightmare Dolls, they get a couple more direct support cards in this set to help out Catherine and Alice. The first one is Nightmare Doll, Ginny that, when she is placed on a rear-guard circle you may put her into the soul, if you do, you can call a Nightmare Doll, Alice from your soul onto the rear-guard circle and give her +5000 power until the end of the turn. This is why Michievous Girl of the Mirrorland is so good to give you a much better chance of getting Alice into the soul.

The second card for Alice and Catherine is Nightmare Doll, Leslie. When a Nightmare Doll, Alice is put onto the rear-guard circle from the soul you can stand up Leslie. This constant onslaught of Alice attacks will really pressure your opponent with the only downside being it takes up a lot Counter Blasts. Luckily Leslie and Ginny don’t take up any Counter Blasts but you will still have to be wise as to when you want to use the precious face-up damage. 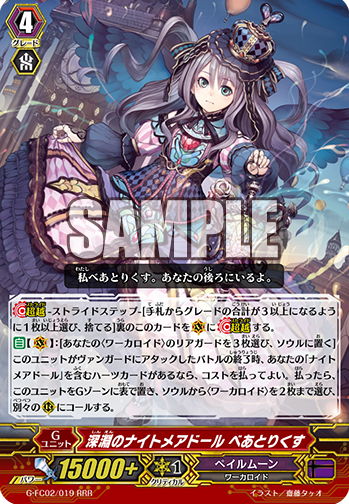 But wait! The Nightmare Doll support doesn’t end there. They have recently revealed a new stride unit for Nightmare Dolls to come out in the next Fighter’s Collection. Nightmare Doll of the Abyss, Beatrix allows you to choose three “Workeroid” (race) units to put into the soul after she’s attacked to then put Beatrix back into the G-Zone and call two Workeroid units from your soul to rear-guard. This only works if you have a Nightmare Doll heart but the flexibility of being able to call Workeroids means you won’t only be able to call out Nightmare Dolls but also cards like Jumping Jill, Nitro Juggler, Peek-a-boo, etc. This card is mostly useful for bringing out Alice and because Beatrix goes back to the G-Zone, if you have Catherine as your heart you can give Alice the +1000 power and skill that Catherine gives. A truly great stride for helping out the Nightmare Dolls.

Lastly we have a couple of Silver Thorns. Silver Thorn Magician, Colette Soul Charges one when they are placed on a rear-guard circle if you have a “Luquier” Vanguard, and if the Soul Charged unit was a “Silver Thorn” Colette also gains +3000 power for the turn. And the last unit is Silver Thorn Puppet Master, Euphemia who eliminates the Limit Break 4 restriction, which is a good way to get Silver Thorn Dragon Queen, Luquier “Яeverse” and Silver Thorn Dragon Empress, Venus Luquier using their skills a little earlier on. I would say Silver Thorn Dragon Tamer, Luquier as well but seeing as her skill costs a Counter Blast 3 it’s not going to make an overly big difference.

Well that’s it for the Oracle Think Tank and Pale Moon for G-BT05. Be sure to check part 3 where I will be talking about the all the Narukami units in the same set as well as a sweet Beast Deity stride that comes in Fighter’s Collection 2015 Winter.