Welcome back to this multi-part weekly card update for this week. In this part we will be talking about the Narukami units shown for G-BT05 as well as another special Fighter’s Collection card. 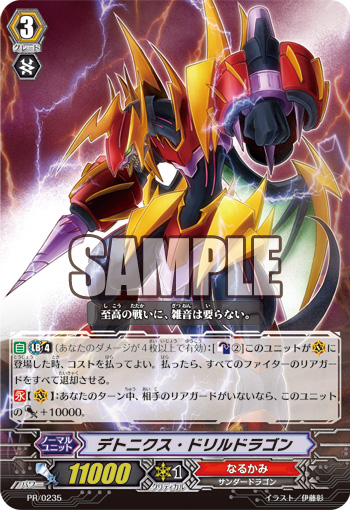 To start off we have been shown some interesting support for “Detonics”. For those of you who don’t know, Detonics Drill Dragon is currently a Japanese-only Grade 3 promo who retires all fighters’ rear-guards when he is placed on the Vanguard circle with a Counter Blast 2. To support this in G-BT05 there is a break ride named Detonics Stinger Dragon. With a Limit Break 4, when a Narukami rides Stinger Dragon, they get the usual +10000 power plus when your new Vanguard attacks a Vanguard you can Counter Blast 1 if your opponent has no rear-guards in the front row and if you do then your opponent cannot guard with Grade 1s, and if they have no units in the back row then your Vanguard gains an extra Critical. As you can see this works really well with Detonics Drill’s ability of retiring everything. You can also use this card with Armor Break Dragon but you wouldn’t get such a grand pay-off.

Another bit of Detonics support is Hammer Knuckle Dragon. If you have a Detonics Vanguard he gains +2000 power (Making him an 11k Grade 2) and he won’t be able to be retired due to skills. This allows you to still have rear-guards on the field after using Detonics Drill’s ability of retiring everything, giving more pressure to your opponent. It still seems off that they would give support to a promo like this, though maybe we will get the promo as a box topper in the next set. It’s wishful thinking but there’s still a chance. 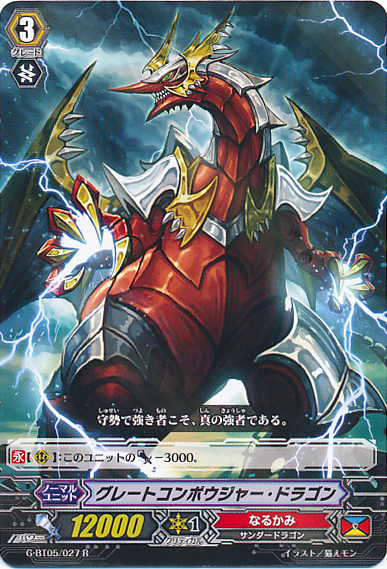 Another interesting card they put in this set is Great Composure Dragon. Originally a card only shown in the manga, Great Composure Dragon is simple yet effective. He is a 12k Grade 3 who loses 3000 power when on the rear-guard circle. This may not seem overly great but it will protect you against non-boosted rear-guards coming in for 11k while he’s a Vanguard and will really help against Aqua Force’s many but small attacks. Using Composure Dragon in a stride heavy deck will give you a good balance of attack and defence, that is if you want to choose this over Dragonic Vanquisher‘s on-stride skills.

Next up we have another card that was originally manga-only, Vortex Dragon‘s Narukami cousin, Recklessness Dragon. Recklessness Dragon’s skill is simple and sweet. As an ACT you may Soul Blast 1 to have him gain +1000 power. This won’t help you overly often but it can mean the difference between your opponent guarding with one card or two. 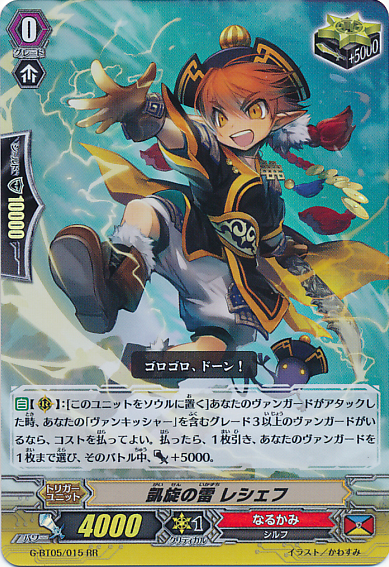 Vanquisher gets his Heart Thump Worker clone in this set with Triumph of Thunder, Reseph to give the extra power, soul, and draw.

If you don’t want to use Djinn of Twofold Striking as Vanquisher’s back-up Grade 3 then Blitz-spear Dragoon is always a good option. Unlike Djinn of Twofold Striking, Blitz-spear only works on the Vanguard circle, though when he is placed on the Vanguard circle you may Counter Blast 1 and Soul Blast 1 to retire and bind an opponent’s front row rear-guard. As well as that he also gains +2000 power for every rear-guard in your opponent’s bind zone when he attacks, making him a very strong unit in late game.

Desert Gunner, Koshin has a GB1 and Thunderstrike 2 which gives him +10000 shield when guarding. He’s your standard 8k power 15k shield interceptor but can also be used as a guard from hand as a little extra. 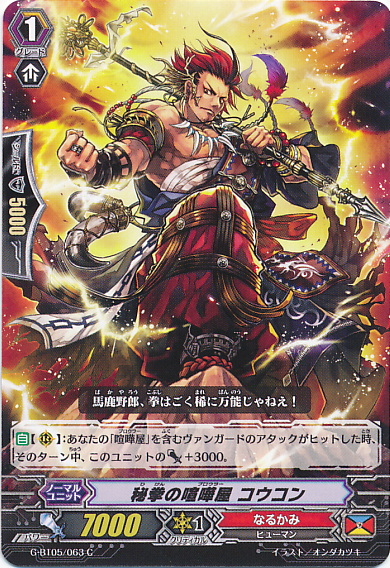 Now we also have a few more Brawlers all with very similar yet awesome abilities. The first up is the Grade 1, Secret Fist Brawler, Koukon. Koukon gains +3000 power for every time an attack from your Vanguard with “Brawler” in it’s name hits. This may not seem a lot at first but when you consider Big Bang Knuckle Turbo‘s skill of attacking all of your opponent’s units it can start adding up to +18000 power! That’s a crazy back row boost.

Brawler, Street Fight Dragon is a Critical Trigger that can go onto the top of the deck to give another unit the same skill as Koukon. Giving this to a 9k Grade 2 in front of Koukon will give you a great amount of power. 52k column anyone?

The final unit with this type of skill is the Grade 2, Manly Leg Brawler, Teiroku. You have to Counter Blast for Teiroku’s skill and your Vanguard has to be in Legion so no Big Bang Knuckle Turbo for this card, but he does gain 5000 power instead of 3000 so you can still get him up to +20k as well as the added benefit of him having Resist.

With the last of the Narukami we have the Eradicator Forerunner, Eradicator, Rare-talent Dracokid. If your Vanguard’s attack didn’t hit then you can put Rare-talent into your soul and Counter Blast 1 to give two units +5000 power. This is a nice little bonus if your opponent is on five damage so they guard your Vanguard only to discover they have to guard even more than expected for your rear-guards. 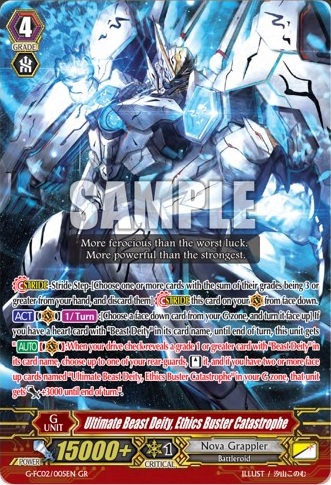 Well that’s it for the Narukami of G-BT05 and the Fighter’s Collection cards. Be sure to check part 4 where I will be talking about the new cards shown for G-TD06 Rallying Call of the Interdimensional Dragon.