Welcome back to our weekly Vanguard update! This week, we have news of some new Neo Nectar, Royal Paladin, Shadow Paladin, Genesis and Cray Elemental units, alongside some promotional reprints of Bermuda Triangle cards. 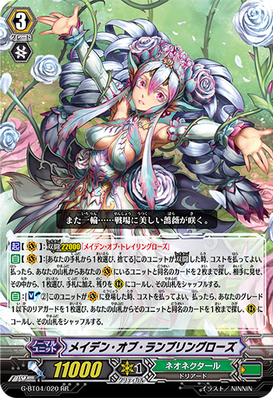 Neo Nectar’s mysterious boss monster has finally been revealed! Maiden of Rambling Rose Legions with Maiden of Trailing Rose, and compliments her skills very well. When she is placed on the vanguard circle, you may Soul Blast 2 to call a copy of a Grade 1 or less rear-guard. When she Legions, you may discard a card to search your deck for up to two cards with the same name as units on the vanguard circle, put one in the hand and call the other to a rear-guard circle. This allows the Persona Blast of Maiden of Trailing Rose to be used easily to create a consistent field, as well as easily granting an 11000 power attacker. Hollyhock Knight is a new Grade 1 which works perfectly with this card. If your vanguard is in Legion, he gains 2000 power for each rear-guard with the same name as a unit on the vanguard circle. This will be a base 9000 power boost with the effect of Rambling Rose, but can easily become an 11000 boost when used well. 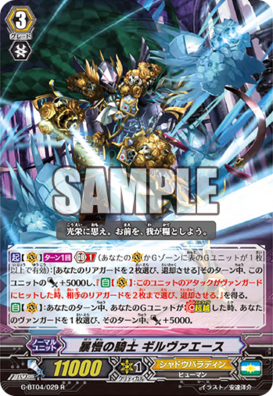 Knight of Inflation, Gilvers is a new Shadow Paladin vanguard. It seems to be intended as a back-up unit for Stride builds, having an on-Stride effect and a Generation Break 1 ability. When your unit Strides, you may choose one of your vanguards and grant it 5000 power. This has no cost, but is not exactly a game-breaking skill. Its active ability has the cost of choosing two of your rear-guards and retiring them, in order to gain 5000 power and retire two of the opponent’s rear-guards when its attack hits the vanguard. This is costly for the user, and seems unlikely to actually activate during a game, as most players will guard the attack. Using Promising Knight, David allows this card to be used for just one sacrifice, but it is rarely worth it. Most people will use this as their secondary vanguard, if they use it at all. In other news, Royal Paladins have had two new units revealed in the anime. Techgal is a Grade 2 with 8000 power which gives power to a unit in the same column when that unit attacks a vanguard, while Pier is a 7000 power Grade 1 that gives both units in its column 2000 power when a unit is called in front of it. This offers Royal Paladins some interesting options in having what amounts to an 8000 Grade 2 booster, which can be later be used as an interceptor if the unit in front of it retires, allowing powerful attacks without wasting shield value. This also solves the problem of mostly superior calling Grade 2s, at least this way we can easily power up the front row. The main issue with this is that it most likely count as a boost, meaning boosted skills like Knight of Twin Sword’s effect won’t activate if powered up by this card. Pier’s skill is still somewhat uncertain, but it seems that it can be used to create an easy 21000 power column when a 10000 power (or higher) unit is called in front of it. Pier can also work well with Knight of Refinement, Benizel, essentially giving Benizel +6000 power with both of their skills. 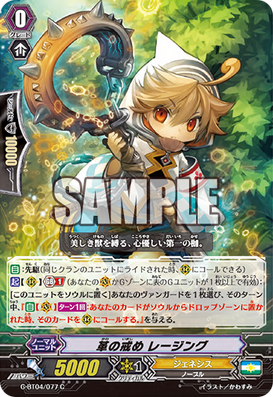 Leather Warning, Leyding is a new Genesis Forerunner. Its Generation Break 1 skill is to move into the soul, choose one of your vanguards, and give it the ability to call one card sent from the Drop Zone from the Soul that turn to a rear-guard circle. With this, any card can become a free Melissa, Chamomile or Cardamom, and allows the Soul to be used somewhat as a second hand. If a player needs a card such as Ordain Owl, but has Soul Charged it, Leyding allows it to be called to the field with ease. There is also the option of bringing Leyding back onto the field, making for a free soul blast of 1 every turn. Genesis players will enjoy using this card to create greater consistency in their deck. 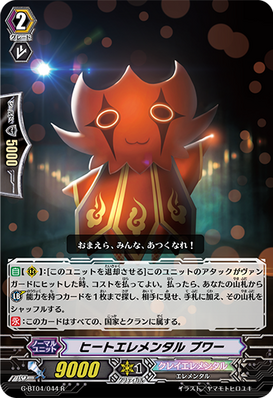 Heat Elemental, Buwer is not only adorable, but is very strong support for many cards. At the cost of retiring him when his attack hits a vanguard, you may search your deck for a card with Limit Break and add it to your hand. As a Cray Elemental, any Clan can use this card, allowing all sorts of decks to gain consistency. Cards with a Persona Blast requirement will enjoy easily gaining copies to discard, while decks reliant on Break Rides will be able to search them. Revenger, Raging Form Dragon will be able to Persona Ride with much more consistency. Bushiroad seem to be attempting to make old mechanics much more viable with Cray Elementals, and fans of older bosses will enjoy the strength granted by these cards. 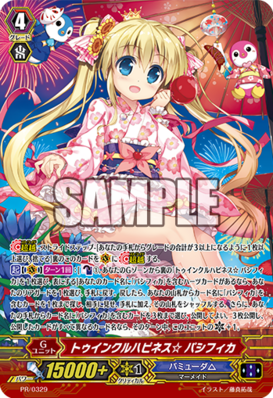 Bermuda Triangle have a series of reprints coming out soon, all of which are to be given out as promos. We will receive Bermuda Triangle Cadet, Shizuku; Duo Stage Storm, Iori; Aurora Star, Coral and Costume Idol, Alk. In other news, a new Stride promo has been revealed – Twinkle Happiness ☆Pacifica. At the cost of Counter Blast 1 and a G Persona Flip, if you have a heart card with Pacifica in its name, you can bounce a rear-guard to search your deck for a card with Pacifica it its name. Then, if you reveal three cards with Pacifica in their name, but they all have different names, this unit gains one critical until the end of the turn. This therefore is most powerful when run in a deck with all three Pacificas: Eternal Idol, Planet Idol and Top Idol. Many players, however, will consider Top Idol, Pacifica to be somewhat outdated, both having a Megablast skill and only 10000 power. Most of the time, therefore, this card will only really be able to search a card from the deck for use for continued Striding, but dedicated Pacifica builds will love this card.
That concludes this week’s card update, so check back again next Friday for more news!