This Clan Booster entirely consists of Bermuda Triangle units, and we receive support for all builds, either generic, Duo-based or PR♥ISM-based, while a few old bosses gain specific and powerful support.  This Clan Booster also officially introduces the Harmony keyword and the Counter Charge icon (

), which we should see on many cards in the future. When a card enters the same column as a unit with Harmony, both cards are deemed to be in that state, allowing both cards to use any effects which require that state. 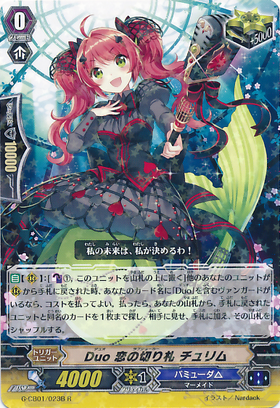 This set introduces two new Forerunners, both with Generation Break 1. Finger Magic, Mako has a simple effect to return to hand after boosting, which can add shield to hand, but it seems that First Lesson Akari will be the more interesting option. Akari is more cumbersome to use, as she needs to be in Harmony, but she can enter the soul, return another rear-guard to hand, then draw a card. This is an easily accessible ‘bounce’ effect and she replaces herself by drawing. Mako might be more consistent, but Akari will have a higher payoff. There are two exciting triggers in the set: Duo Love Joker, Chulym (pictured) and Dreamer Dreamer! Krk. Chulym will be a must for all Duo decks for her ability to clone Perfect Guards. When another unit is returned to the hand, she can counter blast one, return to the deck, and search a unit with the same name as the returned unit. This not only adds another critical trigger to the deck, but provides immense consistency by searching specific units needed. Dreamer Dreamer! Krk is a stand trigger and uses the Harmony effect. After boosting, she returns to the deck, returns another rear-guard to hand, and then can be used to superior call a card from hand. Clearly, this is, in itself, a cost of losing a card, but this can be recovered by the various effects triggered by ‘bouncing’ the unit. The idea with Krk is to use the ability to return units to hand to create multiple attacks, and the fact that she is a stand trigger further emphasises her aggressive role. As Bermuda Triangle are often built as a defensive deck, Krk’s primary use will be in builds whose higher Grade units lack enough ‘bounce’ effects, as most other builds will prefer to use trigger units for their shield value. 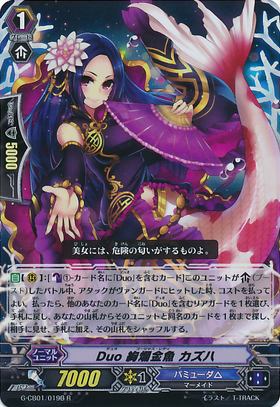 Duo Gorgeous Lady, Kazuha (pictured) has a similar effect to Chulym. When an attack hits a vanguard during the battle in which she boosted, you may bounce a Duo unit and search your deck for a unit of the same name to add it to your hand (PR♥ISM-Duo, Aria would be a strong target). She can only be used in Duo builds, and is somewhat limited by needing to actually hit the vanguard. As such, she is both more unreliable and more limited than her Grade 0 equivalent. Image Master, Kukuri is the new perfect guard with the effect to Counter Charge when used. Generic decks will certainly use her over the sub-clan alternative, and she might well prove to be better than Aria even in Duo builds, if the player finds them to be too Counter Blast heavy. However, as PR♥ISM-Promise, Princess Leyte both Counter Charges and Soul Charges when returned from a rear-guard circle to hand (if the vanguard has PR♥ISM in its name), players using PR♥ISM decks will find that she is the superior option for fuelling other skills and use her in conjunction with the older perfect guards, allowing them to protect their rear-guards against units like Dragonic Overlord, the End. Extraordinary Freshman, Shizuku has a Generation Break 1 ability and Harmony, and when she is in Harmony, she can search the top five cards of the deck for a Grade 3 and add it to the hand. This is similar to the effect she had as a Grade 0, except she now has no cost. Shizuku makes continued Striding easier, and will be most potent when coupled with Miracle Voice, Lauris. Older bosses see good support with PR♥ISM-Duo Loretta, who is the clan’s Limit Break 4 enabler. 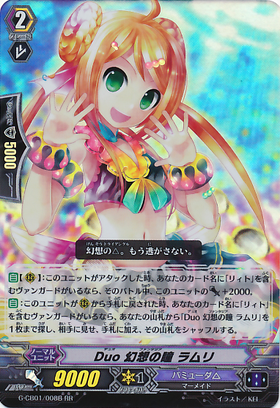 Duo Fantasia, Lamry (pictured) works especially well with Loretta, and is specific support for Duo Tempation, Reit. Lamry’s ability is to gain 2000 power when she attacks if the vanguard is Reit, but also can search another copy of herself from the deck when she is returned to hand. This is easy to activate by Soul Blasting 1 when Reit attacks, and allows Lamry to serve as fuel to re-stand Reit. Loretta allows this ability to be used even early in the game, so Reit looks to be a powerful option. Strolling Weather, Emilia offers the deck its first unit with Resist, and also offers a Generation Break 1 skill to draw a card when returned to the hand. This looks to be a strong choice for many decks, and offers some much-needed resistance to retiring effects. Two units, Glitter of Yearning, Spica and Unprecedented Girl, Potpourri have similar effects to each other. Both have a Generation Break 1 requirement, but differ in their reliability. Spica is able to pay one Counter Blast when she is boosted attacking a vanguard to choose another rear-guard, return it to hand and then call a unit from hand to the rear-guard circle and give it 5000 power. Potpourri has no cost, but is much more difficult to activate. Her attack has to hit a vanguard to return a rear-guard to hand, but in order to call another from hand, she needs to be in Harmony. As such, Spica will be the better choice for decks that can afford the Counter Blast cost. For PR♥ISM decks, PR♥ISM-Promise, Princess Celtic is well worth considering. When her attack hits a vanguard, she can Counter Blast 1 card with PR♥ISM in its name to return another rear guard to hand and draw a card. Victory Appeal, Filier allows the user to draw a card easily, requiring only Generation Break 1, one Counter Blast, and Harmony. 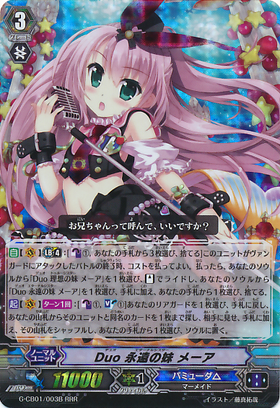 Duo Eternal Sister, Meer is the retrained version of Duo True Sister, Meer. She, like her Break Ride version, uses a Limit Break 4 for her ability, and so pairs well with PR♥ISM-Duo, Loretta. Eternal Sister, Meer’s ability is very strong – at the end of the battle she attacked a vanguard, she can Counter Blast 1 and discard three cards from the hand. If this is done, she rides Duo True Sister, Meer from the Soul at stand, and then adds herself from the Soul to the hand. As this is a re-ride, trigger effects given to her do not carry over, but it does allow the user to use the Break Ride ability every turn, should they wish. Her second ability allows her to add cards from the hand into the Soul, which allows her to be ridden before her earlier form without wasting her effect. Duo Lovely Angel, Nemuel adds a new Legion to the clan. Both she and her mate, Duo Lovely Devil, Vepar, attempt to be Counter Blast neutral, having hefty Counter Blast requirements, but being able to Counter Charge as part of their skills. Her active ability is to Soul Blast 1 Duo unit and return a rear-guard to hand, which triggers her main ability. At the cost of Counter Blast 2 when a unit is returned to hand, she can search the deck for up to two cards with the same name as that unit and add them to the hand. Then, you can reveal three cards with the same name as a unit on the Vanguard Circle to Counter Charge 2. This can be any combination of her and her mate, and, if used well, is essentially just a Soul Blast to gain two cards. Of course, the Counter Blast needs to be paid before her ability can activate, so the player needs to be conservative with their early Counter Blasts. Miracle Voice, Lauris is the dedicated Stride vanguard for the set. She has Harmony, and on Stride she can Counter Blast 1 to return a rear guard to hand and draw a card. Her Generation Break 2 activates when she becomes in Harmony, and chooses two units, gives them both 5000 power, and then she gains one critical. She is solid and dependable in any Stride deck, and the fact that she has no real cost for her Generation Break 2 ability means that her late game is strong. 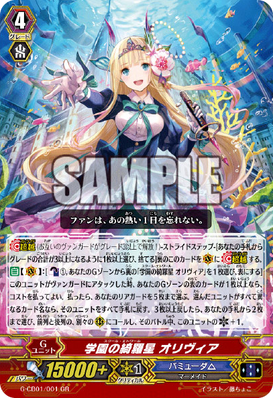 School Etoile, Olivia is the best unit to pair with Lauris. Her ability can only be used if she is the second stride, but it is very strong for the deck. At the cost of a Counter Blast and a G Persona Flip when she attacks a vanguard, she can choose up to five rear-guards with different names and return them to the hand. If three or more are returned, she can call them to separate rear-guard circles in the front and back row, and she gains one critical until the end of the turn. Clearly, this should be used to create a new column and apply pressure. Most of the time, she will be perfect guarded so the critical will not matter, but as she can create a full column and trigger several abilities at once, users will primarily find her useful for the mass bouncing effect. Leisure Soft Ribbon, Somni can prove to be a good Stride to use before Olivia. When her attack hits a vanguard, you return one rear-guard to your hand, choose up to one card from your hand, call it and give it 3000 power. She might not have the most powerful ability, but as an early Stride, she is a strong choice. PR♥ISM-Promise, Princess Labrador is a familiar face, even if her ability is completely different. She can G Persona Flip to choose up to two rear guards, give them 5000 power, and allow them to return to the hand at the end of the battle in which they attacked or boosted. This requires a PR♥ISM heart card, but is extremely strong, requiring no Counter Blasts at all and creating a very powerful column. In PR♥ISM decks, she will be the go-to Stride, as she is extremely reliable and consistent, so expect to see this card become very popular.

In conclusion, this set is very good for all Bermuda Triangle users. Not only does it bring new mechanics and boss monsters, it also brings new forms of several old favourites. In all, this brings Bermuda Triangle into the G-Era nicely, and is good for both new and old fans of the Clan alike.