First in the spotlight is Pale Moon’s Chainsaw Megatrick, Furnival. When this G Guardian is placed on the guardian circle  you look at the top three cards of your deck and put one of them into your soul and put the other two cards at the bottom of your deck in any order. If the card put in your soul was a Grade 1 or higher, Furnival gains his +5000 shield. This is probably one of the best G Guardians in the set as it helps with any Pale Moon deck and I doubt there will be many times when you look at the top three and they’re all Grade 0s.

Spike Brother’s get a fairly simple yet effective card with Excellent Cheer Leader, Ailie. When you have three or less rear-guards Ailie gets the +5000 shield. This is a very easy condition to meet with the new Charge keyword as your rear-guards would go to the bottom of the deck anyway.

Guardian General of Heavenly Water, Philothea gets +5000 shield when she blocks if it is on the first or second wave of your opponent’s turn. If your opponent relies on stand triggers and having their Vanguard attack last then this G Guardian will fall short but most decks these days tend to run eight to twelve critical triggers so her extra shield will probably work more times than not. 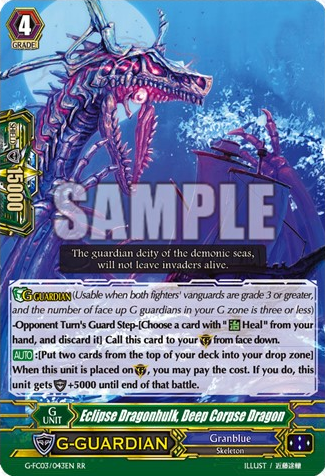 Granblue’s Eclipse Dragonhulk, Deep Corpse Dragon will have you drop the top two cards of your deck to gain a +5000 shield. This, like the Pale Moon G Guardian, is very helpful in any build for their deck. It is probably best not to use it too much as it can result in decking out but this can work very well in a Seven Seas deck as they are more reliant on random drops rather than more specific ones that the G decks are good at.

Lastly for the G Guardians is Dream Mutant Deity, Scarabegasus for Megacolony. His extra shield activates when your opponent has two or more rested units. If your opponent can get around this by not boosting their attacker though if you’re against Shadow Paladin, Tachikaze or Homura Raider then you may find that you can’t guard to his full might because your opponent won’t have many units of the rear-guard anyway. As with many Megacolony cards, it’s very situational depending on what deck you are up against but at least we still have the Cray Elementals if everything else goes wrong.

Overall, I think these G Guardians are a great idea seeing as the power was getting so high from strides, so this will help balance out the power as well as hopefully giving you longer and more enjoyable games. 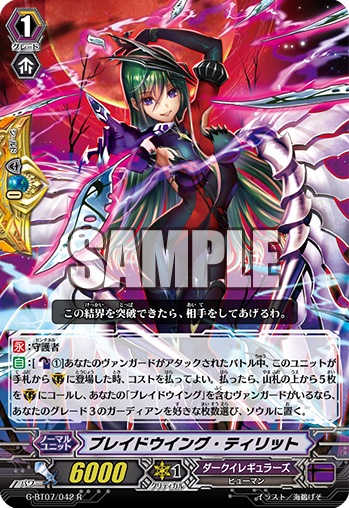 Now, onto something a bit different. As we have been given the new perfect guards with newer abilities, it’s only natural that we would also be given quintet walls with new abilities too. Blade Wing Tilith is one of these new quintet walls that works how you would imagine with a CB1 to call the top five cards of your deck but along with that skill you can also choose as many Grade 3 cards with “Blade Wing” in their name from the guarding cards and put them into your soul. This ability is mostly useful for putting Blade Wing Reijy and Wings of Reincarnation, Blade Wing Reijy into your soul but thanks to Blade Wing Sullivan, every guardian you have gains +10000 shield so the smallest possible shield you can get from a QW is 60000 because the QW itself will receive the extra shield. This will help you tremendously against Legendary Dimensional Robo, Daikaiser Leon and other cards that mess with your guardians. I would imagine you would max this at one or two in your deck as Dark Irregulars struggle with the whole decking out business. At least Tibold helps you out with that, still probably best not to run four copies of her though for the sake of your Counter Blasts too.

We’ve seen one other QW so far and that one is for Gold Paladin. Holy Mage, Irena seems to have been specifically designed around Gurguit but may help with future Gold Paladins. As well as the usual QW skill, she has a separate skill that activates when placed on the guardian circle from the deck. When that condition is met you can discard a card from your hand and put into your hand and put the top card of your deck onto the guardian circle and give it +5000 shield. Unless Gold Paladins get some seriously good counter chargers I would recommend using the original perfect guards for Gurguits skill, but what we’ve seen from Macia, good Counter Chargers are very likely. 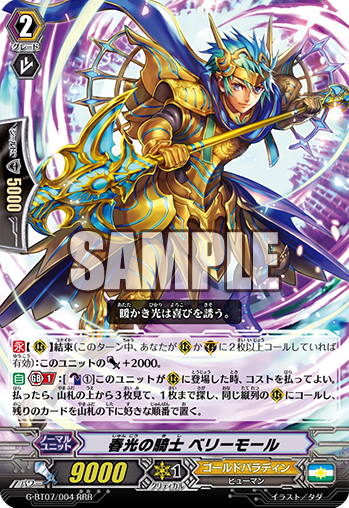 Gold Paladin also get a useful Grade 2 with Knight of Spring Light, Bellimor. He has a Unite skill that gives him +2000 power which can work on your turn as well as your opponent’s turn. As well as that, he has an on-call skill with a GB1 and CB1 that has you look at the top three cards of your deck to choose one and place it on a rear-guard circle in the same column as himself, and put the other two on the bottom of your deck. Only being able to call it to the same column is a pretty annoying restriction but this is what Dawngal was made for and there’s a good chance that the new Gurguit will help with this problem like giving all rear-guards a power boost when a card is placed from the deck or maybe giving all back-row units the ‘Boost’ ability.

There was one new card that we got a pretty good idea of the skill from the anime. The card is Interdimensional Dragon, Bind Time Dragon and it was a stride that the main antagonist used. From what people can gather it has a GB2 that activates when he attacks by binding one of your rear-guards (Not Time Leap) and he gains +10000 power and +1 critical. As well as that, your opponent then chooses one of their rear-guards to put at the bottom of the deck for every card in your bind zone. This seems like a very strong ability for the cost so I’m going to assume there is at least a Counter Blast involved though we won’t really know until we see it in the official spoilers. 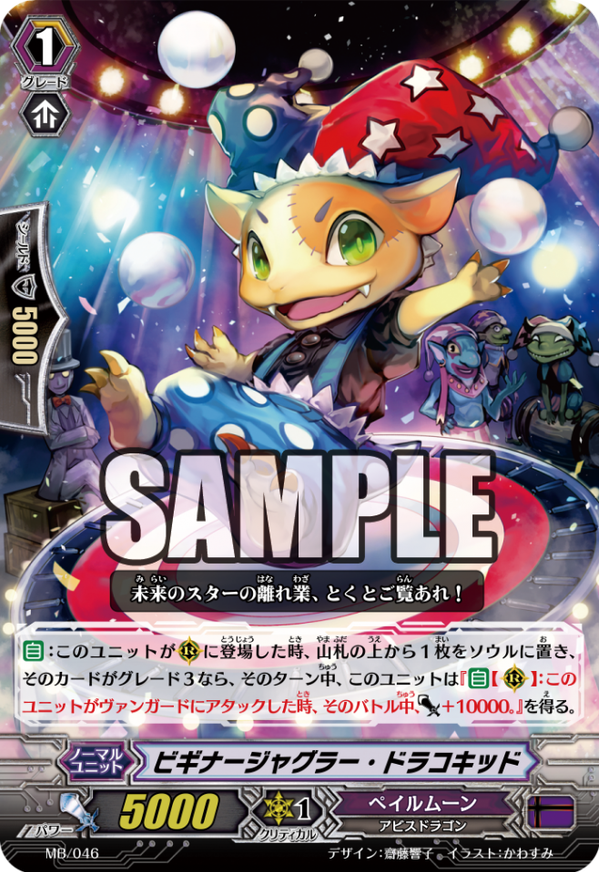 Other than all of that we have two little promos. One is quite interesting as it has the same treatment as Nega-keiopojisis and Avectro Zeus where its original art designed by a fan. This card being a Grade 1 Pale Moon unit named Beginner Juggler Dracokid. He only has 5000 power but when he is called to RC you Soul Charge 1, and if that card was a Grade 3, Juggler Dracokid gains +10000 power when attacking during that turn. He’s a very niche card but even if you are not relying on him getting the power, he still turns into a nice Soul Charger.

The other promo is a Grade 2 Gold Paladin, Knight of Slanting Radiant, Ledion. When this card enters Unite you can activate his ACT ability by Counter Blasting 1 for him to gain +3000 power; making him a 12000 attacker. It’s not a very exciting or strong card but at least it’s only a promo. We have no news of whether we will be getting these in English or not but, although he is niche, I would like to see people use Juggler Dracokid in the future.