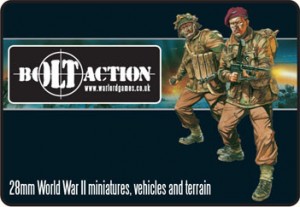 Here’s a press release we’ve had from Warlord Games:

Warlord Games and Osprey Publishing are teaming up to create Bolt Action: World War II Wargames Rules. Written by veteran game designers Alessio Cavatore and Rick Priestley, Bolt Action is a fast, fun 28mm wargame that rewards tactical play, but doesn’t get bogged down with excessive tables and charts. The main rulebook is scheduled for a July 2012 release, followed by a series of books covering the armies of the major and minor powers of World War II.

John Stallard, Managing Director of Warlord Games, had this to say: “Osprey has been putting out fantastic books for wargamers for as long as I can remember, and having a chance to work with them on Bolt Action was too good an opportunity to miss. With their commitment to high production values, I know the book is going to be something special.

Richard Sullivan, from Osprey Publishing, added: ‘You would be hard pressed to find a wargaming company with more combined industry experience than Warlord Games. We are excited to work with these guys on a game that is supported by such a high quality, extensive, and continuously expanding miniatures line.

Warlord Games have previously published the popular Black Powder and Hail Caesar rules, and Osprey has released hundreds of World War II titles over the years, making Bolt Action a dream collaboration between the two companies.

Looking to get started with WWII wargaming, or wanting to add some Bolt Action to an exisiting collection, you can pick up a wide range on our online store: Bolt Action