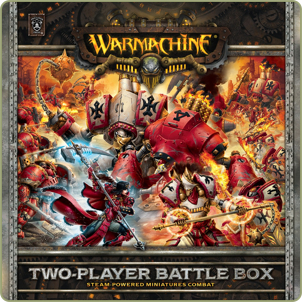 In Warmachine players assume the role of Warcasters as they lead their armies into battle.  Warcasters are impressive warriors that can call on legions of Warjacks (giant coal-fired robots) and squads of hardened warriors to aid them in battle. The core of each Warcaster’s force is comprised of his/her Warjacks. On its own a Warjack is capable of only the most rudimentary actions, but when controlled by a Warcaster its efficiency and deadliness increase dramatically. The careful use of Warjacks can decide a battle for a seasoned Warcaster.

Warmachine is a tabletop miniatures game where players collect, assemble, and paint models representing the various soldiers, warmachines, and creatures in their armies.

The starter also includes 17 plastic Warmachine models, each with it’s own stat card!

The Miniatures included in the Two Player Battle Box represent two good sized starter armies for someone that is interested in getting into Warmachine or existing players looking to extend a Khador or Menoth army. Whether you like the miniatures in this boxed set is to some extent a matter of personal taste, I love Khador for example and the miniatures in this set will be added to my Khador army :). Above and beyond considerations of personal taste the models in the boxed set are the same as those that can be bought separately, as such the Warjacks as extensively poseable; waists, shoulders & wrists are all able to be positioned independently. This means that a good degree of variety and character can be built in to each model.

Possibly the most impressive thing about the Two Player Battle Box is the great value for money it represents. The models included in this boxed set would retail at approximately £165 if bought separately.  That doesn’t include the rulebooks and smattering of gaming accessories included, the rulebook alone would also be worth another £10 or so (the softback full rulebook costing £20).

For existing or prospective Khador or Menoth players the decision of whether to buy the Two Player Battle Box or not is a no brainer, buying the models for either army separately would come to more than the asking price of this boxed set and the extra models could then either form the basis of a second army or be sold on / cost split with a friend.

Another great thing about the Two Player Battle Box is the 86 page softback rulebook, this is essentially the full Warmachine Prime MkII rulebook without the background information and unit data. This information is not vital and this mini-rulebook is really handy as it is much more portable than the full rulebook.  The full rulebook is roughly A4 and weighs over 1 kilo, the mini-rule book is a little smaller than A5 and weighs less than 100 grams.

Here is a link to a PDF of the Quick Start Rules: Front (mainly rules) & Back (mainly stat card data)

Also found in this boxed set is a mini No Quarter Magazine, this  includes several articles including a battle report and a couple of nice hobby guides.

All in all the Warmachine 2 Player Battle Box is a great way for someone that is interested in getting into Warmachine to get started and is also great for Khador or Menoth players to extend an existing army. The miniatures included in this boxed set are of the same high quality as those that can be bought separately and the boxed set represents excellent value for money, the various components costing more than double the cost of this boxed set if bought individually.

Finally the icing on the cake is the mini rulebook that contains the full Warmachine Prime MkII rules in a convenient little package.