Welcome once again to the weekly Vanguard update! We have got some exciting new Fighter’s Collection cards shown this week. Luckily this week’s update will be a lot shorter than last week’s four-parter but the reveals are just as good, if not better. 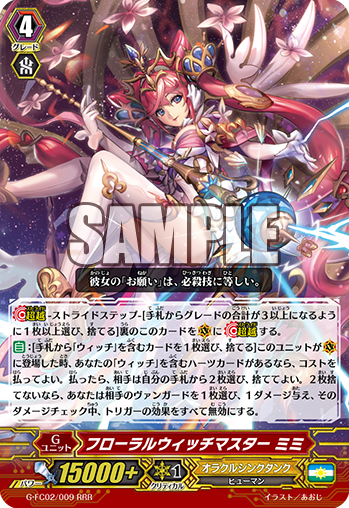 Seeing as Oracle Think Tank have had such bad luck with a lot of people finding the Susanoo support somewhat underwhelming it’s only right that they get some buff units to balance it out, and the best buff unit to get the job done is this young lady, Floral Witch Master, MiMi. Yes, the Oracle Think Tank Witches are back and better than ever! MiMi is a stride that comes in the next Fighter’s Collection and when she is placed on the Vanguard circle you may discard a card with “Witch” in it’s card name from your hand and if you have a “Witch” heart your opponent has to make the decision to either discard two cards from their hand or take one point of damage with all trigger effects of that check nullified. Due to this not needing a flip you can use her four times in a game and there are no restrictions on how much damage your opponent must be on so this skill can be the finishing blow. Your opponent will most likely have two or more cards in their hand at the time you use this but they may feel they can prevent more damage by keeping the cards in their hand so it’s a nice way to whittle them down. To ensure you have Witches in your hand while still keeping a stable field it may be wise to use Emerald Witch, Lala who can recycle your hand and Little Witch, LuLu for the extra draw. 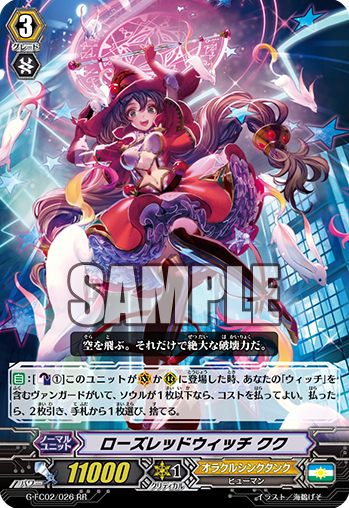 In case you’re struggling to claw your way towards a Scarlet Witch, CoCo this set has you covered for another Grade 3 OTT Witch. Rose Red Witch, CuCu is an 11k Grade 3 who can work both on the Vanguard circle and rear-guard circle. When she is placed on either of the before mentioned circles, if you have a Witch Vanguard, and you have one or less cards in your soul you may Counter Blast 1 to draw two cards and discard one card from your hand. This allows for a bigger chance of having Witches in your hand for MiMi’s skill. This will also give more defensive options in the long run to have an 11k Grade 3 which OTT Witches did not have before, though luckily we do now have Light Elemental, Peaker so you can get CoCo to the same defensive power as CuCu. What they really need now is some more Grade 1 and 2 Witches, though with such support people might call out “Overpowered!” but I personally think these Witches are really cool and deserve more support after all this time.

Pacifica gets more support in this set with Friend of the Sun, Malucca. Malucca’s ability is extremely useful for the new Pacifica stride, Twinkle Happiness☆Pacifica. When Malucca is returned to the hand from the rear-guard circle and you have a Pacifica Vanguard you may search your deck for a Pacifica card and put it into your hand. You may then reveal three Pacifica cards from your hand with different names to Counter Charge 1, Soul Charge 1, and give another unit +5000 power. Combining this with Twinkle Happiness☆Pacifica makes it extremely easy for Pacifica to gain the extra critical by making it a lot more consistent to have those three Pacificas in hand. 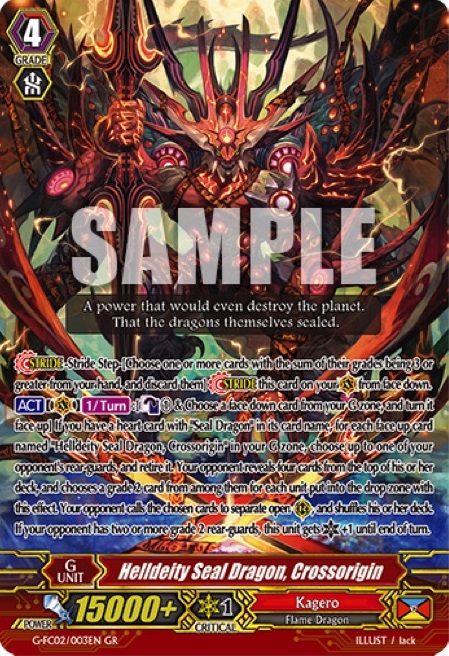 From cute mermaid idols to giant flame dragons of death, we have some Seal Dragon support for Kagero with Helldeity Seal Dragon, Crossorigin. Crossorigin has the ACT ability with the cost of Counter Blast 1 and turn any G unit face-up and for every face-up Crossorigin choose one of your opponent’s rear-guards and retire it, then for each rear-guard retired your opponent reveals the top four cards of their deck and chooses a Grade 2 from among them and calls it to an open rear-guard circle and then if your opponent has two or more Grade 2s Crossorigin gains +1 critical. This is a great, consistent unit for Seal Dragons and making it so your opponent has to call the units to open rear-guard circles is a nice touch. As we can see from the clans who had their two cards shown, the two cards a clan gets will work well together and are helping a certain build so we can expect another Seal Dragon unit.

Sword Physical Liberator, Magnus is a nice Grade 2 for Gold Paladin’s Bluish Flame Liberators. When Magnus is placed on a rear-guard circle from the deck and you have two or more cards with “Liberator” in their name on the Vanguard circle (Meaning you could have a Liberator legion, strode over a Liberator legion with a non-Liberator, or even strode over a single Liberator with a Liberator stride.) then you can look at the top three cards of your deck and search for one card with “Liberator” in it’s name to call to a rear-guard circle and put the rest at the bottom of your deck. If you called a Bluish Flame unit you may then put it into your hand. This allows you to have a better chance of using Prominence Glare‘s ability to drop a Bluish Flame to gain +1 critical and prevent your opponent from perfect guarding, and using Holy Flame‘s skill will give you a bigger chance of bringing Magnus out. 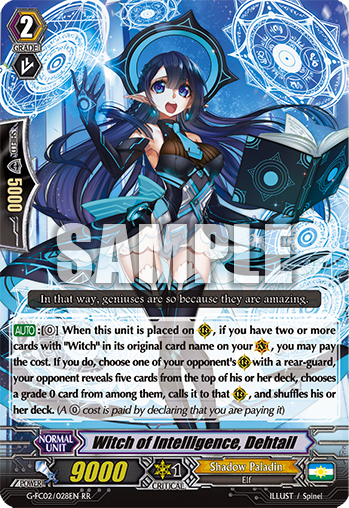 A new Shadow Paladin Witch has been shown, Witch of Intelligence, Dehtail. When Dehtail is placed on rear-guard and you have two or more cards with Witch in their original name on the Vanguard circle (This works the same as Magnus’s condition) then you can choose an opponent’s rear-guard circle that is occupied by a rear-guard and your opponent reveals the top five cards of their deck and searches for a Grade 0 from among them to call to that circle. As an SP Witch player I can say from experience how amazing this card really is going to be. The biggest worry with the new stride, Witch Queen of Transfiguration, Sinclair, was that your opponent wouldn’t have enough Grade 0s to activate her skill but this helps to pull it off and it’s a nice addition to have a rear-guard Witch who has a wider range of your opponent’s cards to work with to get those Grade 0s on the field. I will definitely be running this card but the Grade 2 slots in Witch decks are already very tight so watch out for what you take out for this card. 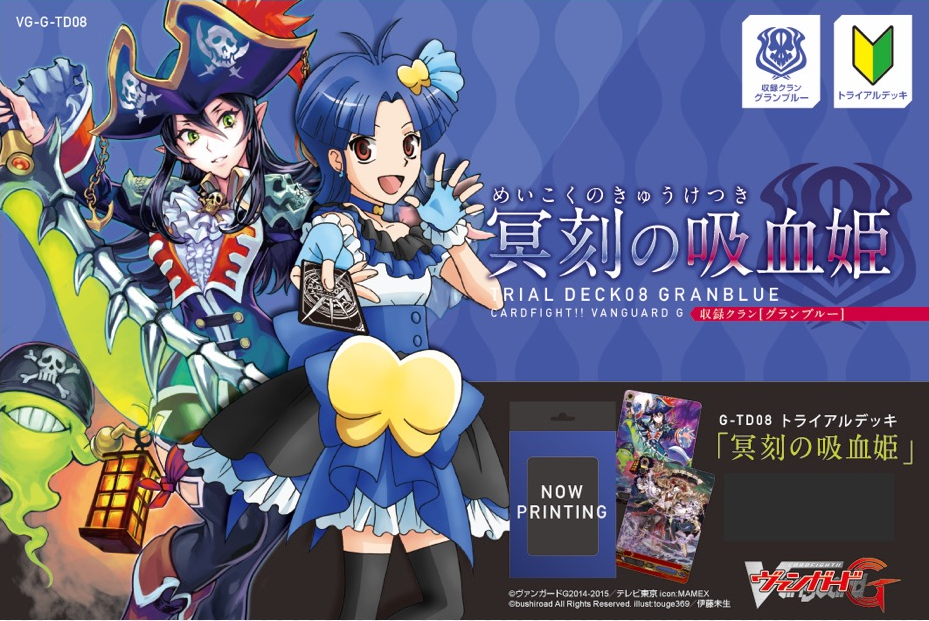 We have now had official announcements for G Trial Deck 8: Vampire Princess of the Hades Hour and G Booster Set 6: Transcension of Blade and Blossom. We have two cards officially confirmed for the Trial Deck and those are the Grade 3 Night Mist Vampire Princess, Nightrose (who can 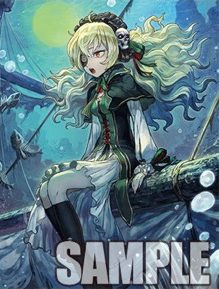 be seen to the left of the Trial Deck’s poster) and a reprint of a beloved critical trigger for Granblue, Rough Seas Banshee, with alternate art. This is a very exciting time for Granblue and I’m enjoying all this support for previously highly unsupported clans.

For the next Booster Set (Transcension of Blade and Blossom ) Royal Paladin, Shadow Paladin, Nova Grappler, Pale Moon, Granblue, and Neo Nectar are all getting additional support as well as some Cray Elemental cards. So far not much has been revealed about this new set. What we do know however is it will contain Secret Packs (Booster packs containing five Secret Rares) which will include reprints of Blaster Dark Revenger “Abyss”; Revenger, Phantom Blaster Dragon “Abyss”; Blue Sky Knight, Altmile; Ranunculus Flower Maiden, Ahsha; and lastly Exxtreme Battler, Victor. There are two new units for G-BT06 that have had their names and pictures revealed, these are the new versions of Altmile and Ahsha, Transcending the Heavens, Altmile and Ranunculus in Glorious Bloom, Ahsha. 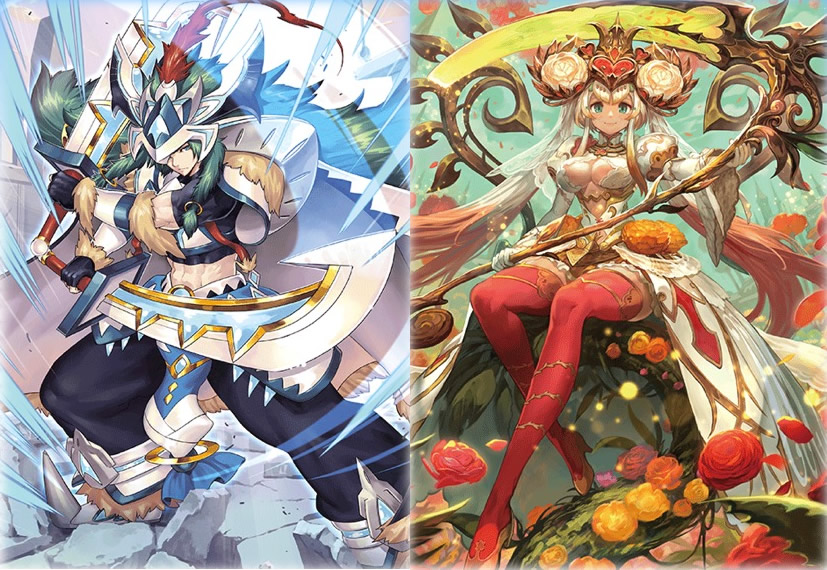 We also have the name revealed for a new Granblue stride, Mist Phantasm Pirate King, Nightrose and the pictures (but no names) for a Shadow Paladin dragon and a Nova Grappler Raizer Legion.

Lastly we just have a couple of promos. The first one is a Grade 1 Royal Paladin, Transition Sage, Lyron. When he is placed on a rear-guard circle you may Soul Blast 2 to draw a card. This is the second card that has this ability for Royal Paladin (The first one being Knight of Reform, Ladinas) though the previous one was also a promo so this may have just been 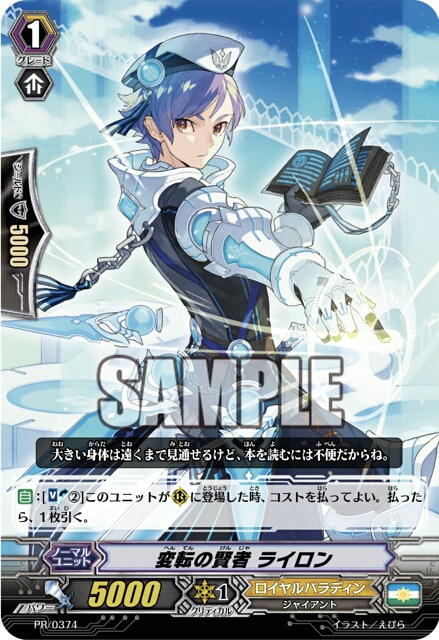 made to give people another chance of getting this kind of card. A big hand size is always nice but with a Soul Blast 2 in modern Royal Paladin decks it may seem like a very big cost to pay unless you have a lot of cards to fill the soul back up.

The second promo is for Link Joker. When Star-vader, Mulepton is placed on the rear-guard circle and your opponent has at least one locked card you may Counter Blast 2 to choose an opponent’s rear-guard circle and they must choose a card from their hand to place on that circle and locked. This will mostly be helping for Chaos Breaker decks and now that there is an efficient Counter Charger in the form of Confusion Star-vader, Zinc this card may see some play despite it’s high Counter Blast cost.

Well, this concludes this week’s update. The reveals this week have been very exciting a contain a lot of really cool and useful cards (But maybe I’m just saying this because of SP Witch support) and I hope the reveals stay just as exciting for next week well we’ll most likely see more Fighter’s Collection and hopefully some Granblue cards for the upcoming G-TD08 and G-BT06. Thank you for joining us this week and don’t forget to join us again next week for the cards revealed in the next seven days.