Welcome once again to the weekly Vanguard update! Fighter’s Collection 2015 Winter has shown the most amount of spoils throughout the seven days with a sprinkle of promos and some Granblue support which is always good. 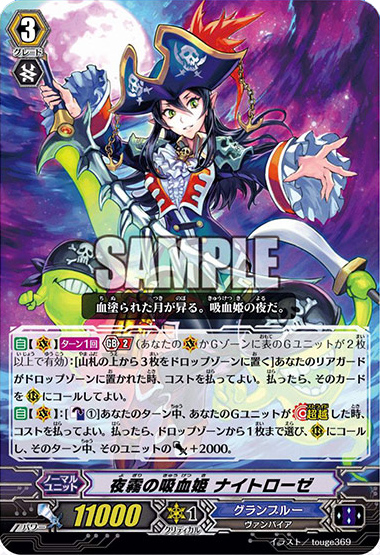 I think it’s only fair to talk about Granblue first, they’ve waited a long enough time. The first new card from the trial deck is their new Grade 3 boss, Vampire Princess of Night Fog, Nightrose. Many people have been waiting a long time to see this card’s ability and it shows that it was worth the wait. When a card would stride over Nightrose you may Counter Blast 1 to bring a card from the drop zone onto the field and give it +2000 power. This works very nicely with Sea Strolling Banshee to get some extra hand advantage. She also has a GB2 ability to bring back a rear-guard that was just retired by putting the top three cards of your deck into your drop zone. The GB2 ability will work great against clans like Kagero and Narukami but as most Granblue players may know you can’t use this kind of skill too often otherwise you will easily deck-out. Cocytus players will know the struggle… All-in-all though this card is really good to get and maintain field advantage. A keyword named “Hollow” has been talked about too though Nightrose herself doesn’t have it so rumour has it that it will be a rear-guard ability that takes effect once a card is put into or taken out of the drop zone.

Of course Nightrose isn’t alone, she also has her faithful stride fodder that even show in Nightrose’s artwork. Tommy the Ghostie Brothers are the standard “When placed on (RC), search for X” and “While you are paying the cost for Stride, this card gets grade+2.”. This has been shown to be a promo but the Ghostie Brothers may still appear in G-BT06 like how the original stride fodders were also promos.

The other promo is a Grade 2 Narukami unit, Eradicator, Unruly Dragon. When this unit intercepts you can Counter Blast 1 Eradicator, as long as you have an “Eradicator” Vanguard, to choose an opponent’s unit that isn’t attacking or boosting and retire it. We have seen this kind of thing before with the Kagero unit Lizard Soldier, Bellog and it’s nice to see them make more skills related to guarding. 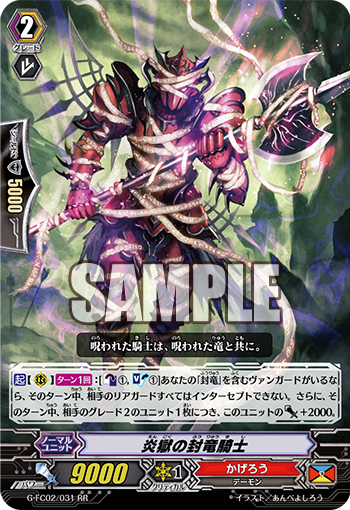 Last week we saw Helldeity Seal Dragon, Crossorigin and this week we get his Grade 2 support in the form of Hellfire Seal Dragon Knight. With a Counter Blast 1 and Soul Blast 1 you can prevent your opponent from intercepting until the end of turn and this unit gets +2000 power for every Grade 2 on your opponent’s side of the field. This card gets power even for your opponent’s Grade 2 legion mate which is always a nice way to even the battlefield. He will be especially powerful against G era Royal Paladins due to their heavy Grade 2 support with stuff like Techgal, so RP players will really have to change up their strategy when against Seal Dragons, not that they have much choice when it comes to Crossorigin though.

Beast Deity also get some more support with Beast Deity, Dragotwist, their new Grade 2 unit for Fighter’s Collection. He follows a pattern that has come about in the G series with Nova Grappler retiring. When he is stood back up during your battle phase you can Counter Blast 1 to choose one of your opponent’s rear-guards with power less than or equal to this card and retire it. You can use Brainy Papio and Cool Hank to get this guy stood back up and having Tribrut as your Vanguard will allow you to power up and retire two units instead, though with the downside of using up a lot of Counter Blasts. 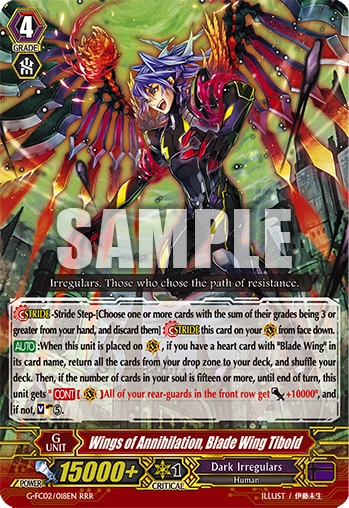 A while back Blade Wind, Sullivan was revealed as a new Blade Wing Grade 3 which planted a nice amount of hope for some more Blade Wing support and it turns out the hope grew into a card named Wings of Annihilation, Blade Wing Tibold. When Tibold is placed on the Vanguard circle and you have a heart with “Blade Wing” in its name, you put all the cards in your drop zone into your deck and then shuffle your deck. If you have fifteen or more cards in your soul then until the end of the turn all rear-guards in your front row get +10000 power, if you don’t have fifteen or more in your soul then you Soul Charge 5. Putting cards from your drop zone into your soul is what Dark Irregulars have needed for a long time and with the addition of Sullivan it was getting a bit desperate so with this card and Sullivan coming out in the next set it becomes a great little archetype to work with within the Dark Irregulars.

People’s predictions were correct about the identity of the Angel Feather stride, it is indeed a new Nociel card. Holy Seraph, Nociel allows you to choose two rear-guards to put into the damage zone at the end of that battle that Nociel attacked and if you have a Nociel heart, then you may choose two cards from your damage zone and call them to rear-guard and if they have “Nociel” in their name they get +5000 power. This allows for some strong extra attacks with the bonus that if you put Love Machine Gun, Nociel on the field then you can exchange your hand for some cards in the damage zone. Then you can also create some strong columns with Thousand Ray Pegasus. 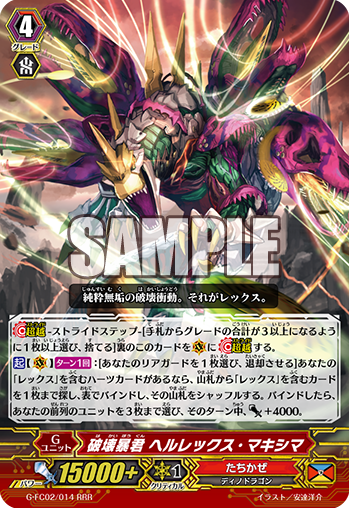 The last thing we have on our plate for Fighter’s Collection this week is the two new Tachikaze unit which gives support the Rex archetype. Our stride for Rex is Destruction Tyrant, Hellrex Maxima which has the ACT to let you retire one of your own units to then search your deck for a card with “Rex” in its name and put it into the bind zone, then you choose up to three units in your front row to give +4000 power. This card is especially good for Destruction Dragon, Dark Rex who can be superior called onto the Vanguard circle if your Vanguard’s attack didn’t hit, definitely an amazing boost that the Rexs needed.

Our second Rex is the Grade 3 Destruction Dragon, Squall Rex. When Squall Rex is in your hand you can put him into the bind zone to give a unit +3000 power. His second ability then works from the bind zone where you can retire a rear-guard and Counter Blase 1 when a card with “Rex” in it’s name attacks a Vanguard and call Squall Rex from your bind zone to the rear-guard circle. Providing you have Ravenous Dragon, Megarex on the field you could bring Squall Rex into the game while your Vanguard is still Grade 2 and get an extra attack in to give early pressure.

That’s all of the cards for this week. There was a lot of good support for all sorts this week. There aren’t many cards left to reveal for Fighter’s Collection and I will continue to hope for a Jewel Knight stride for the Royal Paladin spot. Thank you for joining us this week and don’t forget to join us again next week for the cards revealed in the next seven days.